The Fall of a Moth 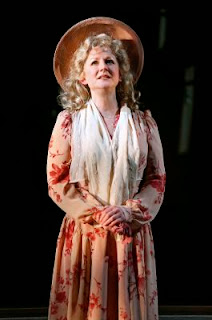 Who knew Tennessee Williams was one of ’s major comedic playwrights?

Comedy? Yes. Well, if comedy is measured by audience laughter then Williams is right up there with Woody Allen and Neil Simon, at least based upon the audience response to Yale Repertory Theatre’s current offering of Williams’ “A Streetcar Named Desire.”

Now, don’t get me wrong, this is a strong production, gripping and moving, with some stellar acting, but on opening night most of the play’s first act was punctuated by (perhaps knowing...or unknowing) laughter by those in attendance. The laughter took me back a bit. What’s funny about a woman on the brink of despair desperately searching for a drink? What’s humorous about a woman, a fragile butterfly, (Williams describes her as “a moth”) who must fantasize, lie to herself and the world, to keep a shaky hold on reality? And yet laughter there was. I don’t know if director Mark Rucker and his cast worked to generate the laughs: if they did, then they succeeded, if they didn’t then the guffaws must have been a bit of a shock to those on stage (i.e., What the hell is going on? We’re setting up a modern tragedy here and people are chuckling?) 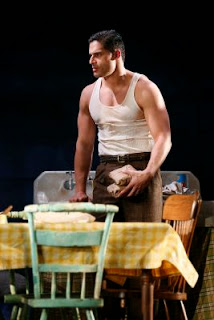 Audience reaction aside, this is a fine production of a modern American classic. For those not familiar with the story, Stella (Sarah Sokolovic) has married an ex-G.I., Stanley Kowalski (Joe Manganiello), and is now, circa 1947, living happily in somewhat downtrodden circumstances in New Orleans, but there was a time when Stella lived a more refined life, and she is reminded of this when her sister, Blanche (René Augesen) arrives for an extended visit. Unfortunately, Blanche arrives with a past haunted by more than the loss of the family plantation. Death continually whispers in her ear, speaking of the suicide of her young husband and the subsequent demise of her relatives, all of which she has had to deal with on her own. She desperately clings to sanity, but she has unwittingly traveled on a streetcar named Desire (read multiple meanings here) to meet her ultimate nemesis, for , sensing that Blanche is a threat to his marriage and his essence as Ur-male, soon sets out to destroy her. This he accomplishes in a chilling third act, as Blanche is ultimately carted off to a sanitarium, still relying on the kindness of strangers.

Central to the success of any production of “Streetcar” is the actor who portrays Blanche, and in Augesen the Rep gives us the epitome of the fragile, faded beauty Williams created, for Augesen’s Blanche is tremulous, proud, articulate and desperate. This Blanche is a sensuous lady who has been damned by her own sensuality, a strong yet fragile creature who continuously seeks the “magic” in life that has been denied her ever since she inadvertently caused the death of her young husband. Augesen’s body language enhances the idea that this is a woman on the brink: her hands flutter about as if they are caged birds, her body stiffens, her head jerks as if she is hearing voices. Hiding from the light (of day and reality), this Blanche seems doomed from the moment she tentatively walks on stage, only steps away from damnation. 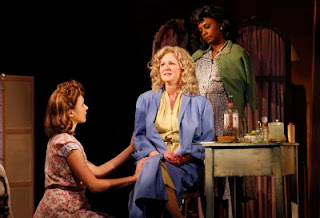 If Augesen seems to evoke the essence of her character, the same cannot be said for Manganiello, for during much of the evening his toughness and menace seem to rest uneasily on the surface. There’s a sense that the actor, a tall, well-muscled man, is having trouble evoking the essence of : he hooks his thumbs into his belt in a tough-guy stance, he jabs his finger a lot and raises his voice, but he can’t seem to help projecting the idea that “I’m not really like this.” However, in the pivotal third act, he seems to finally embrace the character he is portraying and becomes the caveman Blanche has described him as. His evisceration of the “moth” is riveting.

Of the three main characters, Stella, ’s wife, has always been the most problematic, with critics and playgoers alike questioning why this woman would stay with such a brutish, abusive man. However, Sokolovic’s portrayal of the young woman ably answers the question. She is a woman who understands her man and revels in their mutual physical attraction. She controls him in all the subtle ways that women train their semi-housebroken mates. Near the end of the play, just before Blanche is escorted out of the apartment, she tells her neighbor, Eunice (April Matthis) that if she believes Blanche’s story about what happened the night she was in the hospital giving birth then she can no longer stay with Stanley. In the end, like her sister, she opts for illusion over reality. This line, often criticized as being unbelievable, is, as delivered by Sokolovic, totally in character. 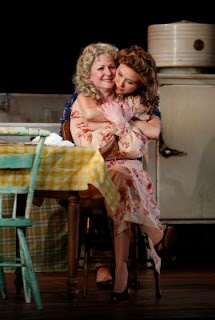 Some of Augesen’s finest moments are played with Adam O’Byrne, the play’s Harold “Mitch” Mitchell, Blanche’s ostensible suitor. The actor exudes just the right amount of need and naïveté as he tentatively courts Blanche, only to attack her after reveals her past to him, and then, in the closing moments, regrets his part in this fragile soul’s destruction.

All of this takes place on a single set, designed by Reid Thompson, that captures the essential seediness that Stella has embraced, an effect enhanced by Stephen Strawbridge’s subtle lighting, and the evening (well over two hours with two intermissions) essentially moves apace under Rucker’s direction. One might suggest that he give a little more attention to clarity of line delivery, especially with Manganiello, who seems, at times, to swallow his lines, and that, in the pivotal scene in which Stanley reveals to Stella all he has learned about Blanche, the song (“It’s Only a Paper Moon”) that Blanche is singing while she bathes could be more audible, for it is heavy with irony.

These, however, are minor points, for the Rep has put together an essentially strong cast and has done itself proud with this production. Blanche’s inevitable fall is charted with insight and growing tension, allowing the audience to have a truly cathartic experience. 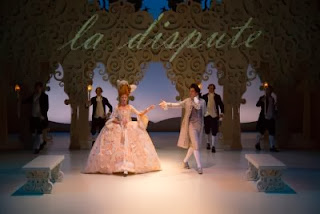 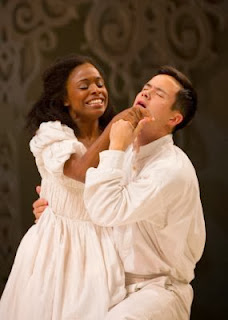 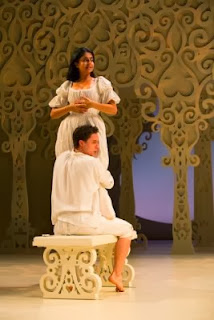 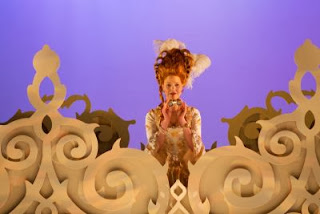 
“La Dispute” runs through November 10. For tickets or more information call 860-527-5151 or go to www.hartfordstage.org
Posted by Geary Danihy at 6:53 AM No comments: