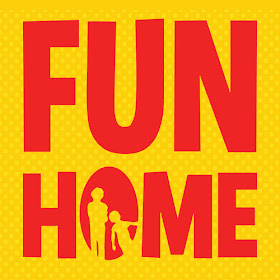 It may be true that there’s no place like home, but that can sometimes be read ironically. Such is the case with the household featured in “Fun Home,” an off-beat musical that recently opened at MTC Maintsage in Norwalk under the direction of Kevin Connors. Based on the best-selling graphic novel by Alison Bechdel, with music by Jeannie Tesori and book and lyrics by Lisa Kron, this musical, which has won multiple awards, dissects a family that is held together by the sheer determination of its members not to face the truth. “Annie” it ain’t but, then again, sometimes the sun comes out tomorrow to reveal who we really are, as disturbing as that might be.
The musical slides back and forth in time, anchored by three actors playing Alison at various stages in her life. There’s the Small Alison (Caitlin Kops) who is precocious and obsessed with drawing, the Middle Alison (the tremendously engaging Megan O’Callaghan), a college student, and Alison herself (Amy Griffin), who makes this something of a memory play as she revisits her family as they once were, all the while adding “captions” to the scenes and, parenthetically, the graphic novel she will eventually create.
The family also consists of the father, Bruce (Greg Roderick) and the mother, Helen (Raissa Katona Bennett) as well as two young brothers, Christian (Jonah Frimmer) and John (Ari Frimmer). To say the least, this is not a happy family, for as the opening number suggests, father, who is an English teacher, a part-time mortician (hence the Fun Home title – read funeral home) and a restorer of homes (yes, there’s irony there), wants things a certain way…his way. Simmering beneath this need for control there’s a rage that boils up on occasion, primarily directed at his wife, Helen. Why? Well, she has the misfortune of being the wrong gender.
Okay, Dad is in the closet, though the door is slightly ajar, a door that is flung wide open when Middle Alison, while at college, accepts that she is a lesbian (in scenes that profile O’Callaghan’s exceptional skill and talent as an actress). She writes home – her own apologia pro vita sua – and her letter leads to revelations and deadly consequences. This may all sound like so much soap opera foam, but it’s deftly and engagingly handled, especially since the emotions expressed in so many of the songs convey honest angst and justified confusion. These are not cardboard characters but “real” people trying to deal with the reality of their lives, as confused as that reality might be.
This is an ideal musical for MTC, given the enforced intimacy of the house, the thrust stage and the proximity of the audience to the actors. In essence, there’s no escaping the familial angst and anxiety portrayed on the stage, nor can you not become absorbed in the emotional travails of the characters attempting as best they can to figure out…well…how to live with each other and with themselves. Though there are no chart-topping songs in the show, many of them cut to the heart, no more so than the finale which has the three Alisons confronting each other in “Flying Away,” which brings us back to the touching start of the show when father and daughter shared a moment of exuberant innocence. You may not leave MTC humming a happy tune, but you will leave with Small Alison, Middle Alison and Alison herself imprinted on your mind for days to follow, as well Helen’s haunting rendition of “Days and Days,” an attempt to explain and describe to Middle Alison what it has been like to live with Bruce, to maintain a fiction while raising a family. It cuts to the quick and captures the essence of what Muriel Rukeyser once wrote: “What would happen if one woman told the truth about her life? The world would split open.”
“Fun Home” runs through May 6. For tickets or more information call 203-454-3883 or go to www.musictheatreofct.com.