Things We Do For Love -- Westport Country Playhouse -- Thru Sept. 7 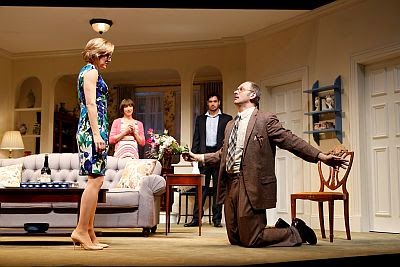 There are many views on why Adam and Eve got booted out of , but what can be taken as a given is that it had something to do with love, or lust, or both. You can forget about all that Tree of Knowledge stuff, because both sexes apparently have not learned anything from that experience. Eve is still offering the apple and Adam is still willingly taking a bite, and then things get messy.

British playwright Alan Ayckbourn has made a career out of creating various Adams and Eves (and an occasional Lilith), placing them in their contemporary Edens, and then letting all hell break loose, and since we are all the sons and daughters of the original offending couple, we nod and laugh as we recognize parts of ourselves in the characters as they grope, grapple and sometimes grovel their way towards a semblance of happiness.

Such is the case with “Things We Do For Love,” which recently opened at the Westport Country Playhouse under the direction of John Tillinger. This sprightly comedy of millennial amatory manners and mores pleases on many levels once its stellar cast overcomes some extended exposition and a serious staging problem. 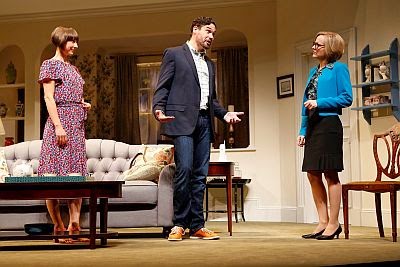 Set in a posh area of London, the play opens with Barbara (Geneva Carr) fretting and fuming about the condition in which recent tenants have left her upstairs flat, while Gilbert (Michael Mastro), a postman who rents the basement-level flat (more about these flats later), lectures on hot-water heating systems.

Thus begins a lengthy piece of exposition that establishes Barbara as something of a bitchy neat-freak, character development that continues with the arrival of Nikki (Sarah Manton), an old school friend who, along with her fiancé Hamish (Matthew Greer), will be moving into the offending flat until their own house has been remodeled. The two old school chums have an extended conversation that serves to cement Barbara’s personality (her nickname at school was “Spike”) and her general distaste for men and marriage, as well as Nikki’s history of abusive relationships. It all could have been handled in half the time.

Hamish soon arrives and the expected antipathy between him and Barbara is quickly established (as soon as it is we all know where said dislike is heading).  After a long taxi down a very long runway the play finally takes off as Barbara and Hamish inevitably fall into lust, Gilbert’s obsession with his landlord is revealed, and the lovers must face the reality of breaking the news about their affair to Nikki. 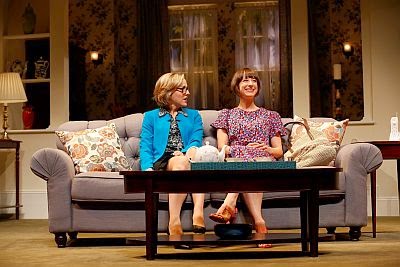 The four actors have a field day with Ayckbourn’s humorous, often biting dialogue, with Carr leading the way, for the actress delightfully details in manner and delivery of lines why her character earned her school nickname. Playing off her “spikiness,” Greer’s Hamish is a rough-around-the-edges Scotsman (much is made of his lineage by Barbara) who gives as good as he gets from Barbara, especially in a fight scene near the end of the second act (directed by Robert Westley).

Playing the somewhat mousey, much-put-upon Nikki, Manton is faced with a difficult task, for in creating her character she must walk a very thin line, showing Nikki’s fragility while not allowing her to turn into an emotional cripple. This she does with a great deal of style and nuance.

And now to the problem with the staging. Scenic designer James Noone was presented with the daunting task of creating Barbara’s main-floor quarters (where most of the action takes place), while also providing space for the actors to interact in both the upstairs and basement flats. The upper unit can be seen through a window that stretches two-thirds of the way across the stage. When the actors are in this area we either see just their legs or, to be fully seen, they must either be horizontal (on the bed) or scrunched down on a trunk. This mainly works, but the same cannot be said for the basement flat, for when the actors go “downstairs” they basically disappear – you can hear them, you just can’t watch them (fortunately, much of the dialogue written for the basement scenes is quite vivid, painting scenes that cannot be seen).

Slow take-off and disappearing actors aside, “Things We Do For Love” is a generally enjoyable, often hilarious take on the mating game, with all of its pitfalls. Ayckbourn’s choice of pronoun in the play’s title is apt, for what we see up on stage is funny because, it’s what WE do as we fall in and out of love, and as we laugh we also squirm just a bit.

“Things We Do For Love” runs through September 7. For tickets or more information call 203-227-4177 or go to www.westportplayhouse.org.
Posted by Geary Danihy at 6:26 AM