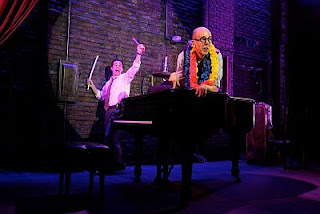 Summer used to be re-run time on television, when the networks ran shows you’d already seen just to fill time. At Long Wharf Theatre, summer has been “fill time,” when the theater’s creative staff takes a break and brings in packaged shows to keep the lights on and, hopefully, the seats filled. This time around, it’s Murder for Two, an Agatha Christie spoof of sorts, with music, that’s been all around the country, including Broadway. It’s easy to see why this 90-minute mélange of silliness is so often produced: a relatively simple unit set and a cast of two indefatigable actors. If nothing else it’s easy on the production pocketbook. Whether it’s entertaining remains to be seen.

The premise is pure Christie: a host of characters is brought together at a creaky old mansion, there’s a murder and everyone becomes a suspect. The twist is, a la The Mystery of Irma Vep, that all of the characters are played by the two actors: Ian Lowe plays the detective (who’s not really a detective yet), and Kyle Branzel has the Herculean task of playing all of the suspects: the wife of the writer who has been murdered, a dysfunctional couple who are neighbors, a psychiatrist, a ballerina, the writer’s niece, three choir boys and an Irish fireman (don’t ask). Except for the choir boys (bargain basement Dead End Kids), they are all suspects because they’ve all been featured, warts and all, in the writer’s novels: hence, the motive for murder.

The evening gets off to a shaky start mainly because exposition, i.e., establishment of the characters and their relationships, must be delivered by the two actors, with most of the task falling to Branzel (his only prop is a pair of black horned-rim glasses). It is, to say the least, a bit confusing, made more so when the actors speak over each other, creating a verbal stew that’s difficult to digest. Branzel uses body language and voice modulation to create the characters but it takes a while to sort out exactly which mannerism denotes which character.

Things finally settle down, at least with regards to who is whom, and the play proceeds with the usual gathering of facts and red herrings, all punctuated by songs that while tuneful are hardly memorable. To add to the actors’ tasks, they both must play the piano to accompany the songs (this they do quite well, with more than a touch of Victor Borge and Chico Marx in their playing styles).

The first 40 minutes of the show seem to drag a bit, but after there’s a second murder the silliness is stepped up a bit. There’s a running joke about cell phones ringing, a member of the audience is enticed onto the stage to play the second murder victim, the choir boys get to sing about all the horrible things they have seen, the Irish fireman (perhaps the high point of the evening) appears with his “hose” and does his River Dance shtick and the dead writer’s widow finally gets to do her big number (I guess you can call it the 11 o’clock number). Cats screech, lights flash, things crash, glitter confetti falls and, eventually, the mystery is solved, as if anyone in the audience really cares.

The basic problem with Murder for Two is that it is a skit that goes on for too long. Writers Joe Kinosian and Kellen Blair (Kinosoian wrote the music, Blair the lyrics) had a good though not original premise, and they throw in some knowing film and Broadway allusions, and there are some truly funny moments, and hopefully Branzel and Lowe are getting paid triple-time for their efforts, but the show seems mired in its premise and, save for the fireman and the choir boys, it just goes around and around in an eventually tiresome circle. There’s something a bit off-putting about farce that tries too hard to be funny.