"The Lion" Sings at Night


Fathers and sons – mothers and daughters. There seems to be a natural arc to the relationships. There is an initial bonding, a cleaving, followed, when the children are a certain age, by a pulling away, an antagonism that seems to be built into the species. Fathers stare at sons, mothers stare at daughters, and it is as if they are viewing each other from different planets. Finally, for most, there is a resolution, a re-acquaintance, as it were, on a different level, when sins are forgiven, foibles forgotten and resolution of the relationships occurs. But what if the father or mother passes away before this resolution can occur? Then it falls on the shoulders of the children to work it out for themselves. Such is the stuff of the enthralling “The Lion,” which recently opened at Long Wharf Theatre. It’s a one-man show that, primarily through music, deals with the three stages described above, a touching, heartfelt attempt to fit the pieces back together again, deal with life’s travails, and find peace with self.

Written and performed by a multi-talented Benjamin Scheuer, under the direction of Sean Daniels, the 70-minute show begins with Ben’s father, a mathematician and professor, giving his son a hand-made toy banjo, for Ben’s father is also a guitarist, and he and his young son bond by playing together. Yet all is not idyllic – there are shadows. His father finds fault with Ben for his lack of acumen in math, and when Ben asks his father to teach him to play the guitar “like him,” his father rejects the idea.

Ben’s story unfolds mostly through song, as Scheuer plays several different acoustic guitars and one electric guitar. The actor moves from chair to chair, picking up one guitar after another, and takes the audience through his life: his father’s death, the family’s move to Britain, Ben’s rejection of his family and return to the States, his first love and his battle with cancer. 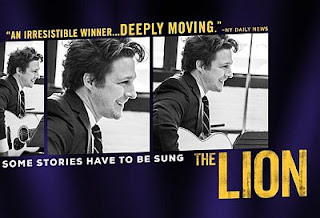 All the while, it is the guitar – and songwriting – that keeps Ben attached to his father. Sometimes Scheuer sings, sometimes he just talks as he strums melodies, but the overall effect is mesmerizing, and the effect, or multiple effects, are enhanced wonderfully by Ben Stanton’s lighting design – as the mood shifts there are hues of blue, or red, and when Ben is facing his possible death from cancer he is lit by footlights that cast multiple shadows up onto the walls designed by Neil Patel that are reminiscent of those one might find in a cellar coffee house of the 60s. 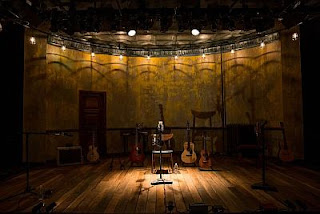 And what of the show’s title, “The Lion”? Well, when Ben was a child his father would sing him a song about what it meant to be a lion, what was the source of the lion’s essence. Scheuer sings this song, as his father would have, early in the show, and he returns to it for his finale, creating one of the most moving moments in theater I have seen in quite a long time. It’s the same song, but it now carries greater weight, not only for Ben but also the audience, a weight that speaks to both the heart and the soul, and it’s sung with an energy and passion that vibrates throughout the theater. When Scheuer strums the final chord the audience couldn’t wait to leap up and deliver a standing ovation, one of the few that has been truly deserved in the past few seasons.

In an encore, Scheuer, a truly accomplished guitarist and a fine actor, repositions the capo halfway down on the fretboard of his guitar to recreate the sound of that hand-made banjo his father made for him so long ago and reprises the opening song about said banjo. It’s a wonderful moment. Scheuer, now without coat or tie, his shirt open, sleeves rolled up, shoes and socks off, has, over the 70 minutes, bared himself to the audience…and the audience responds. As for the resolution? Well, Ben finally comes to realize that his father didn’t want him to play the guitar “like him,” he wanted “me to play the guitar like me.”

“The Lion” is a wonderful reminder that theater, drama, and storytelling come in many forms. The benchmark is, and always have been, at the final curtain (in this case a blackout), has the audience been moved, has it experienced something that has spoken to its shared humanity? Scheuer’s story is not an uncommon one – perhaps we have all experienced a variation of it. That doesn’t mean it is banal. Scheuer has managed to merge his passion and his pain into a presentation that deals with the essence of being human and the challenges inherent in growing up.

As Scheuer stood to acknowledge the applause, going up on his bare toes, he motioned to the audience and said, “You’re wonderful.” From the audience, several voices cried out, “So are you.” That’s probably the best review of this show.