Arms and the man I sing…


Thus begins Virgil’s The Aeneid, one of civilization’s first “war stories.” It seems that ever since man has taken up arms he has felt compelled to chronicle his experiences in the storm of battle and, in quieter moments, reflect on what he saw, heard, felt and contemplate his service, how it echoes in his soul.


Many memoirs have been written about a soldier’s life, but on Friday, March 31, and Saturday, April 1, the voices of those who have served their country will “sing” their own particular stories at the Wien Experimental Theatre located in ’s for the Performing Arts.


Billed as “War Stories: A Veterans Project,” a creation of Peter Van Heerden, Nina Bentley, and Sonya Huber, it has been underwritten by grants from the National Endowment for the Arts, the CT Office of the Arts and Fairfield’s Quick Center. The evening will feature 13 men and three women in a performance work that will allow them to give voice to what they experienced during their time of service and, perhaps more important, what they have had to deal with since they left the service.


Most of the participants are homeless veterans from ARBI/Homes for the Brave in , an organization that, since 2002, has provided safe housing, vocational training, job placement, and life skills coaching to help more than 1,000 individuals -- primarily veterans -- leave homelessness behind.


As Van Heerden explained at a recent rehearsal at the black box theater, the production is an effort in “courageous story telling,” for many of the actors are “at war every single day of their lives.” They are men and women who served their country and who, after their service, “are not supported by the system.”


Before beginning rehearsal the actors, none of whom have ever acted before, gathered together to speak about why they had chosen to become involved and what the project means to them. Kenny, who did not serve but has become part of the project, said that he did so “to learn something new,” to prove to himself that it’s “something I can do.” Nate, a former Marine, said he enlisted in the service because his brother was killed in . “I enlisted because I wanted vengeance,” he said. Participation in War Stories is “something to keep me active.” 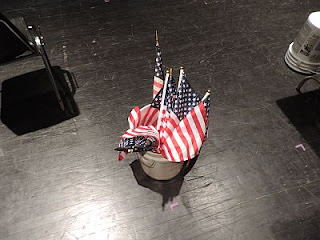 These are primarily homeless men and women whose days can seem to stretch on to eternity and whose lives have perhaps lost meaning. Ricky, who served in the Army, signed on with War Stories because it was “something new, challenging.” As the former GI fell silent, Van Heerden emphasized that one of his goals, a goal he is imbuing in his actors, is that he wants them – and their stories – “to connect with the audience.” He would come back to that theme later on in the rehearsal.


Ronald, who also served in the Army, was also intrigued by the possibility of experiencing something new. “It’s all about expressing myself,” he said, “talking about what I’ve experienced in my life.”


For Ronald and the other members of the cast, it would also seem to be about the opportunity simply to be heard, to have someone listen, attentively, and perhaps understand. Too often they are seen as mere statistics, faceless shadows, forced to be mute in a society that has neither the time nor the interest in hearing their stories.


Romano (“You know, like the cheese.”), who served in the National Guard, said that being involved in War Stories was interesting because he “liked to be creative.” Aubrey, who served in the Army, put a different spin on why they were all there. “Many veterans,” he said, “never step out of the box,” meaning that they can’t break out of the constrictions that they find themselves defined by, either by society or themselves. Acting is Aubrey’s effort to step out of that “box.”


James, a Coast Guard veteran, said that Van Heerden and Bentley came to Homes for the Brave to speak about the project and he thought, well, “I can talk about the issues.” Then he added, “Maybe this will be my big break,” a comment that elicited laughter and a bit of joshing from his fellow actors.


Although the atmosphere in the theater was convivial, there was also an underlying tension, not so much about the upcoming show but, it would seem, the very fact that the production was urging these veterans to open up, to verbalize, to confront what many of them may have kept bottled up. Christina, sitting in the back row, the only woman of the three in the show who made it to this rehearsal, referenced an earlier remark made by Van Heerden. “It’s like what Peter said, about how we fight a war every day.” She tussled her hair and smiled. “I wanted to get involved with this group, to get myself out into the world.” She said she had gone through a rough patch over the past three months, didn’t elaborate, but there was a sense that the cast knew what she was referring to, if not the specifics then the general sense of dealing with chimeras.


Her words stirred Felix, an ex-marine, to speak up. He said his story, the one he would tell in the show, was “very deep.” He paused, considering his words, then said, “They turn you on, they flip a switch, and then when you get out,” meaning out of the service, “they don’t turn you off.” Asked to explain, he said, “The trigger is always there.” He shrugged. “A lot of vets get into trouble.” Joseph, also an ex-marine, spoke up: “I had war stories in me before I even enlisted – inside of me. This,” gesturing at his surroundings, the black box theater, “is therapeutic.”


And what, exactly, is the therapy? Well, part of it is learning how to be an actor. James commented: “I didn’t realize it would be as hard as it is. It’s not just about reciting lines. It’s all the little details that make the show.” No, perhaps it’s not just about the lines, but maybe it is. Nate looked around at the group and said “If it wasn’t for this we wouldn’t be communicating the way we are with each other. I call it fellowship.” With that, Romano chimed in: “It’s like getting stuck in a fog, but every time you talk it gets a little better.”


With that, Van Heerden sat forward and spoke directly to his cast. “Everyone is on stage,” he said. “Everybody will have their moment.” He turned to expand on what the cast has been preparing. There will be ‘The Telephone Call,’ which explained all of the phones sitting on the chairs and tables. “It’s the first call you make when you get on base – who you call – and maybe it’s the last call you will ever make. 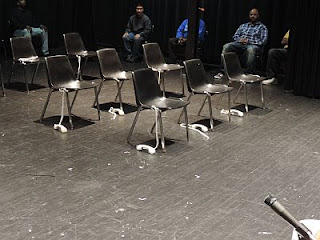 Then there’s the ‘Flag Sequence.’ Everyone made their own flag.” Apparently there’s been discussion about a proposed sequence in which the American flag will be allowed to fall to the floor. The cast was silent as Van Heerden became more animated. Perhaps the audience will react negatively to allowing the flag to hit the floor. “We want to make the audience complicit,” Van Heerden said. If they react to the flag falling, a symbol, then “how could you let that man fall on the ground?”


“We want the audience to ask that question themselves,” Christina said. 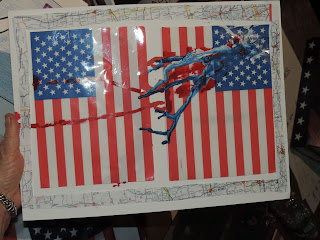 These actors – this cast – are all venturing into an unknown world, not just the world of the theater but a world that will allow them to say what they have to say, to confront an audience that represents a society that has often chosen to disregard or deny the pain and suffering they have gone through, the dismissal of their humanity. The trust they have placed in Van Heerden is palpable. As Gerald pointed out, “It’s like two prize fighters – you go into the ring and all you see is the other fighter, but when the round is over and you go to your corner there’s the trainer, the coach, telling you what to do. He can see more than what you can see. You gotta trust your coach, do what he tells you to do.”


After speaking about what they were doing and what it meant to them, the group got down to the business of rehearsing. Specifically, Van Heerden started to run though the opening moments of the show when the cast members will be sitting in chairs ringing three sides of the theater. As the audience walks in the actors will be talking amongst themselves, quietly. Van Heerden urged them to go for restraint, to create a tension without any overt movements or gestures so that the audience will get a sense that there are stories being withheld, stories they can’t quite hear yet. Yes, it’s theatrical, but it looks like it will work. This will be followed by each one of the cast members being called to the microphone.


At this moment in the rehearsal the transformation in the cast was electrifying, and spoke volumes. As the cast members’ names were called, each stood, executed a sharp left or right turn, strode confidently to the microphone and in a military voice, a voice not heard before that day, announced their names and their military affiliations, if there were any. It was a roll call and they were responding as they had been trained to do. These homeless veterans knew about discipline, knew about duty, knew about camaraderie and dedication to the service. They were once again standing proud and tall and answering the call of duty.


During a break in the rehearsal, Berice, an Army veteran who had arrived late, was asked why he had chosen to become involved in the show. He smiled. “Well I volunteered,” he said. “A while ago, I became an electrician because I was scared of electricity.” He looked out at the stage and his fellow actors. “I want to do this,” he said. 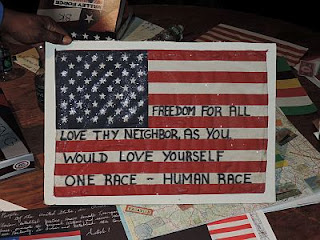