There’s supposed to be a pot of gold at the end of the rainbow, but for Judy Garland, born Frances Ethel Gumm on June 10, 1922, there was only debt, alcohol and pills. She died in 1969 of a barbiturate overdose. She was 47. Earlier this season, Goodspeed Musicals treated us to the start of ’s glorious yet troubled career in “Chasing Rainbows.” Now, at MTC Mainstage, we get to see the yellow brick road’s dark terminus in “End of the Rainbow,” billed as a play with music.


Created by Peter Quilter, and directed by MTC’s artistic director, Kevin Connors, “Rainbow” provides something of a schizophrenic experience for the audience, for there are many of the glorious songs made famous to enjoy as, at the same time, we watch a woman falling apart. Thus there’s a mixture of delight and pain, all served up by the marvelous Coleen Sexton who has the Garland mannerisms down pat and offers a performance that it is at times riveting, at others poignant, and always compelling.


The play is set mainly in a hotel room where and her fiancé, Mickey Deans (Luke Dranell), are living while she performs at ’s Talk of the Town nightclub for a five-week run that will become her penultimate public appearance before her death. , as deftly portrayed by Sexton, is haunted by the persona, one colored by the “suffering diva” image that many of her ardent gay followers took a perhaps somewhat masochistic delight in embracing. This aspect of ’s life and later career is captured by Anthony (Thomas Conroy), her accompanist, who feels it’s an honor to serve “Miss Garland.” Jealous of her attachment to Deans and concerned that she is destroying herself (that very aspect of Garland’s personality that, ironically, drew many homosexuals to her), late in Act Two he “proposes” to her, a heart-wrenching scene that Sexton plays with subtle nuance, using body movement and facial expressions that convey her character’s great need to be taken care of, to be sheltered.


The Deans character is conflicted, for he too wishes to take care of , who is deeply in debt, but he also perhaps sees her as his meal ticket. At first weaning her from pills and liquor, he fails her when she has a partial breakdown and refuses to continue her show at the Talk of the Town (escaping to her room in the hotel). He gives in to her addictive needs and offers her pills.


This scene is sandwiched between two that are perhaps Sexton’s finest moments, for , before she escapes to her room, is somewhat addled on stage, fighting with the microphone cord, bumping into the microphone stand, and confused about the songs she is supposed to sing. After Deans offers her the pills, Garland returns to the stage to belt out a signature song – “Come Rain or Come Shine” -- with Sexton’s performance suggesting the source of many of Garland’s signature mannerisms: the clutching of the arms, the manic movement of her hands, the herky-jerky body movements, the almost perverse infusion of her very being into the delivery of a song. It suggests that what we are seeing is not so much a performance as a soul writhing in agony.


If one quibble might be registered about Sexton’s portrayal of the tortured artist it has nothing to do with Sexton’s talent but rather with a make-up decision. Early in Act Two Anthony helps her with her make-up, suggesting that she looks a mess. Fortunately for Sexton, she doesn’t, but unfortunately for the characterization, there is no visual sense that this is a woman who has been ravaged by booze and Ritalin. Some subtle but deft usage of make-up suggesting this deterioration would seem to be appropriate here. 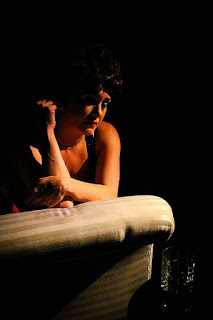 Backed by a multi-talented, four-member orchestra (Thomas Conroy, Henry Lugo, Chris Johnson and Gary Ruggiero) and working with a very functional set created by Jordan Janota and some lovely, subtle (no more so than in the final scenes) lighting by Michael Blagys, Sexton consistently mesmerizes and fascinates as she creates a character who is at one moment a foul-mouthed bitch and the next a frightened, insecure child adrift on the sea of stardom, the talented Frances Gumm – the little girl with the big voice – at war with the Judy Garland who delighted millions with her performances yet could find no enduring delight in her life. In the intimate MTC setting you can’t escape the painful reality of a star becoming a nova that eventually explodes and consumes itself, and you will never respond to “Somewhere Over the Rainbow” – the show’s final song -- in the same way after seeing this show.


“End of the Rainbow” runs through April 23. For further information or ticket reservations call the box office at 203.454.3883 or visit: www.musictheatreofct.com.
Posted by Geary Danihy at 5:10 AM