Bill the Bard…Forsooth and all that Jazz 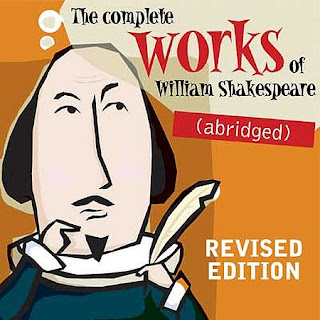 If silliness be the food of great evenings, play on.


Shakespeare! Oy! All that iambic pentameter stuff. And the words! “Bastinado.” “Beadsman.” “Chapless.” And what are we, citizens of the twenty-first century, to make of: "Touch you the sourest points with sweetest terms, / Nor curstness grow to the matter"? Say what?


Well, shed your Shakespearean fears, my friends, for Playhouse on Park has opted to stage “The Complete Works of William Shakespeare (abridged) [Revised],” a romp through the Bard’s works that takes no prisoners as it cuts, slices, dices and otherwise dismembers the texts that have weighed heavily on the minds of high school students for decades. The satire by Adam Long, Daniel Singer and Jess Winfield first saw the light of day at the Edinburgh Fringe Festival in 1987 and has since been produced numerous times around the world. In , as directed by Tom Ridgely, it’s a fast-paced (one might even say “manic”) take-down of the pretentious approach to Shakespeare’s plays and the attendant scholarship.


The cast? Well, Shakespeare didn’t have any problem with SAG contracts, so he filled the stage (albeit with males). So, too, does Playhouse on Park, but with only three actors: Hanna Cheek, Rich Hollman and Sean Harris, who play the roles of, well, Hanna, Rich and Sean. You see, the evening is something of a post-grad seminar delivered by a professor on Angel Dust, with the three actors attempting to explain and elucidate the plays. It’s lunacy from start to finish, and a hell of a lot of fun.


It all begins with the actors bemoaning the audience’s lack of knowledge and appreciation for Shakespeare’s plays, followed by a biography of the Bard that somehow segues into Adolf Hitler’s life story. That sets the tone for the rest of the evening as the three actors attempt to present all of Shakespeare’s works on a bare, thrust stage, using whatever props are at hand.


The jokes come fast and furious, and there’s a lot of improv on the cast’s part depending on how the audience is reacting. Most of the Bard’s plays are taken care of in the first act, including a “Folk Othello” song written by Rich Hollman that evokes the 60s era of Peter, Paul and Mary. But the evening’s not over because, alas (and alack?), “Hamlet” has not been dealt with. Hence, the second act, which takes on the famous play both forwards (plus fast-forward) and, yes, backwards – and Harris’s inability to deliver the iconic “To be or not to be” soliloquy is priceless…and humorously mirrors most of the audience’s familiarity with the text – we can get to “that is the question” and then, well, it’s yadda yadda and mumble mumble.

All three actors are literally on the run from start to finish, and they don’t seem to miss a beat or a cue, regardless of where they have to exit (wearing a wig or a garbage bag) or enter (wearing a crown or water buckets), and they effortlessly beguile audience members to take part (screaming, running or chanting) in the farcical staging of “Hamlet.”


As good as Hollman and Harris are, and they are very good, when Cheek is on stage, which is often, she simply exudes her own spotlight. She’s blessed with an innate (okay, perhaps learned) sense of comic timing, has a wonderful projection of dramatic (and comedic) body language and, well, simply knows how to engage an audience, which is no more evident than in the “song-and-dance” routine she goes through to kill time until the two other actors make it back to the theater – apparently they’ve gone next door to A. C. Petersen’s for some ice cream. Hopefully, Playhouse on Park will invite her back, for she lights up the stage.