Tell Me a Story

Storytelling existed long before writing came on the scene. There is, perhaps, something in our DNA that responds to the words: “Let me tell you a story” or “Once upon a time.” Well, give you DNA a treat and get up to Hartford Stage to see, and be enchanted by, Sharon Washington’s “Feeding the Dragon,” a gentle yet penetrating story of a young girl who essentially grew up in a library.


This one-woman show, written by Washington, co-produced with Primary Stages and under the perceptive direction of Maria Mileaf, has as its controlling image the dragon of the title, which is the coal-burning furnace in the basement of the library where Washington lives in the top-floor apartment with her father, who is in charge of maintenance, her mother and her dog, Brown. When the library is closed, Washington has the library to herself and she makes the most of it, reading fiction, non-fiction and reference works. She is essentially an autodidact, yet she is also a little girl in an adult world that often does not make total sense and holds surprises that will challenge her fairy-tale existence. 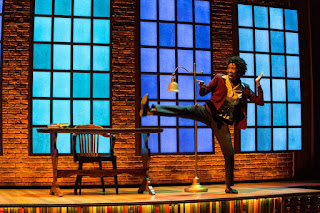 Though there is only one person on the stage, the evening is filled with characters: the father whose roots are in South Carolina and can count change in several languages, the mother who prides herself on being a “New Yorkah,” a grandmother who demands that Washington be “polite,” and a host of other relatives and acquaintances, including a bartender and a watermelon man.


Washington could probably just sit on a stool and still mesmerize the audience, but instead she roams the set designed by Tony Ferrieri that evokes a library but, with the three large, multi-paneled windows upstage, allows lighting designer Ann Wrightson to work some very subtle visual emphasis. All of this is supported by dead-on original music and sound design by Lindsay Jones. The technical aspects of the show are as subtle and low-keyed as the performance, but they all work together to create 90 minutes of magic. 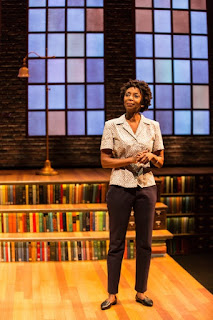 Washington grew up in the early 70s, a troubled time that saw riots and strikes and a sense that the world was tearing itself apart. The library, and the books housed therein, were Washington’s shelter from much of the strife, but an extended piece late in the show, when she and her father travel to South Carolina to see relatives, hints at the tangled web of racism, as does a beautiful set-piece with Washington’s uncle, an artist who lost his leg in an accident and refused a prosthesis because it was not the right color. Then there are the boxes hidden in the back of her mother’s closet, boxes that contain dreams and aspirations never fulfilled – they evoke the world of “might have been.” As Washington reveals what those boxes contain, her words and body language transport the audience to that dark closet and what it reveals. It is a lovely, haunting moment.


Washington makes her points softly, gently, but she makes them. She eschews stridency and opts to create an atmosphere that draws in all members of the audience regardless of race or gender, for her story, as with all good stories, speaks to humanity, deals with the drams and fantasies of the young and the rude awakenings that must come to all of us.


Late in the one-act  performance I turned around from the second row to gaze up at the audience. No one was moving, there was no fidgeting, all had been captured by the art of Washington’s storytelling, and when the lights came up after her final line – “I am the story” – many audience members were wiping tears from their eyes.


Today, many theatrical productions opt to shock us with their messages. Washington has opted to “whisper” her message, and it is tremendously effective. She is a compelling, physically adroit actress whose stage presence cannot help but draw in the audience. She tells what appears to be a simple story, but if you pay attention, her story touches on what all good stories offer: the essence of what it means to be a human being and the “quest” that we have all experienced, that journey from child to adult containing moments of delight merged with moments of fear and ill-defined insecurity.


“Feeding the Dragon” runs through February 4. For tickets or more information call 860-527-5151 or go to www.hartfordtsage.org.
Posted by Geary Danihy at 5:23 AM