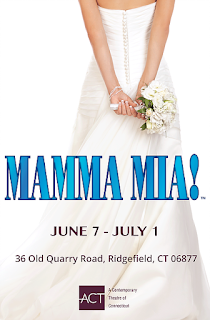 There’s a new kid on the block – ACT (A Contemporary Theatre) of CT – and it bears watching. The creation of Broadway veterans Daniel Levine and Katie Diamond, the Equity production company is nested in a thoroughly renovated building (complete with a stage turntable) on what is known as the Schlumberger property in Ridgefield, Ct. It’s certainly not located on the main drag – you travel up hill and down dale before you get to the yet-to-be fully paved road that leads to the venue, but it’s worth the trek, especially since the company’s inaugural production is Mamma Mia!, a guaranteed crowd-pleaser with over 5,000 Broadway performances to its credit.


There’s probably little need to provide more than a brief synopsis of the musical’s book, written by Catherine Johnson. It’s really a jukebox musical created by Benny Andersson and Bjorn Ulvaeus that showcases many of the hit tunes of ABBA, a Swedish pop group that dominated the hit charts from the mid-70s to the early 80s. Thus, the book is slight. Basically, Sophie Sheridan (an engaging Emily Rogers) is getting married to Sky (Paul Schwensen). She wants her father at the ceremony, but she doesn’t know who her father is, since her mother, Donna (the always riveting Juliet Lambert Pratt), had three contiguous affairs some 20 years ago with Harry (Victor Hernandez), Bill (Craig Ramsay) and Sam (Michael Hunsaker). The solution? Invite all three. They accept and arrive on the small Greek island, as do Donna’s old friends and fellow performers, Tanya (Jodi Stevens) and Rosie (Sheri Sanders), a threesome once known as Donna and the Dynamos. Of course, confusion ensues, but it all works out in the end.


As directed by Levine and choreographed by Jason Wise, this is a high-energy show (some may find it, at moments, just a bit too overwhelming…and a bit too long) that offers hit tune after hit tune with brief forays into exposition. There’s no denying the cast’s enthusiasm to entertain. Rogers is the perfect ingénue – a young girl on the brink of adulthood, both fierce and fragile. Her voice is clear and pure, and she creates a quite believable Sophie. As her mother, Pratt delivers whenever she’s on stage, especially with Donna’s signature song, “The Winner Takes it All.” Many are probably familiar with Meryl Streep’s take on this song in the filmed version of the musical – it was driven by underlying anger and thus carried with it a lot of dramatic, accusatory gestures. Pratt’s take on the number is more subdued and plaintive – a soul expressing its pain. You can’t help but be moved.


Donna’s sidekicks – Tanya and Rosie – are essentially stereotypes: Tanya the vamp and Rosie the buffoon, and Stevens and Sanders are just fine in delivering what needs to be delivered. Stevens does a sexy turn with “Does Your Mother Know?” and Sanders nails it with “Take a Chance on Me.” In fact, everyone delivers, from the leads to the ensemble. If there is any complaint to be registered about the production it rests with sound designer Daniel Lundberg’s work.


From the opening notes of the overture, the sound simply assaults. It would work, perhaps, in a 500-seat venue, but the ACT theater is quite a bit more intimate, and the house seems to be constructed to be acoustically sensitive. Thus, the sound created by the eight musicians located behind an up-stage scrim seems to blare and the actors are over-miked, creating a feeling that everyone is belting out the songs even when belting is not called for. There also seems to be some unnecessary echo and reverb effects. The show would certainly benefit from a decrease in decibel level (perhaps even a consideration that the actors really don’t need to be miked at all?)


The sound notwithstanding, there’s no denying that it’s difficult not to be swept up in the enthusiasm and talent up there on the stage, especially evident in “Voulez Vous,” the first act’s closing number, and the encore numbers ending with the exuberant “Waterloo,” when the stage seems to erupt with dancing bodies, creatures resurrected from decades ago that evoke a somewhat psychedelic era that often made little sense but was a hell of a lot of fun…and fraught with funkiness.


This is an abbreviated season for ACT. Next year the company plans to offer Evita, as well as Working, a lesser-known musical by Ridgefield resident Stephen Schwartz (he of Pippin and Wicked fame) and the quirky 25th Annual Putnam County Spelling Bee. It will be interesting to see how this production company, with its stated goal of bringing Broadway to Ridgefield, matures and refines its personality and creative cachet.


Mamma Mia! runs through July 1. For tickets or more information, go to www.actofct.org.