When we see a play or a musical, we seldom are aware of what has gone on behind the scenes before the curtain rises on opening night. Most theatergoers are not privy to the various rehearsals, including the laborious and time consuming tech rehearsal (when, among other things, the sound and lighting cues are worked out) that brings the production to life (or doesn’t, as the case may be). Well, if you’d like a peek at these goings-on, get yourself over to the Westport Country Playhouse where Theresa Rebeck’s often hilarious “The Understudy” is currently being offered. As directed by David Kennedy, the play is basically a rehearsal where anything that possibly can go wrong does – theatrically and emotionally – and makes for an enjoyable two hours (no intermission) that may drag a bit at moments (possibly just a bit too much discussion of the Kafka mind-set), but has enough high points to easily get you through the evening.


The opening scene may be a bit confusing for some in the audience, for Rebeck immediately breaks the fourth wall by having Harry (Eric Bryant) enter, fire a gun and stroll down the aisle house right. The fourth wall? Well, when you look at a stage (in most productions), you have stage left, right and up-stage. Down-stage is usually defined by where the stage’s apron ends, and the actors “act” as if there is a fourth wall erected there that is, of course, not there at all, else the audience could not see what’s going on. 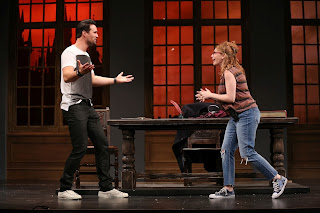 Harry ascends the stage in front of the curtain (this is called a scene-in-one, which normally allows for set changes). He proceeds with a monologue that deals with an actor’s frustrations, including gripes about Hollywood blockbuster movies that require a minimum amount of acting talent and a maximum number of explosions and other special effects. It’s only when Jake (Brett Dalton) appears, an actor in the play being rehearsed, that it becomes apparent that Harry has been venting to an empty theater. Ah, so the fourth wall really hasn’t been broken…the theater itself is the stage.


Jake challenges Harry’s presence – he’s apparently not supposed to be in the theater. Harry runs off, the curtain rises and Roxanne (Andrea Syglowski), the stage manager, appears to begin running the rehearsal. But Harry is supposed to be there – he’s Jake’s understudy, and the rehearsal has been called to run him through his lines and the play’s blocking. There’s one more character, “Laura,” who’s never seen or heard from, but “Laura” is responsible for many of the laughs the show delivers, for she is in charge of running the sound (compliments of Fitz Patton) and light boards, but apparently she is more than one toke over the line (or often mysteriously absent), so over the course of the evening, sets (deftly designed Andrew Boyce) roll in and out at inopportune moments, lights come up or go down with a mind of their own (at one point the theater is plunged into darkness, forcing the actors to use flashlights), and sound cues either arrive too early or too late, much to Roxanne’s frustration. Another unseen character is “Bruce,” the star of the show who makes mega-millions starring in the blockbusters Harry disdains. It doesn’t take much of a stretch to assume that Rebeck is alluding to Bruce Willis. 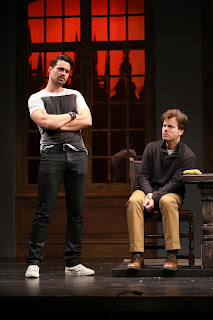 The play being rehearsed? Well, it’s never named, but it’s a recently discovered drama by none other than Franz Kafka, which allows Rebeck to offer up a lot of allusions for those familiar with Kafka’s work, from a castle and a trial with no apparent crime to, yes, of course, a bug. It also allows Jake, whose main claim to fame is the action films he has starred in (appropriately, Dalton will be familiar to many as Agent Grant Ward in the ABC series “Agents of S.H.I.E.L.D.”), to prove that he’s not as shallow as Harry thinks he is (a running joke is a line of dialogue – “Get in the truck!” – from Jake’s last film that Harry taunts Jake with). However, some of the play’s slower moments have Jake pontificating at length about “meaning” and existentialism, much to Harry’s confusion.


These are actors rehearsing a play, but they are also people with outside lives, and this fills out what otherwise might have been a simple behind-the-scenes story about boarding a play. Jake feigns unconcern, but he is eager to learn if he’s landed a role in an upcoming film, so he’s often on the phone with his agent. Dalton’s delivery of his side of these conversations is excellent, no more so than when his character gets the final call, which he takes off stage, standing in the semi-dark house right. It’s a subtle yet deft piece of acting.


As for Harry and Roxanne, they have a history. In fact, Harry disappeared two weeks before they were to be married, which has left Roxanne emotionally scarred, a scarring that translates to controlled anger that finally bubbles over. This allows Roxanne to deliver a pain-filled monologue late in the show that is, for the audience, cathartic, for those watching have been waiting for Roxanne to let it all hang out and Syglowski delivers.


The play is filled with a lot of theatrical “in” jokes that many audience members got but were lost on others. However, what’s not lost is the controlled chaos that often occurs during a tech rehearsal as well as the two different acting styles evinced by Harry and Jake. Jake just wants to deliver his lines, but much to Jake’s and Roxanne’s growing frustration, Harry is constantly breaking character to ask for “motivation” or to question the logic of a scene or piece of blocking. It’s another running joke, often quite humorous, no more so than, again late in the show, Harry, in character, is dealing with life and death issues then abruptly stops to once again ask about motivation. It was unexpected, and after a beat or two, the audience erupted with laughter.


The actual rehearsals for “The Understudy” must have been very interesting, for there are so many scripted mishaps and intricate lighting (kudos to Matthew Richards) and sound cues and scene changes that all seem wrong and mistakes but are integral to the play that it must have taken a while for the actors to adjust and become comfortable with the mayhem. After all, in a “normal” play when you deliver a line about a violent storm descending and it doesn’t appear, well, you feel naked on the stage; when you’re working with one set and it suddenly slides off stage for no apparent reason you are a bit nonplussed.


Putting aside the “slow” moments, which, thankfully are few and far between, “The Understudy” is a delightful comedy that often borders on farce, with just a touch of slapstick, and the final scene, choreographed by Noah Racey, which has Harry and Jake doing a silly dance, is delightful. It captures, visually, the essential wackiness inherent in the play, a Chaplinesque answer to the angst, anxiety and darkness that was Kafka’s stock in trade. Much praise to director Kennedy for grasping all of the comedic opportunities in the play and coaching his cast to deliver them with style, grace and a great sense of timing.


“The Understudy” runs through September 1. For tickets or more information call 203-227-4177 or go to www.westportplayhouse.org
Posted by Geary Danihy at 9:58 AM