Murder for Two -- Playhouse on Park -- Through February 3 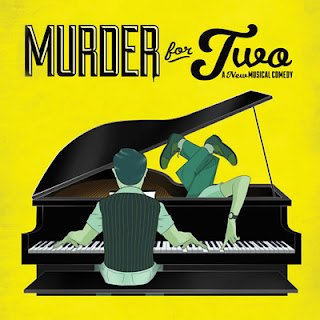 What if Agatha Christie had written one of her mystery novels under the influence of peyote while Irving Berlin was staying with her as a house guest? The result might very well have been Murder for Two, a zany musical whodunit that recently opened at Playhouse on Park in West Hartford. Under the sure-handed direction of Kyle Metzger, with a book by Joe Kinosian and Kellen Blair, music by Kinosian and lyrics by Blair, this exercise in controlled silliness takes a tried-and-true Christie premise – a murder in a manorial home with all present as possible suspects – and infuses it with Marx-brother’s manic zaniness, all created by just two piano-playing actors.


The evening opens, appropriately, with a murder. A surprise birthday party has been planned for Arthur Whitney, author of numerous mystery novels. However, as soon as he enters he is shot in the head. Who could have committed such an evil act? Soon on the scene is a police officer, Marcus (John Grieco), who hopes to be promoted to the rank of Detective. While the actual Detective is on his way, Marcus decides to solve the case and thus garner the attention of his boss, something he knows he can do if he just follows protocol, which means interviewing all of those present.


Quite a few have been invited to the party, and part of the silliness is that they are all played by one actor – the rather deft, agile and talented Trevor Dorner. Over the course of the evening he’s called upon to play the murder victim’s wife plus a femme fatale ballerina, a bilious businessman and his wife (whom he claims has murdered before), a psychiatrist, a young college student writing her thesis on murder and members of a boys’ choir.


So, it sounds a bit like Irma Vepp or the 39 Steps parody, but there’s a difference, for both actors play the piano, and much of the plot development and interrogations are done via song. There’s an early paean to the value of “protocol,” and, perhaps the high point of the evening, three of the members of the boys’ choir bursting out into song. Then there’s the murder victim’s wife just dying to sing her show-stopping song (she finally gets the chance).


Along the way there’s quite a bit of audience interaction, starting even before the lights go down. At one point, an audience member is invited on stage to portray a man dying of poison. All of it requires a huge suspension of disbelief, but if you buy the premise early on you won’t have any trouble embracing this one-act exercise in pun-riddled goofiness.


Is the murder solved? Well, yes, although to accept the resolution you can’t be a slave to logic. Oh, yes, you will also learn who stole the party’s ice cream. Of course, the murder investigation is merely the frame to allow two very talented actors to show their stuff and their piano-playing prowess. It’s a tongue-in-cheek production from start to finish and a must-see for those who don’t demand that every theatrical production deliver a message and deal with relevant, soul-searching issues. Sometimes you just go to the theater to have fun.
Murder for Two runs through February 3. For tickets or more information call 860-523-5900, X10, or go to www.playhouseonpark.org
Posted by Geary Danihy at 7:32 AM