Reel to Real -- Playhouse on Park -- Through April 7

The choreographer Merce Cunningham once said, “You have to love dancing to stick to it. It gives you nothing back, no manuscripts to store away, no paintings to show on walls and maybe hang in museums, no poems to be printed and sold, nothing but that single fleeting moment when you feel alive.” The truth of that statement, especially the feeling “alive” part, can be confirmed by traveling to West Hartford’s Playhouse on Park to view its current production of Reel to Real, an offering by stop/time Dance Theater, PoP’s resident dance company, that captures visually the definition of “exuberance.” If you’re feeling a bit down or out of sorts I suggest you hasten up to PoP, buy a ticket and feel your spirits rise and the “Blue Meanies” run for cover (or perhaps start dancing)


So, who will you see on the stage? Well, there’s a speech-language pathologist, several teachers, an administrative assistant at a plastics company, a medical assistant, a volunteer for Dog Star Rescue, a project manager for The Hartford, a physical therapist, a director at an IT consulting company and a dentist (really!). What do they all have in common? Well, obviously, a passion for dance as well as the fact that most of them have been dancing since they were tykes.


As directed and choreographed by Darlene Zoller, who is also the co-founder and co-artistic director at the Playhouse, Reel to Real’s premise is that a man gets locked in a movie theater and, a la Woody Allen’s The Purple Rose of Cairo, screen characters come to life. That’s about it in terms of plot, but plot is not really that important, it’s just the premise that allows Zoller to create some wonderful moments on PoP’s intimate thrust stage.


The show opens with a number from Chicago – “Mr. Cellophane” – that Rick Fountain nails. The musical will be revisited later on during the evening with an entrancing performance of the “Cell Block Tango” and, much to Zoller’s credit, this is not a slavish rehash of Bob Fosse’s choreography. As she commented after the show: “We did our own thing.”


This tour of music and dance numbers from the silver screen gets one’s mind a-working, and if you don’t peek at the program you start thinking: “I wonder if they’ll do…” Well, they can’t do everything (alas, there’s no Fred and Ginger dancing in the dark), but they do hit a lot of high spots, including “When You’re Good to Mamma,” from the aforementioned Chicago, which the talented Amanda Forker belts out with appropriate brio. 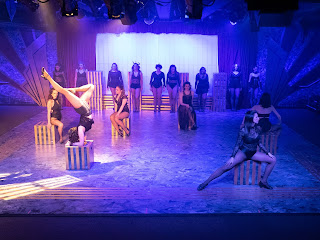 Then, from Singin’ in the Rain, there’s the witty “Moses Supposes,” featuring Fountain, Forker and Meredith Longo. Six dancers do a rendition of “Somewhere in the Night” from La La Land, there’s a nod to Mary Poppins (“Step in Time”), and the whole shebang wraps up with two numbers from The Greatest Showman, although I must admit that I wished they had taken on “Come Alive” from that film, but no one asked for my opinion when the show was being put together.


If there’s one false note in the show, it’s the closing number for the first act, which is a “Disco Star Wars” piece that seems to go on forever and not have a clear, conceptual focus. However, one quickly gets over this, for the evening is filled with number and after number that seems to shimmer and shine, no more so than when the entire ensemble is on stage. Whether it’s “Good Morning Baltimore” from Hairspray, “Rhythm of the Night,” featured in Moulin Rouge, or a sensuous take on the “Bohemian Dance” from Funny Face (during which, thanks to the number's principal dancer Alicia Voukides, you’d swear Audrey Hepburn has come back to life), there will be moments that evoke some very fond movie-going memories, and even if you’re not familiar with all of the films referenced, you can’t help but be swept up by the cast’s enthusiasm and talent. By day, they may be teachers, admin and medical assistants, a dentist and an IT consultant, but by night they are dancers, and although it may not pay the rent, it’s obvious that dancing and performing brings joy and passion to their lives, and that joy and passion is lovingly offered to the audience.


This is a show that can’t help but make you smile and perhaps tap your toes, one that might even evoke the thought: “You know, I’d like to see that again.” It runs through April 7. For tickets or more information call 860-523-5900, X10, or go to www.playhouseonpark.org
Posted by Geary Danihy at 8:22 PM