Less Than it Seems 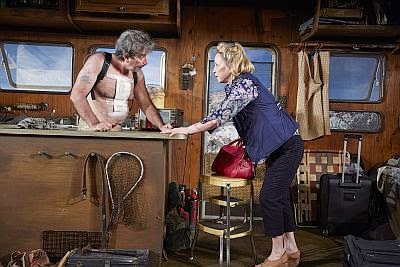 
Coming away from watching “,” a play by Sharr White that just opened at TheaterWorks, I was reminded of what is often said about Chinese food – you enjoy the meal but feel hungry an hour later. On the trip home, as I mentally digested what I had seen, questions started to bubble to the surface: questions about motivation, questions about dramatic structure, questions about resolution. In the hour-long drive I came to realize that the play I had enjoyed watching was, on reflection, not at all what it had seemed to be at the time of consumption and that I was left with a certain empty feeling.

Annapurna refers to the peak in the Himalayas in north-central . It is also the title of an epic poem that Ulysses (Vasili Bogazianos) has been writing over the past decade or so. Ulysses, a once robust college professor and cowboy poet, has fallen on hard times: he lives in a ramshackle trailer in Colorado that has the look and feel of a dumpster, is a reformed alcoholic attached to an oxygen tank because of severe emphysema (he once managed to smoke five packs of cigarettes in a day) and had been diagnosed with terminal cancer. He is also bereft of family, for several decades ago he woke one morning after a night of binging to find that his wife Emma (Debra Jo Rupp) had, along with their 5-year-old son, left him, leaving no note behind. That abrupt departure was, or so he claims, the catalyst for his slow yet inexorable descent into the current trash-bin life he is living. However, revelations and redemption of a sort are waiting in the wings.

White’s point of attack wastes no time with back-story – that is filled in throughout the course of the play in a rather repetitive fashion – for the play’s first scene, which lasts all of 30 seconds, has Emma, out of the blue and suitcase in hand, barging into Ulysses’ trailer as he, dressed only in a terrycloth apron, is cooking sausages that have gone bad. He responds to her arrival by repeating a three-word sentence that ends with an expletive…and then there’s a blackout. When the lights come up again the two are in the same position and Ulysses once again asked his three-word question.

Why the blackout? What purpose does it serve? A question, perhaps, for the playwright or director Robb Ruggiero to answer, but, on reflection, it seems manipulative, a visual effect, an electronic moment that makes the audience feel that something has happened (perhaps of great dramatic weight) when it really hasn’t. As such, it serves as an unintended metaphor for much that will occur in the play. 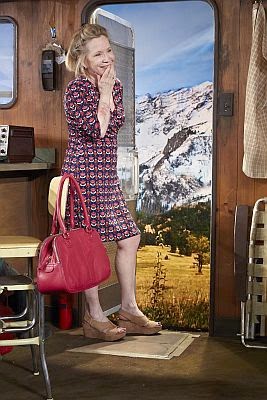 Ulysses is understandably confused about Emma’s sudden appearance, but Emma, who bears red marks on her arms and around her neck, offers no explanation. Ulysses will have to coax the answers from her – this is the device White has chosen to deliver the back story and also to bring the play to its resolution. It works the first or second time, but he keeps on going back to it – Ulysses asks a question, Emma opts not to respond, then does so – that it becomes both obvious and a bit boring. So, too, are the constant references to Ulysses’ slovenliness, a mode of existence that is evident even before the start of the play, for all the audience has to do is take in Evan Adamson’s impressively detailed set design of the interior of the trailer to understand that here lives a slob. This running joke has Emma moving about the trailer uncovering disturbing details of Ulysses’ disdain for cleanliness (ants, rotting meat, a filthy countertop) – she does the reveal, Ulysses responds, and Emma reacts. It gets laughs the first few times but it soon becomes old.

The play ends with an inquisition of sorts as the tables are now turned – Emma is asking the questions, demanding that Ulysses remember what happened the night before she disappeared with their son, and he cannot respond, ostensibly because the evening is all an alcoholic blur. This leads to a “dark night of the soul” moment that is supposed to be cathartic for the couple as well as for the audience. It remains to be seen if that is so. The play’s denouement has Emma giving Ulysses a haircut (a somewhat heavy-handed piece of symbolism) as he recites the first stanza of his epic poem for her. As he recites, the couple is slowly bathed in a warm glow by lighting designer John Lasiter, a glow that fades to black as Emma gazes adoringly at her cowboy poet. 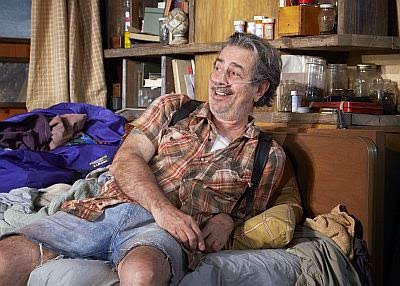 The fact that all of this works, that the problems inherent in the play don’t become obvious until well after departing the theater, has to do with the skill and talent of the two actors. Although Bogazianos begins as something of a one-trick pony – gruff and growling regardless of the lines he is speaking – he soon begins to provide his character with emotional layers. However, it is Rupp who propels the show, captures the audience’s attention and weaves a web of theatrical magic that for the entire 90 minutes successfully diverts any rational consideration of the play’s limitations. The theater’s relative intimacy allows Rupp to use nuanced facial expressions and subtle body language to convey a broad range of emotions that support and enhance the delivery of her lines.

And so, what about the questions, especially those dealing with motivation and resolution? To pose them, much less attempt to answer them, would be to act the role of the spoiler. Suffice it to say that they deal with the scars left by alcoholism and family abuse. Given what has happened to these two characters in the past, would they – especially Emma -- actually find themselves in this situation at this time in their lives? Can some things actually be forgiven and forgotten? White suggests that, with the recitation of a little bit of allusive and highly self-referential poetry, plus a bit of ‘fessing up, they can. However, ultimately, that’s up to the audience to decide. What’s not open to debate is that Rupp is one hell of an actress.