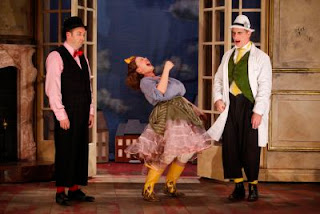 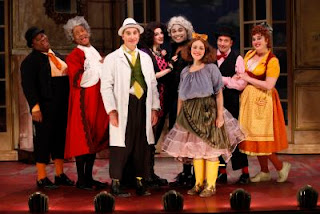 The cast of "A Doctor in Spite of Himself" Photo by Carol Rosegg
To the play. The Old Man wheels out an out-house which is quickly transformed into a puppet stage, which Bayes uses for a sight gag that initially is amusing but, with repetition, loses its humor. Sganarelle quickly appears along with his wife, Martine (Justine Williams), whose bouncing dugs elicited shrieks from The Laffer. Martine, harridan-extraordinaire, soon begins railing against her husband, who gives as good as he gets. He is quickly sent off to chop wood (much is made throughout the evening of how he handles his wood), leaving Martine to devise her revenge. She doesn’t have to think long, for Valere (Jacob Ming Trent) and Lucas (Liam Craig) quickly appear on the scene. This Laurel-and-Hardy duo are in search of a doctor to cure the sudden selective mutism of Lucinde (Renata Friedman), daughter of their master, Geronte (Allen Gilmore). As Martine’s has suggested, the two beat Sganarelle with sticks until he agrees that he is, in fact, a renowned doctor, and off to Geronte’s mansion they go.
To allow for a set change there is a scene-in-one that has most of the cast dressed as masked Renaissance doctors wearing blood-stained smocks and white cones on their heads and doing a song and dance routine, accompanied by Greg Powers and Robertson Witmer, that satirizes the medical profession, Unfortunately, what with The Laffer roaring behind me I missed many of the lyrics – I must assume they were very funny.
At the mansion, Jacqueline (Julie Briskman) fills in Geronte on his daughter’s current plight, her sudden silence brought on by her father refusing to allow her to marry the penniless Leandre. Sganarelle et al soon appear on the scene and what follows is a series of skits in which much is made of Jacqueline’s breasts and Geronte’s belly. All is brought to resolution when Leandre, disguised as Sganarelle’s assistant, agrees to disguise himself as himself so that Lucinde will marry him and will be shaken out of her mutism when she finds she has married the wrong man who, of course, is the right man. Get it? Got it. Good!
There is, of course, a lot of physical comedy – outright slapstick – which is performed with a great deal of panache by the entire cast, and Bayes and Epp have updated the script to allow for quite a few theatrical and topical allusions (including the “Occupy” movement). There are many moments to smile at, especially if you are at all familiar with the stage stereotypes and acting techniques associated with commedia dell’arte, but somehow, save for the magical Briskman as Jacqueline (she does an extended scene in which she is a Blanche DuBois clone, a cockney maid, and a foul-mouthed version of Ethel Merman), the performances seem a bit forced – everyone is working just a bit too hard at being funny to be funny. Then again, maybe everyone was very funny but I was so busy being bedeviled by The Laffer that I missed it all.
“A Doctor in Spite of Himself” runs through Dec. 17. For tickets or more information call 203-432-1234 or go to www.yalerep.org
Posted by Geary Danihy at 5:31 PM