The case is afoot...

Long before Basil Rathbone and Nigel Bruce gave us Sherlock Holmes on the silver screen, the famous detective was brought to life by Hartford's William Gillette (he of Gillette Castle).

The story of how Gillette brought Arthur Conan Doyle's character to the stage is being presented by the East Haddam Stage Comapny in performances at the Mark Twain House Auditorium on Dec. 8 and 9 at 7:30 p.m. 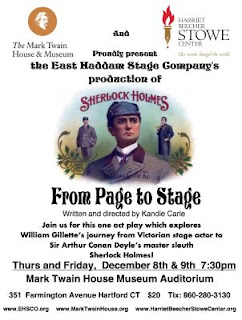 The production will cover how Gillette, a fine Victorian actor, went from farce to historical drama to, finally, the defining role of his lifetime, along the way meeting the sleuth's creator.

Don't Look Now --But Christmas is On the Way (What a bummer!)

The turkey hasn't come out of the oven yet, but we're already getting info on various holiday productions.

Bummed out by the Holidays? You might want to try the Theater Artist Workshop's "Cheer Up! A Holiday Revue," which will be presented Friday through Sunday, Dec. 2 - 4, at the workshop at 5 Gregory Blvd. in Norwalk.

The revue is, so the relase would have it, "a light-hearted survey of the often stressful final months of the year." There will be "merry monologues," seasonal songs suitable for sing-along, and holiday sketches that will deal with Thanksgiving mishaps and holiday misanthropy -- a mixture of grumble and glee!

Then, of course, there's Scrooge --

Once again, the Hartford Stage is presenting its version of Charles Dickens' "A Christmas Carol," with Bill Raymond returning for his twelfth shot at the title role. Dickens wrote the novella as a ghost story, and the Hartford Stage pays tribute to the "spirit' in which the classic tale was written by giving you more ghosts than you can shake a stick at. Featuring local children and a host of professional actors, this production has become a family tradition, and rightly so, for it is vivid theater with something for everyone. There are a host of special events scheduled to dovetail with the production, including "Market Days," with gift items featured in the lobby, "Santa Saturdays," "Behind the Magic" Sunday (Dec. 18) and a "Christmas Carol Character Brunch" (Dec. 11). The production runs through Dec. 30.

Next Season at Goodspeed

Behind the Scenes at Long Wharf

Long Wharf Theater will again be running its SPARK! program, which allows audience members into the creative process that brings a play to the stage. This year, the program will focus on "Macbeth 1969" -- participants will be invited to the play's first rehearsal, or they can participate in a discussion on interpreting Shakespearean text. Additionally, audience members can watch a technical rehearsal of the play (an often grueling process for the actors) or meet with director Eric Ting for a discussion on how a classic play is adapted for a modern staging.

This is a unique opportunity for theater-goers to get a glimpse of what goes on behind the lights as a play is ever so slowly brought to life. For more information call 203-787-4282 or go to http://www.longwharf.org/

For reviews of current productions, plus more theater news and casting calls, go to http://www.ctcritics.org/

For movie reviews, go to http://susangranger.com/
Posted by Geary Danihy at 4:33 PM