Voices From the Past
In a recent review of Yale Rep’s , theater critic Rosalind Friedman bemoaned the fact that many of the plays she has recently seen have “been loaded with alcoholism, drug addiction, self-destructive behavior and suicide.” The result, for her, is that the “past few weeks in the theater have been depressing.” Well, there’s an antidote, and it can be found at ’s Square One Theatre, which is presenting A. R. Gurney’s Ancestral Voices through Saturday, Nov. 19.
Under the steady direction of Square One’s artistic director, Tom Holehan, this “play” (more on the italics later) is an appropriate antidote for those currently fighting off suicidal tendencies brought on by all of the angst-driven productions currently bedeviling theater audiences. That’s because Ancestral Voices has the feel of an old, comfortable robe, one that’s perhaps showing a bit of age but, if you allow yourself to become wrapped up in it, soothes and satisfies. 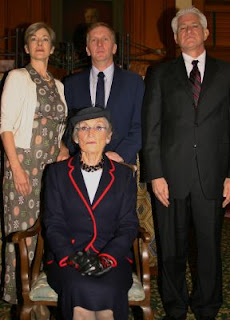 Staged with minimal scenery (basically five white columns), with the actors seated in front of music stands throughout the entire evening, this is one of Gurney’s hybrids (much like his Love Letters) in which the audience is called upon to “create” both the time and place of the action and the actors are called upon to create emotional moments in time while not being allowed to move from their chairs or, for the most part, interact with each other, since the dialogue is directed at the audience rather than at the assembled characters.
If it sounds boring, it’s not, although the show does take a little bit longer than it should to build up some steam, and that may well be because the introduction of the characters, beginning with Eddie (at the opening night performance played by Steve Scarpa) is, oddly enough, a bit rushed. The play, which embraces three generations of a family living in Buffalo (with the rise and fall of the city mirrored by the dissolution of the family), is something of a dreamscape, with time treated as malleable. Given that, the initial entrances are a bit too abrupt and establishing lines are lost (over the evening, other lines are stepped on and some sound effects are off a beat or two – but this was opening night).
As Eddie explains in the opening moments, the “play” started out as something else – a novel (which Gurney actually wrote), and it could have become a film, but…it is what it is, more than a staged reading, less than a fully staged play, a radio drama without the radio, a collective theater-of-the-mind piece. Labels aside, what we have here is a generational saga that opens with Grandmother (Davina Porter) having ditched Grandfather (Pat Leo) for the charms of “Uncle” Roger (also played by Leo) – nothing shocking here, except this is pre-World War II Buffalo and the families are entrenched in the city’s class-conscious WASP hierarchy. Thus, Grams’ kicking over the traces is, well, scandalous, and places her family, daughter Jane (Janet Rathert) and son-in-law Harvey (David Victor), in a bit of a bind (Who to side with? How to keep up appearances?), with young Eddie trying to figure it all out, mostly by eavesdropping and asking inappropriate (out of the mouths of babes) questions.
There’s no high drama here, but there is movement as Eddie moves backwards and forwards in time, setting scenes and relating incidents (verbal snapshots), some minor, some pivotal, that in sum make up a family history.
Especially moving is the set-piece that finds Gramps taking Eddie on a trip up to a hunting cabin in the . In dialogue that echoes E. B. White’s famous essay, “To the Lake,” Gramps reminisces and passes on lore, learning and a love of the land to his grandson, who in response writes a school essay about Gramps that evokes a certain amount of jealousy in grandmother.
The play’s primary tension comes from Jane’s attempts to keep her parents from confronting each other after the separation and Grandmother’s marriage to “Uncle” Roger, and Eddie’s desire to see his grandparents reunited. Grim news from Europe darkens the edges of family life, and then the Japanese attack and the extended family’s young men prepare to go off to war, but first there is to be a wedding to which Gramp and Gram have been invited. Jane creates an involved timetable that will insure the two will not meet, but that is subverted by Eddie, and in a wonderful series of “what might have happened” scenarios, the audience gets to have its emotional cake and eat it too.
Although the five actors all give admirable performances, it is Porter and Scarpa who provide the greatest range of emotions. As Eddie, Scarpa “grows” over the course of the evening from a somewhat nosy, obnoxious little boy to a mature man with a family of his own, and the ever-reliable Porter animates both Grandmother and “Aunt” Fanny (a brief love interest for Gramps orchestrated by Jane) such that in retrospect you would swear she moved about the stage, especially during her “standing” speech (she doesn’t actually stand) at a family Christmas dinner.
If you are seeking release from the current spate of post-modern agony being offered on stages, an evening spent with Gurney’s ancestors should do the trick. They will speak directly to you and by the end of the evening you will feel like one of the family.
“Ancestral Voices” runs through Nov. 19. For tickets or more information call 203-375-8778 or go to www.squareonetheatre.com
_____________________________________________________________________
On Tuesday, Nov. 15, Fairfield University's Quick Center for the Performing Arts will present John Malkovich in The Infernal Comedy: Confessions of a Serial Killer for one performance at 8 p.m. 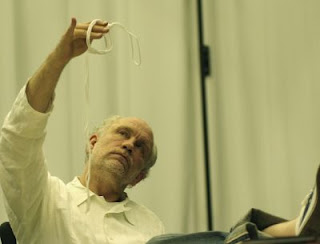 John Malkovich. Photo by Nathalie Bauer
The show features, along with Malkovich, two opera singers and an orchestra, and deals with real-life serial killer Jack Unterweger, an Austrian who preyed on prostitutes in several countries, eventually hanging himself in 1994 (using shoelaces and a cord from the waistband of a jogging suit) after being sentenced to life in prison.
Currently, the performance is SOLD OUT -- to be put on a wait list call 203-254-4010.
Posted by Geary Danihy at 10:58 AM