A Life In Song 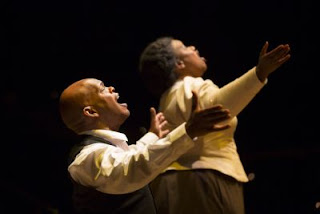 How to pigeonhole “Breath & Imagination,” a play by Daniel Beaty that is receiving its world premiere at Hartford Stage? Yes, it is a play, of sorts – there is dramatic tension and conflict -- but it can also qualify as a musical, since there are over 20 musical numbers in the two-act production. However, many do not directly relate to or move the action forward, so it also has the feel of a musical revue. As a hybrid, it often captivates as, under Darko Tresnjak’s direction, it tells the story of Roland Hayes, the first world-renowned African-American classical vocalist – his rise from poverty, his battles with racism and his search for the true nature of his art, but then again, it also pontificates and, at times, seems underdeveloped, leaving one with more questions than answers. You come away having learned a lot about who Hayes was, but not really understanding the man’s soul. Perhaps that is too much to ask.

As Hayes, Jubilant Sykes, with his rich baritone voice, is called upon to portray the future international star as a child, a teenager, a struggling young adult, a conflicted artist and a man finally embracing his heritage and weaving it into his art. It’s a commanding performance, given that in both dialogue and song he must convey the growth and maturation of his character. There aren’t any false notes here, although I would question a repeated facial expression at the end of many of his numbers – at first it seemed to evoke a dawning awareness of his talent, but it is seen over and over again – eyes wide, almost as if in amazement, a somewhat lopsided grin; a look that seems to be asking for, begging for, approval. I’m not sure what it is supposed to convey.

Kecia Lewis plays against Sykes as Hayes’ mother, Angel Mo’. The daughter of slaves, Angel Mo’ is a strong-willed woman who holds firm religious beliefs that she passes on to her son, urging him to become a preacher. Some of the exchanges between mother and son, as written by Beaty, border on the cliché, and there are moments when you can almost see a neon sign flashing “Message! Message!” above the actors’ heads, but the interaction between Lewis and Sykes is strong enough that they overcome whatever weaknesses there are in the script and end up giving the audience some truly moving and humorous moments.

The play has Hayes interacting with, learning from, being supported by and/or humiliated by a host of characters, all played by the very versatile Tom Frey, who also accompanies Sykes and Lewis on the piano. Frey is able to realize most of the characters he is called upon to portray, save for a rather Monty Pythonesque “Miss Robinson” and a somewhat simpering King George V. He is most effective as a racist police officer, as Pa, Hayes’ father, Mr. Calhoun, a teacher who takes young Hayes under his wing, and, of course, as the accompanist.

Despite some repetitive blocking that has Sykes and Lewis walking around the limits of the stage perhaps once too often (always counterclockwise), Tresnjak keeps the action moving and, along with York Kennedy’s outstanding lighting design and some very effective sound design by Jane Shaw, deftly handles shifts in time and place as the story moves backwards and forwards. Perhaps the most riveting moments are those when Hayes is suddenly back in that police station, asking about his wife and child, being threatened – and eventually beaten -- by a baton-wielding cop. The scene is used as punctuation – when things are going well for Hayes, it crashes in like a visual dark night of the soul, constantly reminding the audience of the tightrope Hayes walked as he struggled to become a world-class artist while, at home, he and his family were always subject to the vicious whims of those who believed they held sway merely due to the color of their – and Hayes’ -- skin.

The music is a mix of classical (Faure and Schumann), traditional spirituals and new songs written by Beaty, and it is here that, oddly enough, the play seems to miss some major opportunities, especially with the integration of the African-American spirituals into Hayes’ repertoire. Time after time, the connection between what we are learning about Hayes’ life and what Sykes is singing is dangled out there, almost realized, waiting for a clearer frame. It almost seems as if the play is one character short, missing someone who might have provided a larger, more inclusive perspective on the life, times and art  of Roland Hayes.

“Breath & Imagination” intrigues, entices and entertains. What it doesn’t do is deliver the emotional punch that is promised (or perhaps desired) but never realized. That it is a mere half-step away from doing so means that you come away wanting more but not exactly sure what that “more” entails.