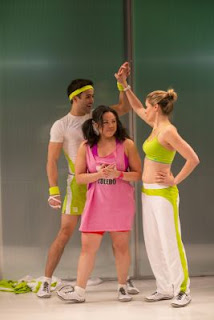 Let’s talk about metaphors. Essentially, a metaphor says this is this but it’s also that, it’s two mints in one. Yes, that’s a tree, but it also represents a family, and as the tree rots so does the family. For metaphors to work, there has to be some underlying connection, some visual or sensory link – ah, a tree grows, spreads and dies, like a family, because the roots are infected. Got it. Think of Willy Loman, in “Death of a Salesman,” trying to plant a garden, new growth, in soil that will no longer support life. Got it. It works. Why this discussion? Well, when a metaphor doesn’t work, when there’s no association, no underlying connection, it leaves you scratching your head, asking what does a rutabaga have to do with insider trading, or space aliens have to do with weight loss? Hence the head scratching as you leave Long Wharf’s Stage Two after sitting through the premiere of “January Joiner,” a play by Laura Jacqmin that intrigues, entrances and...leaves one asking…what the hell?

This is a slick, stylized deftly staged and directed production of a play that should have been vetted, and by that I mean someone should have asked Jacqmin: “What are you really trying to say?” We are in , at an up-scale weight-loss spa, where three people have come to lose weight or, in the parlance of the play, change their images. This will be accomplished through a rigorous regimen of exercise and the limited consumption of things most people don’t, on a regular basis, find edible, overseen by two slim trainers who have their own body issues.

Stage Two’s foyer is plastered with posters dealing with obesity and food obsession, and the program is littered with detailed information about body weight and eating disorders, but that really isn’t what the play is about. It’s about relationships, and when it deals with these relationships (sisters growing up “fat,” trainers obsessed with their bodies, physical attraction measured by weight and size), the production is intriguing and, at times, trenchant. Obesity and sizeism (is that a word?) are important, multidimensional topics on their own, but Jacqmin has chosen to add a layer of surrealism that simply confounds. We have a talking and vengeful vending machine, which stands, I imagine, for the advertising and marketing efforts of companies that wish to sell “food” as a release and cure for angst and anxiety. Understood. But then there are creatures who appear and wreak havoc – and who are they? It’s not clear. We tumble into a world that takes us far, far away from topic Jacqmin has chosen to deal with.

The program guide offers a quote from Thomas Sipos’s “Horror Film Aesthetics” that seeks to justify what goes on in this production, but horror films must, if nothing else, have an inherent logic, and “January Joiner” doesn’t. This is unfortunate, since the cast members are, by and large, stellar, and they work to create moments of magic – this is especially true of Terry (Ashlie Atkinson) and Myrtle (Meredith Holzman), two sisters, who share moments of intimacy and antagonism, and the two trainers, April (Tonya Glanz) and Brian (Anthony Bowden)), who deftly capture characters who are entranced by their body images and all that these images imply.

Director Eric Ting, who seems to get the nod when a Long Wharf plays is a bit off the beaten track, keeps things moving, and set designer Narelle Sissons and lighting designer Stephen Strawbridge, support the overall sense of danger inherent in focusing on body image above all else, but this is a play that stumbles over its own images, graphic as they may be. The first act ends with a “What just happened?” moment. The second act wanders into never-never land to offer an explanation of sorts, in the process losing sight of the basic tension, which is how does society influence how we view our bodies?

There’s a lot in “January Joiner” to chew on. Just be careful that you don’t try to bite down on something that’s a bit too hard to swallow.