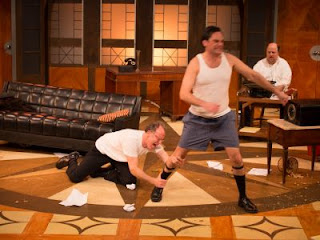 What do bananas and peanuts have to do with “Gone With the Wind?” Well, if you buy into Ron Hutchinson’s “Moonlight and Magnolias,” which recently opened at Playhouse on Park in , without the fruit and the legumes the epic story of Scarlett and Rhett might never have made it to the silver screen.

It’s 1939, and David O Selznick (Kevin Elden) has just halted production on “Gone With the Wind” because the script just isn’t working and the director, George Cukor, is not working fast enough. Rumors start to fly and Louis B. Mayer, the autocratic head of MGM – and Selznick’s father-in-law – is on the phone constantly. The project is as high-profile as it can be and if Selznick fails he will be just another one of the many mighty who have fallen. To save the project, Selznick taps Victor Fleming (Bill Mootos), who is currently directing “The Wizard of Oz,” to take on the directorial task, and Ben Hecht (Allan Greenberg) to rewrite the script – in five days. That’s the set-up. What follows is an entertaining blend of slap-stick, farce and message-driven drama that, under the wise, creative hand of director Russell Garrett, speeds along to an engaging final, visually satisfying (and humorous) coup de theatre.

The fact that Fleming will direct and Hecht will do the rewrite is not dramatic in itself, so Hutchinson has envisioned what went down during those days when the film was saved, first and foremost by having Hecht and Fleming come to Selznick’s office and being locked in, at Selznick’s command, by Miss Poppenghul (Denise Walker), Selznick’s secretary. The three men will stay in the room – sustained by only peanuts and bananas (Selznick believes the fruit is “brain food”) until the task of rewriting the script has been accomplished. There’s only one problem: Hecht has never read the book, and as he is filled in on the basic plot he believes the film will never be made. Selznick doesn’t have time for Hecht to read through the Margaret Mitchell’s tome, so he and Fleming set out to act out the story. Thus, the two will play, at one time or another, all the major characters. The result runs the gamut from the merely humorous to the outrageously hilarious.

Once Hecht agrees to write the script, director Garrett gives us an inspired four or five minutes of mime (which will be somewhat indecipherable to anyone who has not read the book or seen the film), in which Elden and Mootos play out many of the film’s opening scenes to the strains of Leroy Anderson’s “Typewriter,” an inspired choice of musical accompaniment, the actor’s moving to the syncopated rhythm of the music as the “clacking” of the typewriter captures Hecht’s frantic efforts to capture all that is going down. Garrett will return to this music as the second act opens, although this time it is slowed down until it becomes a dirge, audibly telegraphing the mood in the office as the lights come up.

Garrett is blessed with a fine cast, each member blessed with a sharp sense of comic timing. Elden’s Selznick runs the gamut from elation to despair as he prances, commands, begs and pleads, and, at times, goes slightly haywire. Playing off him, Greenberg’s Hecht is satiric and snide, creating a character who is torn between plying his trade (which he is very good at) and trying to live up to a certain set of ideals. It is here that Greenberg stumbles a bit, although it is perhaps not his fault, for his character is charged with being the conscience of the play – the one who speaks out against racism in all of its forms. Thus, he is tasked with delivering some soliloquies that scream “Message.” In these moments his heart just doesn’t seem to be in it, as if the actor knows that he’s the mouthpiece for the playwright and he can’t wait to get back to being the sharp-shooting reporter who takes no verbal prisoners.

Mootos, as Fleming, is given many of the best lines -- “Frankly, Scarlett, I don’t give a shit!” -- and Garrett has given him some of the play’s best moments, chief among them the “birthing” scene and the banana scene early in act two in which Fleming, now reduced to wearing an undershirt, boxer shorts and black socks held up by garters, discovers an uneaten banana under a couch. He then tries to open the banana – the effort produces some delightful visual humor culminating in his attempt to use his head as a vise as a much bedraggled Miss Poppenghul stares in wonder and confusion.

’s much put upon Poppenghul is dutifully subservient – and confused with the goings-on in the office. She eventually has a lovely break-down scene in which she cannot distinguish between past, present or the task at hand…is given the day off…and returns to lift a banana high in the air (don’t ask – just go and see).

This is a play in which the set, created by Erik Diaz, is essentially destroyed in every performance as the actors tumble and fight, throw bananas and peanuts at each other, and generally have a hell of a good time. So does the audience, although I suspect that a lot of the visual and verbal references will be lost on those who have never known a world without a computer. A line like “Stalin…he’s too nice” will mean nothing to those who think the Comintern refers to a dance.

This is a sprightly production of a play that, although lumbered a bit by too many messages, rises above being meaningful to be delightfully silly, and will engage anyone who grew up in an era when the line, “Frankly, my dear, I don’t give a damn” was considered risqué.