"Ancestral Voices" Tugs at the Heartstrings 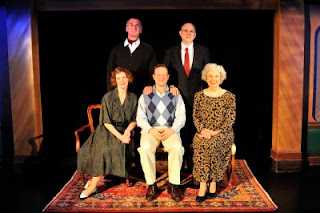 There was a time called the 1930s and there was a place called . The 30s are now chronicled in history books, and Buffalo wears a different face and speaks a different language than it did six-plus decades ago, but you can return to that time and that place at MTC MainStage in Westport to view a very sound production of A. R. Gurney’s “Ancestral Voices,” a play (if you will – some argue about its genre) about change and what is lost and gained in the inevitable process.

Gurney wrote the play to be read on-book (i.e., with the actors holding the scripts in their hands). Many companies have chosen to stage the play differently, but director Kevin Connors has chosen to do it the old fashioned way…and it works. The actors carry their scripts in black binders, often resting them on two metal music stands. When not standing, the actors sit in chairs aligned in a row on the stage. Sound boring? It’s not. In fact, what this type of staging reveals is the power of the word and the skill that actors bring to their craft, for you soon forget the scripts in hand as you are taken back to a time and place when life was, if not simpler, at least bound by rules that, if abided by, provided security, and if broken, placed the sinners under the unflinching eyes of society’s angry demi-gods.

The play, which spans three decades, is narrated by Eddie (Michael McGurk) and opens with a family on a car ride to visit Grandma, but there is tension, for, as Harvey (John Flaherty), the father, drives, listens and gently chastises his children, Jane, the mother (Marty Bongfeldt), must explain to her three bickering children riding in the back seat – Eddie being the middle child -- that Grandma Madeline (Jo Anne Parady) has left Grandpa Ed (John Little) for another man whom they must now call Uncle Roger (also played by Little), a long-standing family friend who is into horse riding (as is, now, Grandma). What follows are three lines of development: Jane’s attempt to attend to the needs of her divorced parents, Eddie’s relationship with his grandfather, and the growing tension over what will happen when Grandma and Grandpa finally meet again, all set against a running commentary on Buffalo’s hidebound caste system and the growing threat of world-wide conflict.

In one respect, the play speaks to anyone who has ever asked himself or herself: “Should I stay or should I leave?” The staying may mean security at the price of a stultifying sameness that leads to a death-in-life existence; the going may open up glorious possibilities or introduce problems undreamt of.

At the heart of the play are three set-pieces: the fishing trip that Grandpa Ed and Eddie go on; a family dinner wherein the price Grandma has paid for her ‘liberation’ is revealed; and the final confrontation between Grandma and Grandpa at a family wedding. Although the set consists of nothing more than the aforementioned chairs and music stands in front of a simple archway, all three of these set-pieces are fully realized by the actors…with the help of the audience, which must suspend it’s disbelief and ‘imagine’ the milieu in which the set-pieces occur. As such, as Gurney notes in the printed program, the “form itself has an archaic quality, invoking, in some way the old radio plays that disappeared after the war.”

Under Connor’s direction the actors work extremely well together as they move forward and back as if they are spirits from the past taking on physical form to tell their parts of the story, then slipping back into the shadows. Especially moving is the fishing trip set-piece in which Little wistfully comments on all that has passed from the world while McGurk, evoking child-like eagerness and hero-worship, takes it all in. Equally engrossing is the wedding scene. Here Gurney posits three possible scenarios, two of which involve Grandpa finally winning the day, with the third – what really happened – so touching because, though somewhat anti-climactic, rings so true.

This is a gentle tale about gentler times, though those who lived through them found them as fraught with angst, danger, anxiety and confusion as we do in our time, and that is why the play – call it what you will – works so well without all the usual theatrical trappings. It speaks to the human condition, which is eternal.

“Ancestral Voices” runs through Feb. 17. For tickets or more information call 203-454-3883 or go to www.musictheatreofct.com