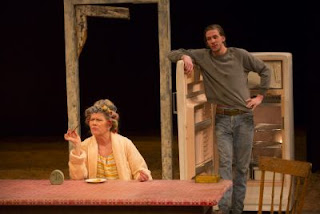 Acting wisdom says don’t do a scene with an adorable kid or a puppy. Well, to that you can add stay away from any scene with a lamb, especially a lamb that seems to have an uncanny sense of timing when it comes to emitting “Baaas.” However, the cast of Sam Shepard’s “Curse of the Starving Class,” which recently opened at Long Wharf Theatre under the direction of Gordon Edelstein, really doesn’t have a choice, so there they are, delivering their lines as the encaged lamb does its adorable bit and responds…often on cue…to what the actors are saying. Ah, but lambs, being what they are, or what they symbolize in literature (and religious texts), often meet with less than felicitous ends, and Shepard, who isn’t above milking a good metaphor for all it’s worth, starts by giving us a humorous look at a dysfunctional, hardscrabble family clinging to their California land by their fingernails, a look that, eventually, also meets a less than felicitous end as message trumps drama, symbolism runs riot, and we are left with an existential silence that seems something of a cop-out.

The family in question consists of Ella, the mother (Judith Ivey), a lady who dreams of touring Europe, the alcoholic father, Weston (Kevin Tighe), who dreams of making a big score, when he’s not simply dreaming of oblivion, their son, Wesley (Peter Albrink), who has limited dreams, constrained by the dominance of his parents, and daughter Emma (Elvy Yost), a free spirit who dreams in scenarios – she is a car mechanic, a novelist, an ex-pat living in Mexico. They all live on land that may have value, if it is sold to developers, but currently yields nothing more than angst, in a house with a perpetually empty refrigerator (a much-milked trope) and a broken front door, compliments of Weston’s last visit to the family manse, a visit that required him to knock down and destroy the door to gain entrance. All of the family members, save Wesley, want out, and the means of departure, at least for Mom and Dad, is to sell the land. The problem is, unbeknownst to each other, they are working at cross purposes…and have been gulled by the same con man, Taylor (John Procaccino).

The first act of the play has a skewed “All in the Family” feel to it, for the family’s dysfunctionality goes beyond the norm, what with Wesley urinating on his sister’s 4-H posters as Ella watches dispassionately, the maggot-ridden lamb housed in the kitchen, and Weston, upon his return, bedding down on the kitchen table. There are also a lot of dreams and desires expressed (tenuously connected to an ill-defined American Dream), as well as a discussion of the family curse – the males seem to have nitro-glycerin running in their veins. It’s obvious that this family is held together by spit and bailing wire and it won’t take much to rip it apart.

The ripping apart occurs in the second act, and it is here that the whole shooting match spins out of control as metaphor clashes with metaphor, what with a testicle-eating eagle, an attempted cleansing of the soul and rebirth through a bath-baptism that goes awry, a gorging on the products we buy to soothe our angst-filled lives, a sins-of-the-father scenario that’s just a bit too literal, and multiple sacrifices that do not placate a disaffected God. The characters, if believable in the first act, become pawns that Shepard uses to deliver his muddled, multiple messages, all with a false gravitas that insists there’s more going on here than meets the eye. There isn’t. It’s po-boy Grand-Guignol, with the most devastating moment (it deals with an explosion of a car) lost in the shuffle, for the loss of one of the main characters in said explosion has no impact on the other characters…there’s nary a comment made. I guess this is supposed to be a bit of dramatic irony, but it is mystifying.

Ivey, as is to be expected, turns in a stellar performance, as does Tighe, creating a husband and wife team straight out of Greek tragedy, both driven by their tragic flaws, and Yost has some fine moments, chief among them a temper tantrum early in the first act and a soliloquy that captures her character’s dreams of escape and revenge. Albrink, however, seems to be stuck at a single emotional level so that the zombie-like character he becomes at the end of the play seems not much of a change from the earlier Wesley.

All in all, this graphic take on the American Dream gone rancid is mostly surface sturm und drang, leaving at least one member of the audience completely unmoved by the harrowing events that occur in the second act. There can be no catharsis if you simply don’t care about the characters (although I did feel a bit of emotion for the lamb).