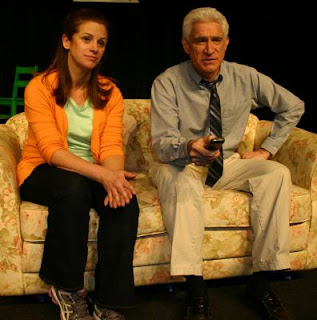 With theater, you just never know. You go to a name theater to see a first-rate cast in a production by a big-name playwright and you leave unmoved, if even that, and then you settle in at a local playhouse to see a play you’ve never heard of with a cast that has never trod the Broadway boards and are basically blown away. Go figure. You just never know where theatrical lightening will strike, but it has certainly struck at ’s Square One Theatre, where Lisa Loomer’s “Distracted” has recently opened. It’s not a perfect production (is there such a thing?), but it is eminently satisfying and entertaining.

Smartly directed by Square One’s artistic director, Tom Holehan, this dramatic analysis of our distracted society in which we spend more time on the Internet, on our smart phones, surfing the Internet, downloading, uploading, texting and tweeting than simply touching, feeling and listening to each other, is humorous, bittersweet and biting.

What we have here is a modern family beset by modern problems, among them an apparently hyperactive (or just very creative) male child who is causing problems at home and at school, problems that may be just those that boys cause because they are boys or by the dark shadow of Attention Deficit Disorder, that vaguely defined mental disorder that might be real or just a psychological term for boy-hood, a term that has been re- and re-defined by the “professionals” based on the drugs that are available to counteract exuberance, based on articles published in respected medical journals, based on research funded by the marketers of the drugs that make millions of dollars when said professionals prescribe them. Conflict of interest? Of course not. But, if you are of a certain age, ask yourself (as one of the characters in the play asks), how did we (i.e., those born before ADD was defined) get through adolescence and puberty without drugs?

The boy’s teacher is complaining … something has to be done. He’s disruptive, can’t sit in his seat for more than five minutes, is moody, then aggressive. Mom? Dad? Do something!

Mom (the marvelous Lillian Garcia) is an interior designer who has opted out of her high-end job to stay at home to be with her son, Jesse (Michael Mulligan), while Dad (Pat Leo) does his nine-to-five thing, then comes home to relax by flicking on the TV to watch things explode. Jesse (who is heard throughout the play but seen only in the final moments) doesn’t want to get into his pajamas, sasses his parents and uses the F-word with shocking frequency. Dad says he’s just a boy; Mom is not so sure, and seeks guidance, which takes her to a series of psychologists, doctors and New Age gurus, all of whom wish to rice and dice the child, driven by their specific disciplines, in order to prescribe a CURE -- for childhood, be it a restricted diet, reward-denial-based therapy or drugs -- excuse me, medication -- and here we come to Loomer’s main thesis: why are we drugging – or medicating -- our eight- and nine-year-old children? It’s a compelling question. Given a society that rewards conformity and obedience, what is to be done with a child (or millions of children) who do not wish to conform? Loomer suggests that our current solution is a bit Orwellian. 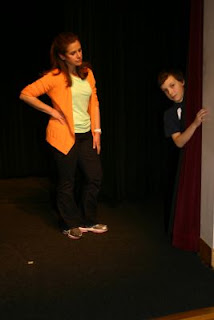 Holehan has wisely grasped the nature of Loomer’s message and script and in his direction has emphasized the non-stop, empty-message-driven nature of the society in which we live (or merely exist) by having scenes press against each other as if there isn’t enough time for actors to get on or off the stage, or, in some cases, to shift from one character to another. The pace is frenetic, with scenes truncated because, well, there’s another scene that needs to be dealt with, to be seen, before we go to another scene…but there’s another scene waiting, so hurry up and get through this scene…all while Garcia, as Mama, attempts to deal with the pressure of a balky child, a distracted and disaffected husband, pill-popping neighbors dealing with their own half-acres of psychological hell and professionals who are eager to prescribe rather than cure…or merely comfort.

This whirligig of scenes, emotions and needs requires actors to take on multiple roles, and Michelle Duncan, Betty McCready and James Leaf (who does several delightful yet frightening Jekyll-Hyde turns) are well up to the task, as is Alanna Delgado, who as Natalie, the next-door teenager who babysits and cuts herself, provides some chilling, emotionally riveting moments.

Problems? Not many. There are some lighting cues that still need to be worked out and there are times when the script is less drama and more research, but these are minor irritatants. In all, “Distracted” will keep you riveted…and make you think about what we are doing to the next generation. It will also make you remember the “wild” kids of your youth, the ones who seemed to be out of control but somehow made it through childhood to become functioning adults. In essence, “Distracted” asks us to consider whether we, as a society, have slowly become unable to deal with our obstreperous offspring in any other way than to squelch exuberance, creativity and experimentation with mind-altering drugs.

“Distracted” runs through March 16. For tickets or more information call 203-375-8778 or go to www.squareonetheatre.com
Posted by Geary Danihy at 5:22 PM