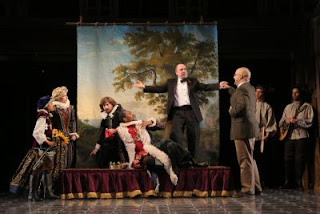 Paul Giamatti and the cast of "Hamlet." Photo by Joan Marcus.

I’ve seen all sorts of Hamlets. I’ve seen morose Hamlets and intellectual Hamlets, flighty Hamlets and swash-buckling Hamlets (well, only one of those), but I can’t say I’ve ever seen a bratty Hamlet before, but that’s essentially what we have in Yale Repertory Theatre’s current production of one of the Bard’s greatest tragedies, a production featuring Yale School of Drama graduate and film star Paul Giamatti.

A definition is wanted (if only to clarify). Brat: child; specifically, an ill-mannered, annoying child. In other words, we get a Hamlet more bad boy than brooding prince. And yet, it didn’t have to be this way, because there are moments, many moments, when Giamatti delivers an intense, even riveting, Prince of Denmark, and then, under the direction of the Theatre’s artistic director, James Bundy, Giamatti goes for the sight gag or delivers his lines with excessive drollery. The lines and the gags garner laughs, but at what expense?

Three moments, of many, stand out as examples of an idea gone awry. The first is at the end of the bedroom scene in which Hamlet has slain the pontificating Polonius (Gerry Bamman) and taken his mother to task for wedding her late husband’s brother. It’s a powerful, psycho-sexual scene, and Giamatti and Lisa Emery, as Queen Gertrude, create a marvelous tension, all to no avail, for in the final moment, as Hamlet is removing the body from the bed chamber he pauses, gives it a double-beat for effect, and then says “Good night, mother” in a spoiled-brat voice that says, “See what I’ve just done?” The audience laughs. With that, everything that had been accomplished in the scene collapses into farce. 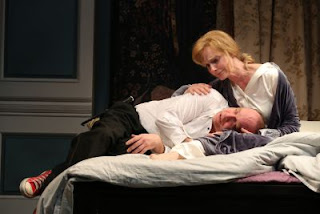 Another “wrong” moment. Hamlet is brought before King Claudius (Marc Kudisch) after Hamlet has killed Pelonious. The prince is handcuffed to a chair (a standard office chair on casters – and, yes, Giamatti will roll around the stage on it). The king and the prince stare at each other, and then Kudisch, who otherwise gives us a powerful picture of a man beset by his deeds, takes a deep breath and then says, “Now, Hamlet,” as if he is addressing a recalcitrant schoolboy. Giamatti mugs and the audience laughs. The moment generates the idea that Claudius is about to give Hamlet a good spanking for having had his hand caught in the cookie jar. Again – farce or drama – what do we have here?

The final moment? The sword fight between Hamlet and Laertes (Tommy Schrider). This is the resolution of all that has come before, the final reckoning, and yet (who is responsible for the stage business? Director? Star? Who knows?), the opportunity for a vaudeville sight gag can’t be passed up. On the second engagement between the two combatants, Hamlet manages a final “hit” with his rapier between Laertes’ legs. He wiggles the blade a bit for effect. Again, drama or farce? Audience laughter. Laughter? Where’s the tension, the sense that a great tragedy is about to occur? 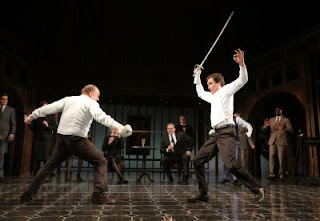 Giamatti is a fine actor, and he seems to understand the true nature of the character he is portraying, a character that is not above sarcasm and double-entendre when it serves his purpose, a character who is torn by the question of when (or even if) to take revenge for his father’s murder. But the mugging, the sight gags, the sly looks out at the audience, the red high-top sneakers he wears with his tuxedo, the knife he carries while proclaiming he bears a sword, all diminish what might have been a bravura performance. The problem, and it is a problem, is that the audience is too often asked to shift gears, or rather, to down-shift from tragedy to comedy (when comedy is not warranted), creating a “where are we?” feeling that argues against engagement.

This is all the more apparent because the rest of the cast plays it straight. Bamman’s Polonious is a delight…a wise fool who cannot help but add ten words when one will do. As already mentioned, Kudisch’s Claudius is, except for that one Peck’s bad boy moment, riveting, although as the ghost of the slain king he is hampered by having tendrils of smoke drifting off his shoulders as if someone has dropped a lit cigarette onto him – not a very impressive (actually distracting) special effect. Brooke Parks, as Ophelia, is a delight from her first scene to her last, which she carries off with aplomb, and Emery’s Gertrude is a complete characterization of a woman torn by doubt and nascent guilt, though the drunk scene – yes, she’s swilling from a bottle – is a bit much.

All in all, Yale Rep’s production is a study in contrasts, and the contrasts are more off-putting than intriguing. It’s not exactly clear what era the play is set in…late 19th Century? Mid-20th Century? Based on the garb and armament of Fortinbras’ soldiers, today? And as Giamatti slips back and forth between Hamlet as a tortured prince and Hamlet as a guest on a late-night talk show, the confusion is reinforced.

There’s a lot to like about the Rep’s current production, but there’s also a lot to question. To be this…or to be that…that is the question, a question that this production ultimately doesn’t answer because it tries to be too many things at the same time.