Life Could Be A Dream -- Ivoryton Playhouse -- Thru March 30 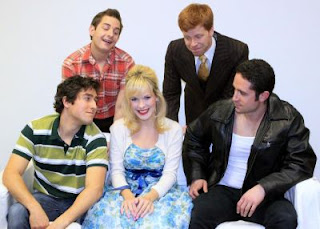 Are you a child of the 60s? If so, you may want to wend your way out to Ivoryton where “Life Could Be A Dream” recently opened at the Playhouse…or, if you don’t want to make the trip, find those old 45s packed away in boxes in the attic, get yourself a record player with a stack-spindle, and trip your way down Memory Lane listening to your past as you consider what Obamacare might mean for you.

“Dream” is essentially a revue, with song after song from the late 50s and early 60s, a time when the country was shaking off the placid doldrums of the post-war years and starting to question the materialistic largesse that did not quite mask the society’s racism and sexism. If rebellion was not yet in the air, there were rumblings, and while elders shook their heads at the “new” music filling the airways, a music that seemed somehow not fit for good white folks to listen to, what they were listening to was saccharine compared to what would follow. It is this saccharine that is revisited in “Life Could Be A Dream,” and as with all things sweet, you have to be careful not to overdose.

“Life…,” written and created by (what’s the difference?) Roger Bean, and directed by the Playhouse’s executive/artistic director, Jacqueline Hubbard, is a light, frothy tale of two…no three…no four young men who dream of stardom, if only they can win a local talent contest and secure a record contract. They rehearse in a basement, nagged by an unseen mother who wishes her son would get a job, and are visited by a pretty little miss who has a crush on one of the boys, a mechanic who happens to work in her father’s garage. The rehearsals allow for the introduction of many of the songs…the love interest opens up additional song possibilities…and when other songs need to be sung, well, logic just flies out the window. We’re not talking “Show Boat” here.

This is “A Chorus Line” writ small, “Grease” without the gumption and grit. There are moments when “Life…” attempts to be satiric, but the book really doesn’t lend itself to such efforts. There are other moments when it strives to capture an era, but the attempts are superficial. The basic problem is, there’s no bite to the piece, it floats on the surface by offering up hit songs from a by-gone era, hoping that that will be enough to please and entertain. The 45s fall, one after another, and you nod and say, oh yes, I remember that song, but context is essentially absent.

The cast, as directed by Hubbard, often seems to be leering at the audience more than acting. The style is reminiscent of how skits were played on the “Carol Burnette Show.” Aaron Catano’s Denny mugs and preens, a poor man’s Danny Zuko, Matt Densky’s Eugene takes “nerd” to a new dimension (and, admittedly, got a lot of laughs for his efforts), and Rob Rodems’ Wally suggestively prances (he’s a Christian choir boy, so what would you expect). The only two who play it relatively straight are Evan Siegel (think Lyle Waggoner) as Skip and Sheila Coyle as Lois (and the unseen mother).

Essentially, this is a show built on other people’s talent, the people who created songs such as “Get a Job,” “Mama Don’t Allow,” “Fool’s Fall in Love” and “I Only Have Eyes For You.” The songs are all it really has going for it (unless you’re into the “Burnette” thing -- a good deal of the audience was when I saw the production) and although many of them are delivered with verve and style that’s not enough to create a totally engaging hour and a half of theater.

Roger Bean obviously wrote something…there’s the dialogue…but he didn’t create much. Other people did, and he accessed the rights to their efforts. “Life Could Be A Dream” could have been so much more than it is. So we are left with songs, ably sung, and fill-in dialogue. Saccharine. You can trek out to Ivoryton, or dig up those old 45s…your choice.

“Life Could Be A Dream” runs through March 30. For tickets or more information call 860-767-7318 or go to www.ivorytonplayhouse.org