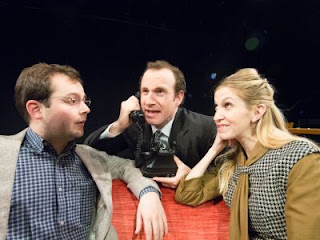 There are two spirits wandering around on stage up at Playhouse on Park in , where “Play it Again, Sam” is currently running. The first is in the script, and he is none other than Humphrey Bogart (Ted D’Agostino), the iconic tough-guy Hollywood star of the 30s and 40s, known for his roles in such classic films as “Casablanca,”  “The Maltese Falcon” and “The African Queen.” The other spirit is that of the play’s author, Woody Allen, the prolific actor, screenwriter and director who appeared in the play on Broadway in 1969 and subsequently in the 1972 film. Unlike the Bogey spirit, the Allen spirit is a bit intrusive, and at least one member of the audience found he had to keep holding mini-exorcisms to cleanse the spirit from his mind.

The play, a typical Allen exercise in self-abnegation and weltschmerz, finds film critic Allan Felix (Zane Johnson) at loose ends after his wife of two years, Nancy (Bethany Fitzgerald), leaves him because she wants to “live.” Rushing to hold Felix’s hand as he ping-pongs between false bravado and abject self-pity are his best friend, Dick (Dan Matisa) and his wife, Linda (Marnye Young). 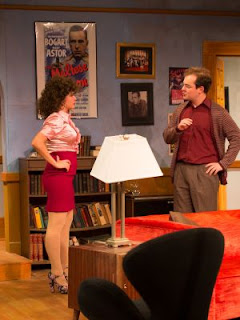 What follows is the couple’s attempts to get Felix back on the dating merry-go-round, with Bogey dropping by occasionally to evaluate Felix’s efforts with the opposite sex and to give some hard-boiled advice about the best way to handle dames (that often involves some slapping around and an occasional bullet or two). Felix goes on a series of ruinous dates with a variety of women (all played with brio by Fitzgerald) who, for one reason or another, find Felix less than charming (they either laugh uproariously or run away screaming). Felix’s Virgil on this odyssey into dating hell is Linda, and the two soon come to have feelings for each other, feelings that eventually lead to Felix coming to grips with his sexuality, his divorce and his moral code. 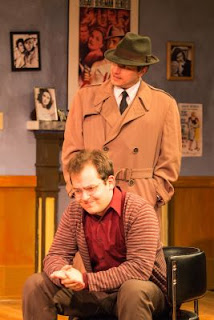 As directed by Russ Treyz, the staging is heavy on semi-slapstick, with the actors playing their roles for broad laughs, but the dialogue is pure Woody Allen, and it is difficult not to hear him…and see him…there on the stage, even going so far as to remember how he delivered a certain line versus how Johnson delivers it or how he handled a bit of business versus how Johnson handles it, which is, of course, unfair to Johnson, but there it is.

For those not Allen-haunted, Johnson’s performance is, if lacking a certain rueful morbidness, certainly entertaining and often quite hilarious. He’s ably supported by Matisa and Young and is bedeviled (and then finally entranced) by the multiple women Fitzgerald portrays (her best is the art gallery lady who’s planning to commit suicide on Saturday). D’Agostino does a fair Bogey imitation (although, again, no one can deliver the lines the way Bogey did). All in all, “Play it Again, Sam” is a refreshing evening of theater that often tickles the funny-bone. Your familiarity with the film (or the original Broadway production) may flavor your experience a bit, but the cast essentially makes the play its own.