"Man in a Case" -- Mesmerizing and Multi-faceted 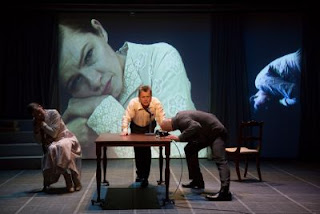 Have you ever seen “The Cabinet of Dr. Caligari”? “Nosferatu”? “M”? “Battleship Potemkin”? Well, if you have seen any of these films, or any of the other expressionist films that came out of and in the 1920s or early 1930s, you will experience a bit a deja vu when you go see “Man in a Case,” which recently opened at Hartford Stage.

Based on two short stories by Anton Chekhov, “Man in a Case” stars Mikhail Baryshnikov, but it really stars the Big Dance Theater production team, for what we have here is not so much dramatic theater as a multi-media paean to techniques that changed the cinema world and, in the process, changed how we tell stories. For some it might be off-putting, but for others it will be mesmerizing.

Theater traditionalist might wish to stay away, but for those with an open mind, who understand that for most of the twentieth century the “image” has ruled – an image that can be distorted, re-framed, duplicated, twisted and diffused – the evening offers much to think about, enjoy and embrace, for “Man in a Case” is not so much a dramatic presentation (although there is drama) as a comment on technique in storytelling, that is, an assumption that a story can be told in many different ways at the same time, through multiple images that comment on and, at the same time, contradict, what is happening. In essence, “Man in a Case” is all about point of view, or, rather, multiple points of view.

The first story – there are two, linked together by the briefest of segues – deals with Byelikov (Baryshnikov), a teacher of Greek who lives in a small Russian village and is ruled by rules. If something has not been ordained by the powers that be then it is dangerous, and going against it will bring about trouble. He is a man whose soul is configured by the arbitrary rules of the state, a man who cannot relate to his fellow human beings because diktats dictate his life. He locks himself in at night (multiple locks) only to toss and turn in his bed as phantoms (kudos to video designer Jeff Larson and lighting designer, Tony award-winning Jennifer Tipton) of the dictatorial state haunt him. And then he meets a young woman (Tymberley Canale) who offers him the possibility of human contact, contact he ultimately rejects because she is just too full of rule-breaking life (she is a dancer and, of course, the teacher can’t dance -- given the casting, a bit of dramatic irony), plus his association with her draws unwanted attention -- in the form of a scurrilous cartoon distributed liberally throughout the village…and the audience -- that makes him a local laughingstock. He retreats to his apartment and, in despair, dies.

That’s the essence of the story, but it’s not the essence of what “Man in a Case” offers its audience, for there are images upon images that evoke emotions beyond those engendered by the play’s words and the teacher’s plight, projected on multiple screens, images of laughing faces, images of a knife continually cutting into a meal but never succeeding in the process, images of school children endlessly walking up stairs, images of the teacher standing before a door, seen through a spy-hole, as he attempts to visit his fellow teachers – a visit that is ultimately devoid of human contact -- and images of the young woman laughing at the teacher, projected on multiple screens in his room. And then there is the final, diffused image of rain falling on trees (with appropriate moody sound, compliments of Tel Blow) in a forest, projected on a back screen, (Oh, how Russian, and perhaps an allusion to an opening scene in “Dr. Zhivago”), as mourners gather under black umbrellas at the teacher’s funeral. 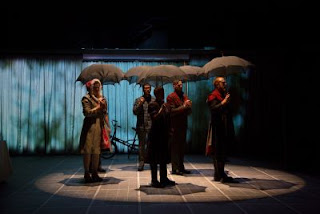 The cast of "Man in a Case" Photo by T. Charles Erickson

The second story is even simpler: an educated man is charged with working his family’s farm to pay off a debt, but when he travels to the local village he meets and falls in love with a married woman. The agony is, the woman and her husband befriend him, so he is in constant contact with them. The wife slowly becomes neurotic (captured by tapping-finger images) and is eventually sent off to a clinic to be tended to, her unrequited lover bidding her good-by in her train car, riding the train for one station stop, then detraining and walking home. He has rejected love...life...as did the protagonist in the first story…because of “rules.”

Ah, but again there is so much more here in this second story. There is a lovely ballet of hands between the man and woman, captured by a video camera set on the table where they sit, plus close-ups of the woman’s hands (again, via a video camera) as the agony of their unrequited love is dealt with, as well as a dramatic pas de deux at the end of the story as the two lovers lay on a checkerboard stage floor, their movements (a la Busby Berkely) captured from above by a camera, their limbs seeking, their bodies aching for, yet never achieving, full contact, creating stark images of physical, emotional and psychological need and want. It’s ballet, but ballet restricted by the confines of the relationship, and, as directed by Big Dance Theater’s Annie-B Parson and Paul Lazar, it’s brilliant…and poignant. 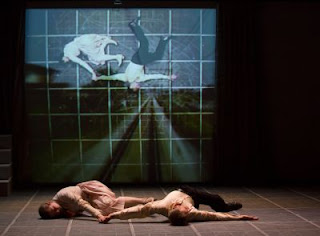 “Man in a Case” is an exercise in verbal and visual storytelling, with the visual trumping the verbal. You may come away not remembering the specifics of the two tales, but you will certainly come away with many of the visuals embedded in your mind. Is that theater? Well, I guess that’s dictated by what we expect and demand of theater. For me, the final “dance” is worth the price of admission...totally unexpected and totally fulfilling: naked need, desire and want captured in physical movement. Good stuff.