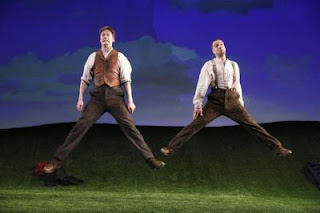 Now, don’t you know, the Yanks are in town and they’re makin’ a filllem. What’s it about, you’re askin’? Well, I don’t rightly know, but, Jaysus to Jaysus, they’re payin’ forty quid a day for us just to stand around lookin’ like the poor Irish sods we are, so if I was you, I’d get me arse down there and not ask any questions.

Good advice, for “Stones in His Pockets,” runs only until Feb. 16 at the Yale Repertory Theatre, and you don’t want to miss the acting tour de force on display there…plus the cows…and the occasional horse.

Written by Marie Jones and beautifully directed by Evan Yionoulis, this send-up of Hollywood types and Irish quirks and idiosyncrasies is an absolute delight, though it takes some easing into, for there are a host of characters – both American and Irish – all played by two phenomenal actors, Fred Arsenault and Euan Morton, who are capable of, at one second, being a crotchety old man (the last surviving extra on “The Quiet Man”), then, in the next second a wild Irish lad on Ecstasy, and then a fey assistant director, all without a costume change.

This kaleidoscopic series of transmogrifications is at first a bit confusing, but soon you get to know the characters – the frustrated film director, the female star, her heavy-handed security guard, and a host of locals – and settle in as scene after scene unfolds, with two extras – the base characters, if you will – Jake (Arsenault) and Charlie (Morton) – commenting on and interacting with all of the other characters (i.e., themselves), often requiring split-second changes that Yionoulis facilitates by having the actors spin around – Arsenault is Jake and then – whoosh – he’s mincing about as the assistant director and then – whoosh – he’s Sean, the young man high on drugs; Morton is Charlie, and then he’s the female lead, and then he’s the film director.

The play shifts gears with the opening of the second act, which has Jake and Charlie sitting down stage as dailies (created by Edward Morris) from the filming are projected on a screen – and the film sequences from “The Quiet Valley” (a nod to “The Quiet Man” and “How Green Was My Valley”) are an unqualified hoot, with Arsenault and Morton as the leads in the film – plus a lot of cows and a scene-stealing horse. There’s a certain wackiness here – think Monty Python – but in what follows Jones feels compelled to deliver several messages about various forms of oppression and (my name is Danihy, so I can write this) the inherent need of the Irish to wallow in suffering. At times it gets a bit heavy but, fortunately, these times are few and far between. Some may cavil that the complaint, made by one of the characters, that an Irish wake without whiskey is a travesty, is an ethnic slur, but having attended many such events, I would concur…as would the corpse, if he or she could sit up and voice an opinion…and some have, or so I am told.

Yale Rep is known for taking chances. Sometimes they work, sometimes (in my opinion) they don’t, but with “Stones in His Pockets” (the title referring to the weight a person intent on suicide by drowning will add to his person), the chances taken are admirable and speak to the Rep’s trust in its audience to be able to shift gears as quickly as do the actors on the stage. If nothing else, “Stones in His Pockets” points out how intimate the relationship is between what is occurring on the stage and what is going on in the minds of those watching. It’s a symbiotic relationship, as it must be. The actors offer up a created reality, but the audience must buy in, must fill in the blanks, as it were. When it’s done right, as it is in this production, everyone can take a bow (even the curtain call is humorous), including the audience.