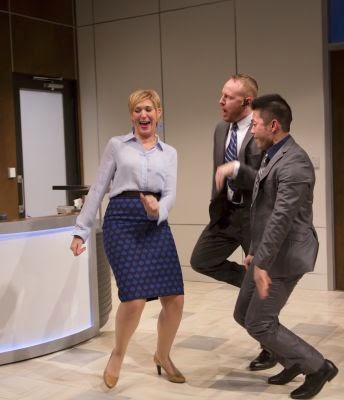 
Did you know that in corporate-land people often feel they are working in a pressure cooker, are beset by unreasonable bosses, find release via drugs, alcohol and office romances, often get fired because the company is down-sizing and, worst of all, choke when they have to make presentations? Yes, it’s all true. Old news? Well, not for Heidi Schreck, an actress and playwright whose new play, “The Consultant,” is having its premiere at Long Wharf Theatre. Apparently, Ms. Schreck, as the press release relates, once was hired to help an executive at a pharmaceutical marketing company hone his somewhat lamentable presentation skills. It was apparently a traumatic experience and led, years later, to her penning “The Consultant.” There’s a lost of grist here – corporate chicanery; Big-Pharma machinations; Machiavellian office politics -- but unfortunately not much of it gets milled.
A capable cast under the steady direction of Kip Fagan does its best to make this light-as-air piece relevant and riveting, but it is a daunting task. Yes, there are dashed hopes and dreams, but there’s no Willy Loman to make you ache for the man who tragically buys into the American Dream. Yes, there is office politics, but no blood flows, as it does in “Glengarry Glen Ross.” Clare Barron
The problems begin with our consultant, Amelia (a truly engaging Clare Barron), for as written she is not some high-powered, take-no-prisoners, “You-Can-Do-It” guru, but rather a grad student at NYU who thought she was signing up to help an executive, supposedly a Korean immigrant, with his English. The executive, Jun Suk (Nelson Lee) is neither an immigrant nor lacking in proficiency in the English language – he just chokes when having to make a presentation. Amelia is clueless about how to help him. There’s a huge industry thriving on the concept of envisioning your audience sitting in its underwear – but that isn’t dealt with. All the “How-ya-doin’?” hucksters and snake oil purveyors get a pass.
Then there’s Big Pharma, rife for pillorying. Again, there’s a free pass. About the only reference to pharmaceuticals is discussion of an ad campaign Jun Suk has created, using a picture of himself in an ad for an anti-depressant. That’s as far as it goes.
Then there’s office romance, as acted out by the much harried receptionist Tania (Cassie Beck) and an executive, Mark (Darren Goldstein). It amounts to a lot of talk, a fear of pregnancy and…well, that’s about it, and as for office politics, Barbara (Lynne McCollough), a former employee, makes an appearance and threatens to dish some dirt to a client. 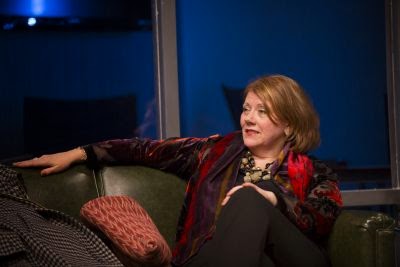 Lynne McCoullough
In essence, not much happens of interest during the 90 minutes of “The Consultant,” and what does has been dealt with in more depth and greater acerbity on both the stage and television.
There’s a coda, of sorts, which takes place in a hospital room where Suk is recuperating from alcohol poisoning (from champagne, no less!). He is visited by Amelia and Tania, who discuss how flowers should be arranged (it’ a bonding moment) and then suggest, in so many words, that it’s always darkest before the dawn and when a door closes a…well, you get the picture.
The past seven or eight years have been tumultuous, as is outlined in the show’s program: recession, the housing bubble, brokerage firms collapsing, the Dow dropping to under 7,000, home foreclosures. One would think out of all this chaos and catastrophe a play dealing with these times might have some fire to it, just a bit of outrage, some humor that cuts to the bone. Alas, such is not the case. “The Consultant” has the feel of a sitcom written long before the bubble, or bubbles, burst.
Advice to Ms. Schreck -- re-read your Dylan Thomas: “Rage, rage against the dying of the light.”