To Believe or Disbelieve 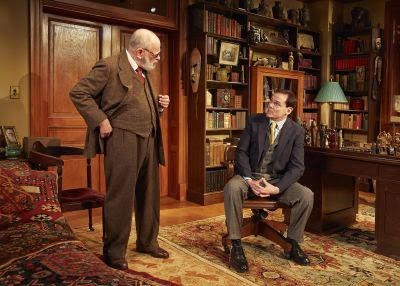 Kenneth Tigar and Jonathan Crombie.
All Photos by Lanny Nagler

Eavesdropping can have its rewards, especially if the people you are listening to have something interesting – perhaps even a bit shocking – to say. What if, for example, you’re situated so that you can both watch and hear two erudite men talk about such things as sex, religion, fantasy, pain, suffering, suicide, the existence of an afterlife, the existence of God and the meaning of life? What if these two men are Sigmund Freud, the father of psychiatry, author of “The Future of an Illusion” (the illusion being organized religion),and an avowed atheist, and C. S. Lewis, author of, among other books, “The Case for Christianity,” “Miracles” and “The Chronicles of Narnia”? Sound intriguing? Well, you don’t have to dangle off an eave or crouch down in the bushes to hear these two men have at each other, all you have to do is go to Hartford TheaterWorks, where Mark St. Germain’s “Freud’s Last Session” is running under the direction of Maxwell Williams until February 23.

The meeting St. Germain chronicles never really happened, but it’s one of the wonderful “What ifs?” of American theater (it won the 2011 Best Play Award from the Off-Broadway Alliance), for it not only offers audiences the clash of two great minds, but also the double framing devices of a looming world war and Freud facing his own demise as he struggles through the painful last stages of oral cancer.

As invades , Freud (Kenneth Tigar) sits in his office in (admirably crafted in delicious detail by set designer Evan Adamson) awaiting the arrival of Lewis (Jonathan Crombie). Freud’s wife is out shopping and his beloved daughter, Anna, also a psychiatrist, is off giving a lecture. When Lewis appears, the younger man immediately begins to apologize for the caricature of Freud he included in one of his books, believing this send-up is the reason Freud has asked to see him. He’s a bit deflated when Freud admits he has never read the book. What actually interests the ailing octogenarian is Lewis’s eschewing of atheism and embracing of Christianity. How can such a learned man subscribe to such damaging, childish myths?

What follows in this 90-minute, one-act play, is a lively and sometimes heated discussion of topics (both the sacred and the profane) that interest these men, a discussion in which they give as much as they take, Lewis often exercising his wry sense of humor and Freud resting on the “proofs” offered by science and what he believes is immutable logic. Punctuating the arguments are radio broadcasts announcing the start of the war (including King George VI’s address to his subjects chronicled in “The King’s Speech”) and Freud’s growing agony exacerbated by a prosthetic device in his mouth. 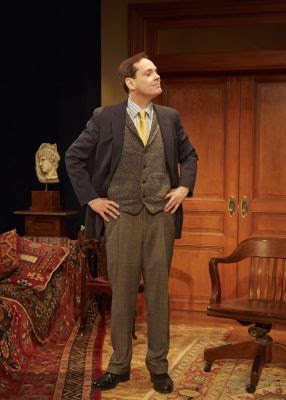 Part of the pleasure to be derived from watching as the conversation unfolds is the excellent work done by both Crombie and Tigar. Crombie gives us a Lewis somewhat in awe of Freud who nonetheless will not allow himself to be browbeaten or overwhelmed by his interlocutor’s “logic.” Crombie often uses subtle glances, restrained gestures and the hint of a smile to punctuate his arguments. His character, challenged by Freud, maintains a surface composure broken only when he recalls his service in the First World War. 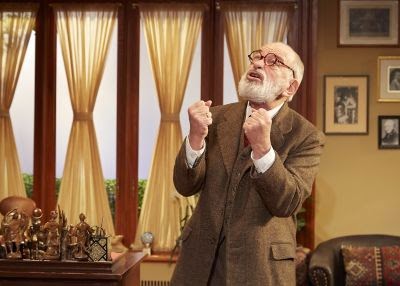 If Crombie gives us a Lewis in total control of his emotions (and his body language), Tigar creates a Freud whose passion for his work and confidence in his beliefs lead to minor eruptions of anger, frustration and disbelief as he questions the younger man’s belief in a God who allowed His son to be crucified and, more importantly, allows the world to plunge itself into another war. His emotions rise and fall, as do his hands, which point, clench and seem to plead the psychiatrist’s case.

The two actors give us fire and ice as their characters inch towards an understanding of sorts. Especially moving is a scene that occurs near the end of the play when Freud is almost overwhelmed by pain and allows Lewis to extract the prosthesis, something Freud has heretofore only allowed his daughter Anna to do. This intimate moment is so satisfying because it sheds the intellectuality the two characters have wrapped themselves in and exposes their shared humanity.

Director Williams deftly orchestrates this exercise in morality and mortality, utilizing all of the space allowed in Adamson’s triangular set. However, there are moments, especially early on in the play, when the two actors appear to be locked in place – it is only in these moments that the actors seem to be delivering lines at each other rather than to each other. However, this occurs rarely, for as the discussions advance (and Freud’s pain grows) dialogue and movement gel and support each other.

A minor point with Adamson’s set. He might have considered using non-reflective glass in some of the framed photographs. One photo, of Charles Darwin, sits on a table stage right – in the opening night performance the table was nudged several times such that the frame moved, thus reflecting light from one of the spots out into the audience. Somewhat distracting.

The movement of actors and props are minor points in an otherwise compelling production that will keep playgoers riveted, for we all have doubts about our beliefs, fears about our mortality. What Freud and Lewis discuss and argue about is the stuff of life, the enigmas and conundrums that taunt and tantalize the human mind.