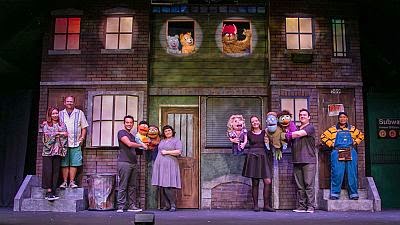 The cast of "Avenue Q." All photos by Richard Pettibone


Given all the theaters is blessed with, you never know when you will walk into one and not just be pleasantly surprised but thoroughly entertained. Such is the case with walking into TheatreWorks New Milford, which is currently boarding “Avenue Q: The Musical.” For those of you who have seen the show in another venue, it’s well worth a second look, for reasons explained below, and for those of you who have never strolled down “Avenue Q” before, TheatreWorks production, directed with precision and wit by Bradford Blake, is a delicious introduction to the somewhat risqué spoof of “Sesame Street,” an effort comparable to that of any national tour of the Tony award-winning show that I have seen.

Much of the pleasure in watching this production is that TheatreWorks boasts only 112 seats, so you have no problem, as you might in a larger venue, catching all of the nuances the actors create as they manipulate their puppets, as well as how the actors’ expressions and body language mirror and enhance what the puppets are doing (all do well at this – Carey Van Hollen, however, is superb – she and her puppets seem to share the same soul. I imagine she could intrigue simply by reading a recipe from a cookbook). It’s all a lovely and enticing pas de deux, if you will, a rhythmic and engaging blend of acting, puppetry and mime that appears effortless but is extremely difficult to pull off (much praise, therefore, must be given to puppet instructor Robert Ferreira). 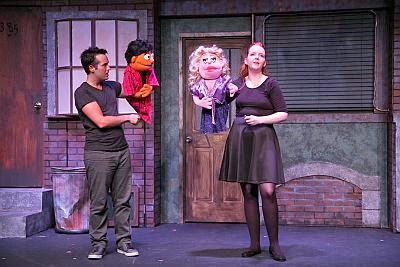 The plot of “Avenue Q,” with book by Jeff Whitey and music and lyrics by Robert Lopez and Jeff Marx, is slight: the puppet Princeton (the versatile Mike L’Atrella – who also creates the repressed “Rod”), a recent college graduate with what he deems a worthless degree in English, is searching for low-cost housing, which brings him to Avenue Q, just one step above skid row. There he meets a collection of humans, puppets and “monsters,” chief among them Kate Monster (Patricia McCarthy), with whom he will eventually fall in love. He rents an apartment from the super, Gary Coleman (yes, the child actor, fallen on hard times), played by Jasmin Love Barbosa, and then proceeds to interact with the other hard-luck residents and denizens of the area: Christmas Eve (Bomi Yim) and her paramour, Brian (Glenn R. Couture), the porn-obsessed Trekkie Monster (Jamison Daniels, who also covers “Nicky” and one of the “Bad Idea Bears”) and the femme fatale Lucy (Van Hollen – who covers the second “Bad Idea Bear” and the prim “Mrs. T,” as well as assists with “Trekkie”).

That’s basically it. The characters, whether in human or puppet form, kvetch and commiserate about their lives, attempt to find love, or a reasonable facsimile thereof, have spats and misunderstandings and generally bemoan the poor quality of their lives. It sounds like a bit of a downer, but it isn’t, because there’s a lot of tongue-in-cheek going on here and, of course, there are the puppets. In essence, “Avenue Q” is really about the human comedy – how we blunder and stumble and attempt to give our lives form and “purpose,” fail in the process and yet can laugh at our attempts.

You might think that, given TheatreWorks is nested somewhat off the beaten theatrical path, the actors would be, well, second-tier, but that is not the case. This is as strong and competent an ensemble of actors as you could wish for, headed by L’Altrella, who captures the audience with the first appearance of “,” and then cements the relationship as he introduces “Rod.” He is ably supported by McCarthy as the sweet-voiced Kate Monster, and Van Hollen, as her puppet, “Lucy,” tempts and entices the hapless “.” Daniels’ “Trekkie Monster” is delightfully, unabashedly pro-porn and his “Nicky” pathetically needful, and Yim’s “Christmas Eve is the “Tiger Wife” every submissive male hungers for.

Special mention should be made of the efforts of set designers Richard Pettibone and Glenn R. Courture. They have managed, given the limitations of TheatreWorks’ stage, to create a marvelously evocative yet functional set that supports the rapid scene changes and character interactions. Kudos also to sound designers Bradford Blake and Tom Libonate – the sound effects are dead-on, although, because the actors are apparently not miked (no great problem, given the size of the theater), consideration should have been given to audio fall-off when the actors turn upstage while delivering lines or singing – some lines and lyrics get lost. A minor point.

All in all, this is an engaging production of what is fast becoming an American musical classic. A word of caution, however – parents who are considering bringing their offspring to enjoy the show must be warned that there are moments (especially when the puppets Princeton and Kate Monster very graphically get it on) that may not be suitable for young eyes and ears. However, if you do bring the little ones along, perhaps you can just tell them that the two puppets are practicing multiple wrestling holds. That might fly (Not!).