MTC Mainstage Has a New Home 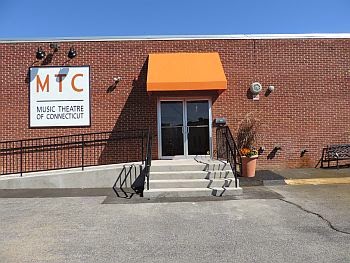 Entrance to MTC. All photos by the author


The first time I attended a performance at Music Theatre of Connecticut in , more commonly referred to as MTC Mainstage, I got lost. Following hand-written directions, I turned down a side street, missed the driveway onto which I was supposed to take a left, and drove merrily off into the dark. Doubling back, and re-reading the directions, I drove up a driveway and turned left into a parking lot at the rear of an office building. This can’t be right, I thought. But it was.

There was no neon signage, no marquee, nothing to tell me that I had arrived at my destination other than a sandwich board announcing the night’s production and confirming that, yes, I had arrived at MTC Mainstage. I was less than overjoyed.

I approached the single, rear door with a bit of trepidation. What had I gotten myself into? I walked in and entered a corridor that immediately reminded me of my first day in third grade back in the 1950s – there were hooks for coats, a low rack for shoes, and a sign that urged me to remove my shoes – Lord help me, I did. I thought this just might be a Zen approach to theater – maybe we would all sit cross-legged on cushions for the performance and perhaps achieve satori. The corridor was lit in a pale, somewhat sulfurous light that did little to dispel the feeling that I was going to be asked to sit up straight, do sums and write an essay about my summer vacation, with the possibility that I might be hit in the back of my head by a spitball.

Feeling a bit like dead man walking in socks, I made my way down the corridor, noting the pictures of past productions on the walls, and then took a left into a foyer that reminded me of the entrance to some type of high school fair, something thrown together on the quick to hide the institutional decor. There was no glitz, no glamour – just an entrance area that evoked little excitement and less expectation. I picked up my press ticket and packet, explained why I was shoeless, was told that the sign was for some type of kids’ class down the hall (I was suitably embarrassed) and passed into the theater proper…and stopped.

I suddenly felt like a sardine being enticed into the can – what I saw was a limited staging area, a pseudo-thrust stage of sorts defined by three rows of seats house left, right and center. If I had been claustrophobic I would have bolted. I was guided to my seat, where I sat, attempting to hide my shoeless feet. I looked at the scenery, such as it was. I looked at curtains that seemed to drape possible entrances and exits for the cast, I looked at the tiny area fronted by a piano that I sensed was where the orchestra – band – combo – whatever – would soon appear. I mentally measured the distance from my seat to the back of the stage area – maybe 10 or 12 feet at best. Then I told myself – be objective – don’t pre-judge – good things often come in small packages. Yeah, right. I was already writing my review in my mind, trying to be as kind as possible, knowing that I would do a one-shot and never come back, because what could be done with such limited space in what was essentially the basement of an office building? I tucked my feet under my chair and thought: let’s get this over with so I can get my shoes and go home.

I have been back to MTC many times since then, often to be enchanted and delighted. The theater’s intimacy and the quality of its productions have been infectious. Of recent note: “Cabaret,” which was revelatory – “Master Class,” which was riveting – and “The Fantastiks,” which was engaging. Initial trepidation had morphed into eager anticipation of the theater’s next efforts, so I was of two minds when it was announced that the theater would be moving to new quarters – I had come to appreciate the somewhat ramshackle, intimate venue, and yet, this creative/production team, headed by Kevin Connors and Jim Schilling (co-founders of MTC) had proven it could do marvels in minuscule space and therefore deserved to stretch its wings, and stretch its wings it has. 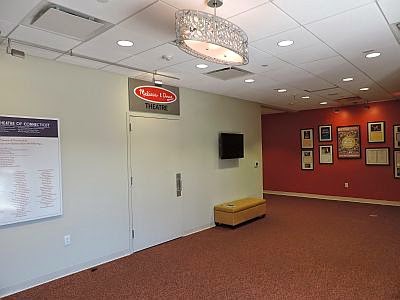 MTC’s 2014 – 2015 season, which begins on November 7 with “The World Goes ‘Round,” a salute to the song-writing prowess of the Kander and Ebb team (“Chicago,” “Cabaret,” etc.), will be at the new digs, which, at 509 Westport Ave. in Norwalk, is just a few miles south of its old location. Nested behind Nine West and Jones , the theater no longer hides its presence, for above the entrance is a bright orange awning and to its left a sign proudly proclaiming that this is the home of MTC Mainstage.

No longer will playgoers get the eerie sense they are entering the stygian depths when they attend an MTC production, for the lobby, bright and airy, feeds directly into the Melissa & (so named in honor of the toy company greatly responsible for providing the financial wherewithal for the new theater). Inside the 108-seat theater, the audience will still enjoy the intimacy for which MTC has been famous, for the thrust stage is bordered on three sides by just four rows of seats. “At the old theater,” Connors said, “we emphasized experimental rather than presentational theater – that philosophy moved with us to the new theater.” Thankfully, the soul of MTC has been preserved. 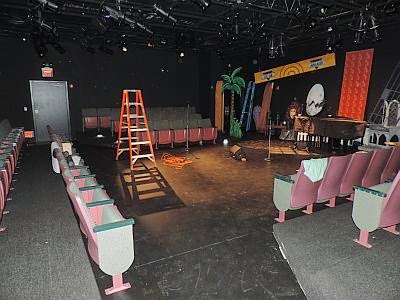 MTC’s management had been contemplating a move for many years, but as Connors explained, it took quite some time to find just the right building, and when it was found, Connors didn’t want to start the formal fundraising process until he was sure they had gained municipal approval for what was planned. 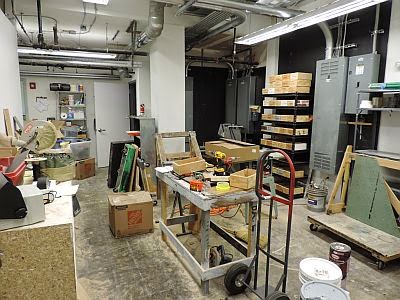 Here's where MTC's scenery will be crafted

Basically, what MTC purchased was four walls. The interior of the building was gutted and remodeled to meet MTC’s needs. As work commenced on the renovation of the building, which David Heuvelman, the man responsible for most things technical at MTC, described as a “giant open nothing,” consideration was given to possibly renting the lighting and sound equipment but, as Connors noted, renting would have cost about 75% as much as simply buying all new equipment – so that’s what they did, and it’s all state-of-the-art, to the tune of $250,000. 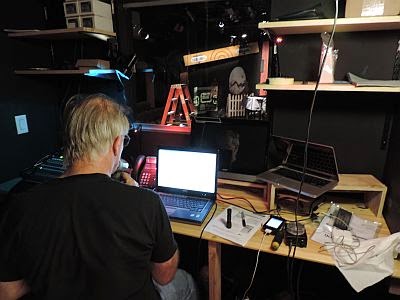 Although, given the nature of a “box’ theater, there is no fly space (i.e., space above the stage proper where scenery can be raised and lowered), the ceiling is 11 feet, five inches above the floor, which has allowed MTC to install a professional lighting grid (controlled from a booth that now actually looks out onto the stage rather than the old area that was tucked into a corner house left). There is, however, room in the wings to allow for entrances and exits and the shifting of scenery. Connors is especially pleased that he now doesn’t have to worry about the “dead” space stage left that the old theater presented – when actors were blocked into the area there was nowhere for them to go, no “out.”  To escape, their only option was to execute a cross stage right. 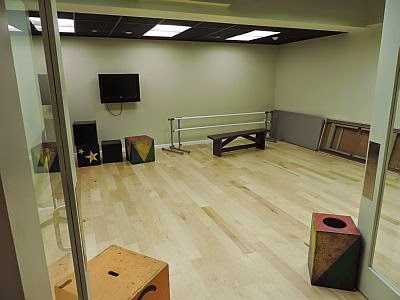 One of MTC's rehearsal rooms

Another limitation the old theater presented was the number of people who could be cast for any show. Connors noted that the most the old stage could handle was, at best, eight actors; the new stage can easily accommodate 12 or more actors – “And,” Joe Landry, MTC’s marketing director noted, “you can do choreography.” But MTC’s new digs mean much more than new lighting or enhanced cast size. As Connors explained, although they knew they were presenting quality productions, MTC, given its somewhat hidden location, lack of signage, and the overall “afterthought” feel to the physical plant, was not providing the total theater experience that audiences look for or, as Connors put it, it wasn’t “a true destination.” It was a night out, but was it a “night out at the theater”? MTC knew that it needed to offer its patrons the complete theatrical gestalt. “We had to do something,’ Connors said, “if we were going to grow.”

And do something they have done. Besides the new staging area, on the first floor there’s a large construction area located through a door stage left and executive offices, plus – and this Connors takes great pride in – modern, spacious rest rooms for patrons. The second floor hosts several rehearsal studios, dressing rooms, two rooms devoted to props and costumes and a green room (basically a holding area for actors waiting to go on) with a sound feed, which means the actors will be able to hear what is occurring on-stage. 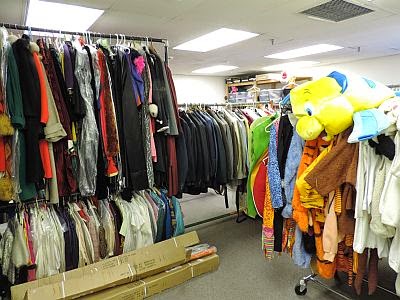 There’s an electricity that seems to run through the new building that has nothing to do with wiring or amperage. Everyone involved with MTC simply can’t wait to start playing with all the new toys – and the new space – that this move has provided, but there’s something more, something perhaps intangible but palpable, and it has to do with MTC’s connection with and commitment to its loyal audience. The folks at MTC just can’t wait to share what they have wrought with the folks who, year after year, walked down the dingy hall, took a left into the somewhat shabby foyer and sat in a theater whose dimensions were those of a bomb shelter. In other words, MTC can’t wait to say: “Welcome. Thanks for staying with us all these years. We’ve done this for you. Enjoy.”
Posted by Geary Danihy at 7:38 AM