Order in Chaos – Chaos in Order 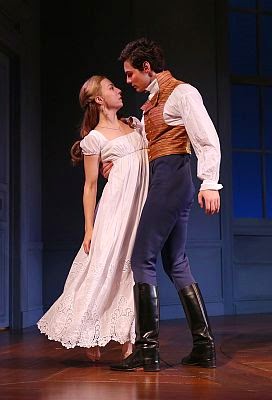 Rebekah Brockman and Tom Pecinka.
All photos by Joan Marcus.

Although Tom Stoppard’s “Arcadia,” which recently opened at the Yale Repertory Theatre under the direction of its artistic director, James Bundy, can be enjoyed on its own merits, to truly enter into the world of the play you may want to brush up on such topics as chaos theory, entropy, the second law of thermodynamics, algorithms and fractals, population dynamics, determinism and, finally, the demise of Classicism and the rise of Romanticism (and its impact on gardening in England), for Stoppard has worked them all into this comedy of ideas that demands close attention if you wish to follow the multi-era mirroring that is at the heart of the play. You might also feel compelled, after seeing this production, to purchase a copy of the script so you can read the lines that are lost due to sound level or the actors not pausing for the laughter to subside before delivering their next lines, both of which work against paying close attention, and paying close attention is central to embracing “Arcadia.”

And then there is Death, the ultimate proof of entropy, and the demise of both people and ideas is central to the play, for “Arcadia,” the play’s title, is a shortened version of the title Stoppard had in mind: “Et in Arcadia ego,” the translation of which has been argued over, both by scholars and, more to the point, characters in the play. In essence, what it refers to is that even in an earthly paradise death is ever-present, so lurking beneath the mask of comedy is, if not the mask of tragedy, then certainly the mask of mortality, the idea that all passes away.

The play is set in , an English manor, in two time periods: 1809 – 1812 and the present (the play was written in 1993). The minimal set by Adrian Martinez Frausto is true to Stoppard’s intentions, for it consists of a large table in front of high windows and double doors that lead out into the manor’s gardens, the desk being the inescapable focal point, one that accumulates, over the course of the two acts, books, letters, drawings and electronic devices of both eras, a visual representation of the doubling and merging of past and present that are two of the play’s central tropes. There is also a tortoise that appears in every scene, a constant in an otherwise ever-changing world. 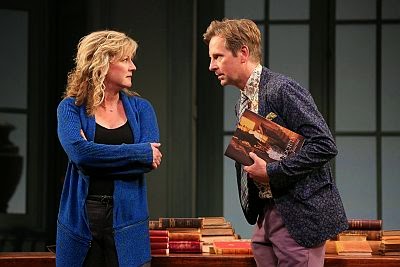 As the play opens we are introduced to Thomasina (the engaging Rebeka Brockman), a bright 13-year-old who is being tutored by Septimus Hodge (Tom Packina), a friend of the poet Lord Byron (an unseen presence in the play). The two have spirited discussions throughout the play about many of the topics listed above, with Thomasina challenging accepted wisdom. Septimus at first humors the young girl but he soon comes to respect her insights into, among other things, the nature of energy and chaos versus order. He also slowly falls in love with his charge.

Hodge is a man of many talents, including those of the bedroom, and it his amorous abilities that get him into trouble with the second-rate poet Ezra Chater (Jonathan Spivey) who, after learning of Hodge’s dalliance with his wife, challenges him to a duel. Urging him on is Captain Brice (Graham Rowat), the brother of Lady Croom (Felicity Jones), Thomasina’s mother, who is also drawn to Hodge. Adding to these intrigues is Richard Noakes (Julian Gamble), the manor’s gardener who wishes to transform the gardens from their classic style to something a bit more Gothic, including a hermitage fit for a hermit. To push his project he has a book that shows the gardens as they currently exist with overlays that depict the Gothic transformation. It is on one of these overlays – the one showing the vine-covered hermitage – that Thomasina draws in the dark figure of a hermit. That bit of graffiti will reverberate centuries later. As already noted, close attention must be paid to follow the shifting tides of relationships and intellectual discussions, for they are varied and many. 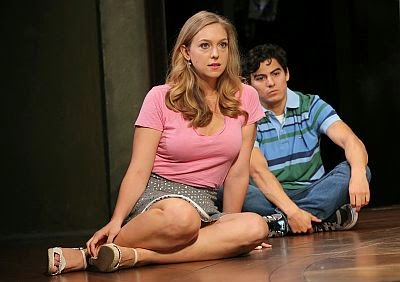 Now, imagine that you are two centuries removed from all of this and are surveying the fragments of letters, books and other clues to the past (including the gardener’s book) in an attempt to piece it all back together. This task, from different perspectives, has been taken on by Hannah Jarvis (Rene Augesen), the author of a book on Byron’s mistress who is now researching the hermit who supposedly lived in the hermitage for many years, and Bernard Nightengale (Stephen Barker Turner), a university don who believes he has stumbled upon the reason for Lord Byron’s hasty flight from England in 1809. The two are being hosted at the manor, somewhat reluctantly, by Chloe Coverly (Annelise Lawson), the 18-year-old daughter of the current Lady Croom, and Valentine Coverly, Chloe’s older brother who is a graduate student in mathematics. There is also a mute younger brother Gus (Bradley James Tejeda – who also plays Augustus Coverly, Thomasina’s younger brother).

As the play shifts back and forth between the two periods, Stoppard deals with how the past can so easily be misinterpreted yet still dramatically echo in the present, often using dramatic irony to make his point for, of course, the audience is aware of how wrong the present guests at Sidley Park are about what happened in the past and, at the same time, how wrong those who lived those events were about what was actually happening. In essence, it’s a dual fun house with mirrors that distort reality and in so doing call the very concept into question.

Considering the play’s structure, there is an inevitable ebb and flow to the evening, nicely handled by Bundy, who has a keen eye for the comedic moments inherent in the script. As evidence of this, there is a scene in which Lady Croom and Hodge are having a passionate discussion that is interrupted by the butler, Jellaby (Michael Rudko), who is carrying a tea service on a tray. There is little dialogue here, but the moment is memorable as Lady Croom and Hodge suffer rising conversation-interruptus while waiting for Jellaby to complete his duties. Another delightful, extended, scene opens Act Two when Nightengale (Turner is dead-on here) gives us the essence of the pompous professor eager to present his theories on trivial matters, issues no more important to the daily warp and woof of life than a heated discussion of how many angles can dance on the head of a pin.

Given that there are numerous plot points and multiple references to scientific, philosophical and religious theories imbedded in the dialogue, full enjoyment (and comprehension) of the play requires that the dialogue be clearly audible, and this is one of the few complaints one might lodge against this production for, as already mentioned, it is often difficult to hear what the actors are saying. Quite often a mere cough from an audience member was enough to muffle a line, while at other times the actors speak their lines over the audience’s laughter rather than waiting for it to subside.

There is also a strange emotional imbalance in the play’s final moments, which consists of Hodge and Thomasina waltzing, which is touching, especially since the audience now knows what fate awaits these two, while Jarvis awkwardly dances with Gus Coverly, which evokes no emotional reaction (Jarvis dancing with Nightengale as a counterbalance would have made more sense). This imbalance is all the more obvious since Stoppard has, throughout the play, so successfully balanced the two eras and the characters that inhabit them.

This rich, multi-layered production has a certain time-release quality to it, in that the relevance and import of what has been seen becomes fully apparent only after the curtain has fallen and you have time to think and ponder. Given that, even though the play runs close to three hours, you feel that a second visit is warranted if only to savor all of its nuances, allusions and subtleties.