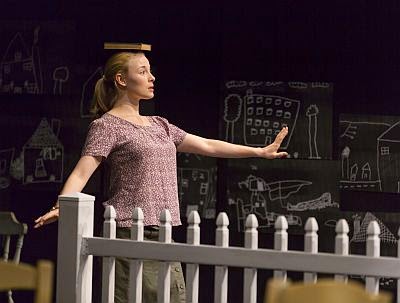 Jenny Leona as Emily. All photos by T. Charles Erickson

Well, based on the themes Thornton Wilder wove into his 1938 Pulitzer Prize-winning play, it can be anywhere, for no matter what town or hamlet you visit there will be stories of love and loss, youth and old age, friendship, courtship, marriage and despair, plus, if you step back for a moment, the sense that life goes by too fast and it is only after all has passed that you realize what you have missed, the small moments you do not recognize as containing the essence of what it means to be alive.

That being said and acknowledged-- that Wilder’s play embraces verities that transcend place and time -- the question must once again be asked when faced with experiencing Long Wharf Theatre’s current production of Wilder’s play as directed by Gordon Edelstein, the theater’s artistic director. Where is “Our Town”? 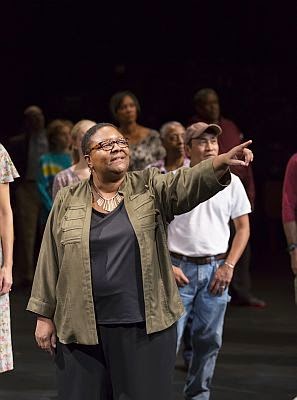 Wilder set his play in the first years of the twentieth century in a town called Grover’s Corners. Eternal verities aside, this is a very specific time and very specific place, and one must ask how important this time and place is to the play? If they are incidental, then Long Wharf’s staging is successful, but if time and place…and tone…and a sense of nostalgia…are intrinsic to the play, then the production falls short of being totally satisfying.

Central to the play is the role of the Stage Manager (Myra Lucretia Taylor), the quasi-omniscient narrator who directs the evening, transcending time and place to reveal and comment upon the lives of those living in Grover’s Corners. It is the Stage Manager who sets the tone of the production – the character knows the townspeople, but it is also necessary that underpinning this ‘knowing’ is a sense that the Stage Manager loves and embraces these characters, for it is that love, that warmth, that embrace, that gives the play its heart. Taylor handles the ‘omniscient’ part quite well, perhaps too well, because the warmth, the love, seems to be missing, so it becomes an exercise in analysis – her Stage Manager points out that this character does this and that character does that, but you never get the sense that this Stage Manager has to restrain herself from embracing any of the characters. She is aloof, like some Greek god looking down from at the simple joys and sufferings of the lesser creatures populating Grover’s Corners. 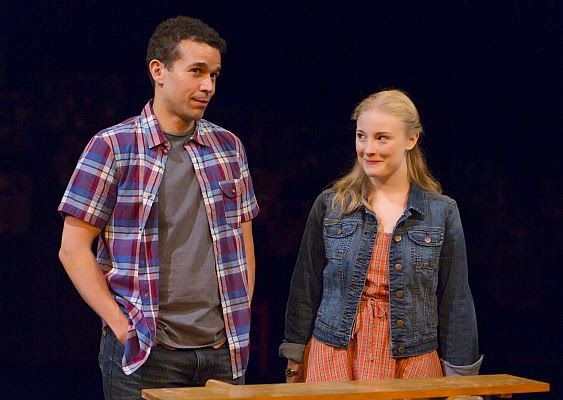 Rey Lucas as George and Jenny Leona as Emily

Then there is the creative decision to populate Grover’s Corners with as ethnically diverse a population as possible -- I didn’t see any Native Americans, but there might have been an Arapaho or Comanche lurking in the background of the rather large wedding crowd at the end of the second act. This “updating,” one supposes, is meant to reflect modern demographics, a gesture towards political correctness, but it adds nothing to the play; it’s just there as an unnecessary visual statement of the play’s premise: that regardless of where we live and who our neighbors are, we all experience humanity’s foibles and failures, triumphs and delights. It’s trumping the obvious.

The first and third acts of the play seem strangely devoid of emotion, which has little to do with Eugene Lee’s spartan set – essentially tables and chairs – and more to do with how the Stage Manager frames and comments upon the action. It is only in the second act, which focuses on the budding romance between George (Rey Lucas) and Emily (Jenny Leona) and culminates in their marriage, that Grover’s Corners seems to take on a life of its own. Much credit is due both to Lucas and Leona, for individually and together they capture the essential inarticulateness, rapture and awkwardness of young love. It is also in this act that the two families, consisting of Dr. Gibbs (Don Sparks) and Mrs. Gibbs (Linda Powell) and Mr. Webb (Leon Addison Brown) and Mrs. Webb (Christina Rouner), come to life and engage the audience. 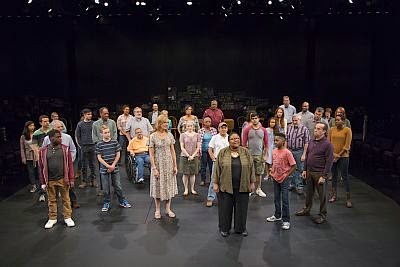 The cast of "Our Town"

Often, “concept” -- that is, the creative team’s vision or “take” on the production of a well-known play -- can enhance, magnify and revitalize the play, allowing the audience to see the work with “new eyes.” Other times, the “concept” weighs down the play, forcing it to be something that it is not, drawing attention to itself and away from what the playwright wrote. Which result is evident in ’s “Our Town” is, ultimately, for the audience to decide. The answer might well be found in thoughts that rise while driving home from Long Wharf: do you feel that you have come away from a visit to Grover’s Corners, a visit that made you privy to the hopes, dreams and fears of the hamlet’s residents, or were you simply just watching an interesting staging of “Our Town”?