The Catcher in the Court 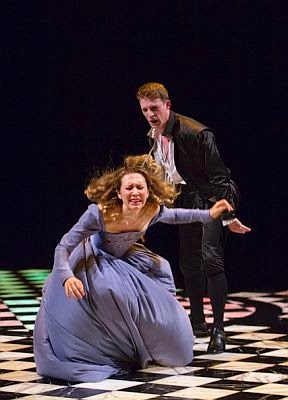 
Over the centuries, critics and playgoers alike have had, if not problems, at least questions about “Hamlet,” most centering on the eponymous character himself. Chief among these “questions” is the prince’s apparent madness – is it pretense, real, or a little bit of both? The current production of Shakespeare’s tragedy at the Hartford Stage, under the sure-handed, creative guidance of artistic director Darko Tresnjak, appears to answer this and many other questions. This illuminating and totally enjoyable night of theater gives us a Hamlet for the twenty-first century while staying true to the Bard’s original intentions. It is a must-see production for theater-goers of all ages, but especially for students who think Shakespeare is “boring!”

The answer to the question posed above is in the form of Zach Appelman’s take on the prince. Many fine actors have played this role, some well into their careers, so we often forget that Hamlet is a stripling, a student, a bright, somewhat opinionated, sharp-tongued college student – you know, someone who perhaps over-indulges in a beer hall, is full of his new-found knowledge and revels in his rebellion against those who have made the mistake of becoming adults and therefore, by definition, are either hypocrites or phonies. Yes, there’s just a touch of Holden Caufield in Appelman’s prince of …and it works, so much so that laughter often punctuates the evening, something seldom heard when attending a production of “Hamlet.” Appelman, under Tresnjak’s focused direction, has given new life to a character often made ponderous by an over-emphasis on brooding, self-doubt (even self-hatred) and oedipal urges. 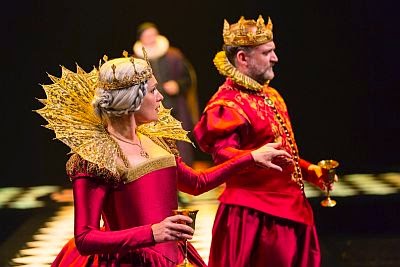 Yes, Appelman’s Hamlet is conflicted, but that doesn’t stand in the way of his taking a certain perverse delight in playing the role of the aggrieved son of a murdered father, for Hamlet, as is readily apparent in the scene with the troupe that has arrived at Elsinore to entertain, has thespian tendencies, and these tendencies are part of what leads to Ophelia’s suicide and the violent end of the story. It has often been suggested that Hamlet’s “tragic flaw” is his propensity for hesitation, but in this production it becomes apparent the “flaw” is that Hamlet is, at heart, just a boy, a very smart, perceptive boy, but a boy just the same, and the ghost of his murdered father, who demands that his son avenge his murder, thrusts Hamlet into a world of adults that he comprehends all to well intellectually but is ill-equipped to deal with emotionally. Hence, Hamlet does what many a young adult would do in this situation, he takes on roles, multiple roles to fit the moment, and derives a certain delight in the play-acting.

Appleman is supported by a strong cast, with James Seol as Horatio, Andrew Long as King Claudius, Kate Forbes as Queen Gertrude and Brittany Vicars as Ophelia. It is, however, Edward James Hyland, as the pontificating Polonius, who most ably helps to define Hamlet’s character, for if Appelman’s Hamlet is the essence of brash youth then Hyland’s Polonius is the antithesis, an adult, perhaps once a brilliant student, who has become enamored of his own wisdom and words, a man Hamlet makes fun of yet, seeing this production one gets the sense that if Hamlet had lived and aged into his semi-dotage he might easily have become a Polonius – they are the yin and yang of the same character: full of themselves and eager to dispense their versions of “wisdom.” 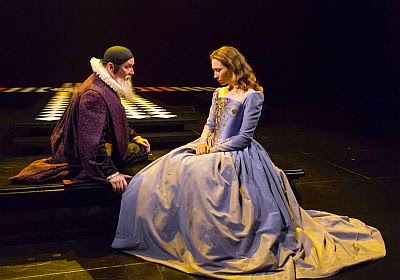 Tresnjak, who has done double duty here as scenic designer, has been guided by the idea that “the play’s the thing,” so the minimalistic set (save for the dead king appearing astride a horse – an arresting moment), consists of a raised platform, top-lit and illuminated from below by lighting designer Matthew Richards, that resembles a Celtic cross, a cruciform framed by three black benches. Except for a chandelier that descends to signify court scenes and faux proscenium arches that frame the traveling actors’ play within a play that captures “the conscience of the king,” the stage is left to the actors to create the world of , which they do brilliantly, garbed in glorious period costumes by Fabio Toblini.

There are those who deem themselves “purists” – whatever that means – who may find Appleman’s Hamlet a bit too excessive, a bit too flippant, and might quote Hamlet’s own words to the traveling actors as a criticism of Appleman’s somewhat hyperactive prince: “Nor do not saw the air too much with your hand thus, but use all gently, for in the very torrent, tempest, and (as I may say) whirlwind of passion, you must acquire and beget a temperance that may give it smoothness.” But Appleman’s gestures, his artifice, his antsy feet and limbs, are all of a piece with the idea that his Hamlet is playing a role, although the role-playing soon takes on a life of its own and carries the young prince far beyond his nascent understanding of the situation. Wrapped up as he is in the thrill of the artifice he has little awareness of the impact his actions have on others. 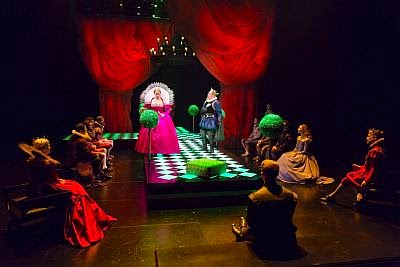 Adam Montgomery, Floyd King (center)
and the cast of Hamlet

All in all, this is a vibrant, artistic rendering of Shakespeare’s most psychologically perceptive, challenging play. Tresnjak and company give us a “Hamlet” that some may find disturbingly off-center, but for others, this is a “Hamlet” that reveals aspects of the play that have heretofore not been given full consideration. In the end, we are presented with the idea that “Hamlet” is about “theater” as it manifests itself in our daily lives. Thus, there is a play within a play within a play, with Hamlet the playwright, the protagonist and, tragically, the victim of his own creation. Ophelia’s corpse and the bodies strewn on the court floor at the end of the play are testaments to the lethality of artifice, play-acting taken too far -- something callow youths are prone to do as they become enraptured by their enthusiasms or captured by their bedevilments.