“Comedy is Hard,” but Easy on the Eyes 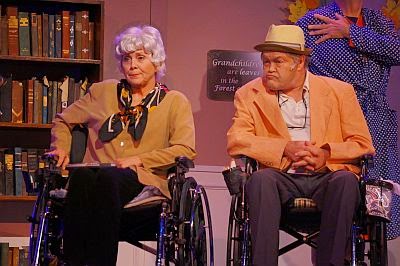 
It’s the end of the yellow brick road for Kay and Lou and, unfortunately, there’s no Emerald City or wish-fulfilling wizard awaiting them, just The Actors Home in New Jersey, which means they’re not in Kansas anymore, and they’re not on stage anymore, and the glitter has now turned to sawdust, but these two aging theatrical pros are flint and tinder, and when they meet in a park something sparks, and that’s the dramatic thrust of Mike Reiss’s “Comedy is Hard,” which is enjoying it’s world premiere out at the Ivoryton Playhouse. This amiable though flawed comedy (after all, comedy is hard) directed with a nice touch by Jacqueline Hubbard, has enough wit and, for those of a certain age, ample allusions, to make for a pleasant and, at times, hilarious, evening.

It doesn’t hurt that Lou, a second-rate stand-up comedian, is played by Micky Dolenz (yes, the Micky Dolenz who, way back when, Monkeyed around), and Kay is played by Joyce DeWitt (who once taught us that “Three’s Company). The two work well together, first (in classic sit-com fashion) finding each other distasteful and then, as they reveal more about themselves and their careers, come to like and, perhaps, love each other (Think of “The Gin Game” with one-liners).

There’s a familiar, satisfying arc to Reiss’s play, and the two leads, for the most part bound to wheelchairs throughout the evening, know what they are about: Dolenz’s Lou (aka “Skippy) is raunchy and flippant; DeWitt’s Kay is acerbic and disdainful, and the two characters clash initially over the comedy-drama argument that has been going on since the time of Plato and Aristotle – which is more difficult to perform? Which is more relevant and audience-pleasing? The argument drives the production and, in the end, is its stumbling block.

Reiss, former president of “The Harvard Lampoon” and one of the prime movers of the award-winning animated TV show, “The Simpsons,” is, obviously, no stranger to comedy, and he spices the script with both its theory (The rule of three) and practice – much of it works, and some of it is hilarious, but there are moments when the one-liners fall flat or, in several cases, are simply offensive or, even worse, don’t make much sense. However, the audience is in a forgiving mood throughout the evening, feeding off Dolenz’s brio and DeWitt’s presence (who knew, based on her performance in the famous sitcom, that her voice was so commanding and multi-layered?).

There are sub-plots – Lou’s essentially estranged son, Phil (Michael McDermott), comes to finally understand and accept his father – it’s a bit maudlin and forced but…whatever. Then there’s Valentine (Dorian Mendez), Kay’s nurse, who is limited throughout most of the play to one word: “Que?” A lot more could have been done with this character, especially in the second act but…whatever. And then there’s the Homeless Man (Michael Hotkowski), a one-time actor who, given alms by Kay, seeks his inner thespian by taking on the role of Sesame Street’s Elmo – again, more could have been made of his plight. The most interesting, intriguing character is Mr. Holroyd (Dan Coyle), another “resident” of the Actors Home who is catatonic, save for the moments when he comes to life to fill a role or speak to the audience – again, not enough is done with this character.

The play’s first act is essentially given over to “getting to know you,” with the subordinate establishment of the comedy/drama argument. The second act brings the argument to the fore, and it is here that the play shines and, eventually, stumbles, for Kay has suggested that she and Lou, or “Skippy,” stage an abbreviated performance of Samuel Beckett’s “Waiting for Godot,” to which they will invite schoolchildren (Duh!!). The “rehearsal” scenes reveal that Lou truly understands the absurdist nature of the profession they have both chosen, and of life in general – after all, he tells Kay, he’s not as stupid as he looks. On the day of the show, Lou suddenly has stage fright and, in a moving moment, reveals to Kay his realization (while watching, years ago, a very young Richard Pryor open for him) that he just didn’t have it as a comic – that the world and its audience had moved on and he was stuck in the past, a second-rate Borscht-belt comic with a tired routine.

“Godot” proceeds, however, thanks to the awakening of Mr. Holroyd, who had played the role of “a hundred times.” As expected, the play drags and bores, until Skippy rolls out onto the stage in a motorized wheelchair to do his shtick – comedy intruding into and commenting on drama. Get it? However, it’s here that Reiss misses a major moment, for we are led to believe that Lou, or Skippy, (especially in the rehearsal scenes) has pondered the fact that drama – and tragedy – are the handmaidens of comedy, but his routine evokes little more than Bozo the Clown, and his lines are the same, old, tired stuff that he died with years ago. Kay and all gathered claim that Skippy has saved the day through comedy, but he hasn’t. His character hasn’t embraced the absurd, merely offered up the idiotic.

The play ends with a somewhat gratuitous revelation of past connections between Kay and Lou that have nothing to do with the play’s themes, save for the tried and true vaudeville preoccupation with sexual prowess and size of a male’s member. Would that Reiss have gone elsewhere.

“Comedy is Hard” is a pleasing work in progress. As it stands right now, you chuckle at times and, maybe once or twice, guffaw, but it’s all surface humor. Hubbard has done the best she can with the material she has been given, but Reiss needs to step back, take a breath, and see the possibilities inherent in the characters he has created, and the underlying dynamic of comedy—drama—tragedy. There’s a better, more multi-leveled and satisfying play lurking in the wings.