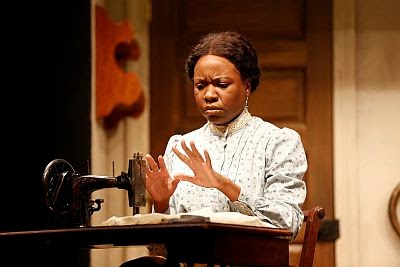 The Westport Country Playhouse is currently boarding a lovely production of Lynn Nottage’s “Intimate Apparel,” sensitively directed by Mary B. Robinson. This touching, engaging, funny play about a black seamstress living in New York City in 1905, inspired by the life of Nottage’s great-grandmother, speaks to many issues without resorting to diatribe or shrillness. It can be enjoyed on its surface level, for it is a linear drama complete with rising action, climax and denouement, as well as for its exploration of the social issues that swirl, and sometimes boil, within the melting pot metaphor.

The play opens with Esther (the superb Nikki E. Walker), a black seamstress, working at her sewing machine in the boarding house room she has lived in for the past 15 years. She is soon visited by Mrs. Dickson (Aleta Mitchell), the owner of the boardinghouse, and their conversation establishes the major dramatic theme that will drive the play: Esther is 35 years old and fears that she will never be married. However, the matron gives her a letter from a man named George Armstrong (Isaiah Johnson), a native of who is currently in , a laborer working on the dig that will eventually become the . He has been told about Esther by one of his fellow workers and has decided to write to her, hoping that she will write back and ease his loneliness. 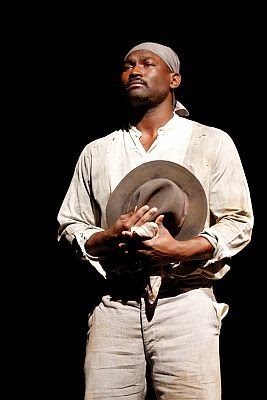 Disregarding Mrs. Dickson’s reservations, Esther is inclined to respond, the only problem being that she can neither read nor write. Reluctantly, she explains her problem to one of her clients, Mrs. Van Buren (Leighton Bryan), a white, childless socialite whose husband has begun to wander, and the lady, on a lark, suggests that she help Esther correspond with George. Letters travel back and forth, some of Esther’s written not by Mrs. Van Buren but by Mayme (Heather Alicia Simms), a black prostitute whom Esther has befriended. 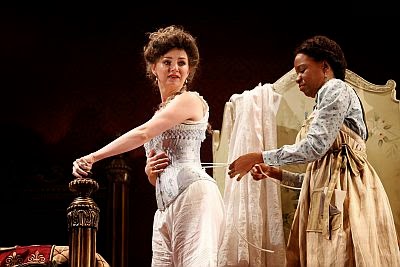 As the epistolary romance grows, Esther continues to ply her trade, which entails her visiting Mr. Marks (Tommy Schrider), a Jewish draper who works out of his apartment. The two are attracted to each other, but race and religion create insurmountable barriers and the only way they can express their feelings is through discussions of the richness – the feel and touch – of the various wares Marks has to offer. 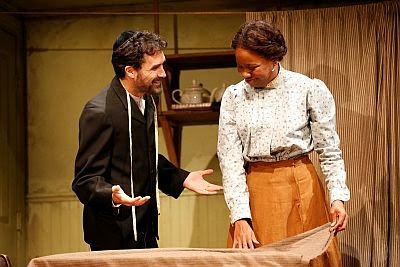 The first act ends with George’s arrival in . The couple, with Esther dressed in a bridal gown, meet for the first time and, on a darkened stage, turn to face the audience, as if posing for a wedding picture. Superimposed above them is the caption: “Unidentified Negro Couple ca. 1905,” evoking the thrust of Ralph Ellison’s “Invisible Man,” the 1952 novel that deals with, among other things, the idea that African Americans were not seen as distinct people but rather perceived and defined by the stereotypical roles they filled, that as human beings they were essentially invisible to the white society in which they lived. 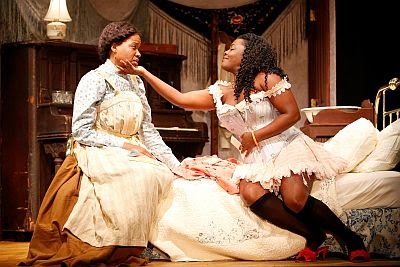 The second, somewhat darker act deals with Esther’s relationship with her new husband and her growing awareness of her own self-worth, an awareness that brings her full circle back to Mrs. Dickson’s boarding house, somewhat sadder but also a great deal wiser. The play ends with another “photograph” -- as Esther sits at her sewing machine, again on a darkened stage, there is another caption: “Unidentified Negro Seamstress ca. 1905.” Of course, for the audience, she is not an “unidentified Negro seamstress,” she is Esther, a woman the audience has come to care deeply about, a human being who shares with the audience members the fears, desires, dreams and defeats that are the warp and woof of life.

The cast that brings this story to life is superb. One might only question Johnson’s accent, for he often sounds as if he is more from County Cork than from Barbados, but you can’t question the strength of his performance nor that of any of the other actors, all of whom play off Walker’s marvelous evocation of a woman trembling on middle-age spinsterhood who rolls the dice in the hope that life will allow her to walk away a winner. In the end, she does win, but not in the way she had hoped.

“Intimate Apparel” runs through Nov. 1. For tickets or more information call 203-227-4177 or go to www.westportplayhouse.org.
Posted by Geary Danihy at 1:46 PM