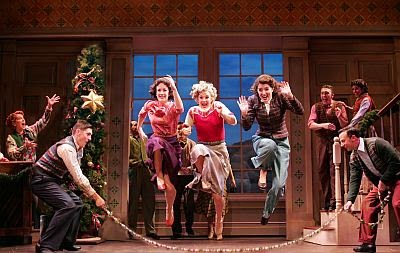 What a lovely dessert to serve for Michael Price’s going-away party. After 48 years, Price, executive director of Goodspeed Musicals, is moving on, leaving behind a legacy unmatched in – and national – theater. He is, without a doubt, the defining force behind all that Goodspeed has come to stand for, so it is fitting that the final production of his career at Goodspeed, “Irving Berlin’s Holiday Inn,” display the style, quality and talent that has drawn crowds to the venerable theater for decades.

As directed by Gordon Greenberg, who co-authored the book with Chad Hodge, and choreographed Denis Jones, “Holiday Inn” is a delightful evocation of the golden age of both Broadway and musicals. There’s singing, dancing and romancing and a light-hearted plot. As my play-going partner commented upon leaving Goodspeed that evening, you always come away feeling good, and that’s because Goodspeed under Price’s direction has never lost sight of its primary function, which is to present classic musical theater without any shrugs or winks. Basically, Goodpseed gives its audience what it wants, and that’s what keeps the folks coming back. 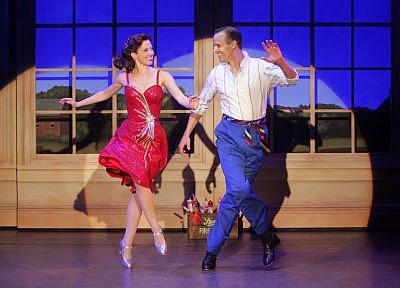 “Irving Berlin’s Holiday Inn” is a classic example of what Goodspeed is, well, so good at. There’s a raft of talented actors, a set, created by Anna Louizos, that explains why so many theater companies around the country with limited space seek our Goodspeed for advice, costumes (there has to be at least six or seven major costume changes for the cast over the course of the evening) by Alejo Vietti that dazzle, and dance numbers choreographed by the aforementioned Jones that seem both spontaneous and studied (in this case, a close study of some of Fred Astaire’s memorable numbers).

The plot doesn’t require much of a synopsis. Jim Hardy (Tally Sessions), Ted Hanover (Noah Racey) and Lila (Hayley Podschun) have a song and dance act. Jim and Lila are engaged, but Ted lures her away with dreams of glory. Seeking solace in the simpler life, Jim, sight-unseen, buys a farm in , the ancestral home of Linda Mason (Patti Murin). 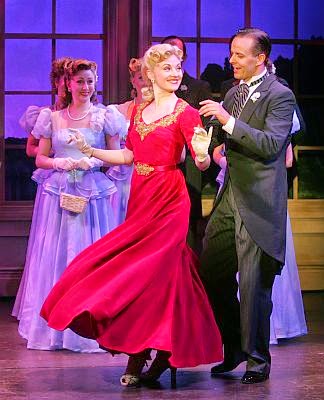 Jim soon realizes that the farm will not pay for itself, unless…why not turn it into an inn, an inn that puts on musical extravaganzas on all of the major holidays (What’s to be done for income the rest of the year? Don’t ask. It’s a musical!) With the help of Louise (Susan Mosher), the local handywoman and the musical’s comic relief, the inn is transformed, Linda, who once had acting aspirations, is induced to become involved, Jim and Linda start to have feelings for each other, Ted reappears, having been jilted by Lila, and goes into his ‘Hollywood dreams’ routine with Linda, she bites, Jim once again is despondent…oh, will true love eventually win out? Yes, you’ve seen variations on these time-worn themes many times before, but they work, and they work admirably at Goodspeed. If you’re yearning for “The Cherry Orchard” or “A Doll’s House,” go elsewhere. The plot is the all-purpose flour and yeast that help make the cake; the songs (a pastiche of classic Irving Berlin songs) and the dance routines are the luscious fillings that make this particular dessert so delightful. 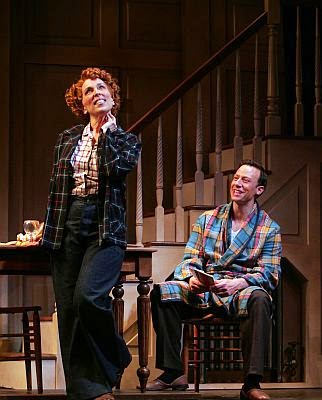 Susan Mosher as Louise and
Tally Sessions as Jim Hardy

The songs? Yes, of course, there’s “White Christmas,” that paean to a time and a holiday that exists primarily in American myth (and perhaps, for a certain age group, brings on suicidal thoughts around holiday-time), but there’s also “Out With My Baby,” “Blue Skies,” “What’ll I Do?,” “You’re Easy to Dance With” and “Be Careful, it’s My Heart.” And then there’s “Shaking the Blues Away,” perhaps not one of Berlin’s most memorable songs but it becomes a show-stopper with Jones’s choreography that, most notably, involves three dancers jump-roping with a long length of garland. This number epitomizes what Goodpseed is all about – it’s innovative and exuberant.

The show’s penultimate number, “Let’s Take an Old-Fashioned Walk,” perhaps says more than it is meant to, for that is what Price has focused on over his 46 years at Goodspeed, an old-fashioned walk down the memory lane that is American musical theater, and he’s brought us along, and for that, if for nothing else, we can be ever grateful. Thank you, Michael, for all of those walks.

“Irving Berlin’s Holiday Inn” has been extended through Dec. 21. For tickets or more information call 860.873.8668 or visit: www.goodspeed.org.
Posted by Geary Danihy at 6:32 PM