A Compelling “Angels in America” 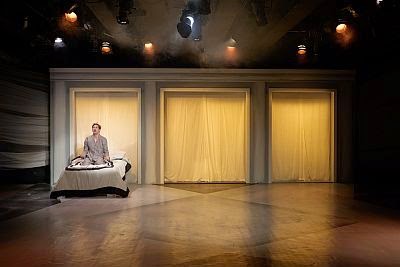 James Parenti as Prior Walter, All photos by Rich Wagner


“Angels in ” has stirred controversy since it opened on Broadway in 1993, said controversy not abating and perhaps aggravated by its receiving the Drama Desk Award for Best Play, plus a Pulitzer and a Tony in the same year. Subtitled “A Gay Fantasia on National Themes,” Tony Kushner’s two-part exploration of (some would say exploitation of) such diverse themes as AIDS, homosexuality, political corruption, religion, anti-semitism and racism woven together with the more intimate subjects of love, friendship and betrayal cannot help but elicit diverse responses from anyone who sees the play, responses that range from shock through boredom to enthrallment. That Playhouse on Park in West Hartford has chosen to open its sixth season with a production of the first part of the play, “Millennium Approaches,” redounds to its credit, and the fact that the effort is, by and large, accomplished with style, flair and a keen sense of the play’s overt theatricality says much about the quality of work to which this theater is committed. 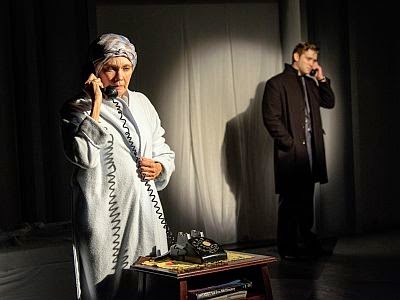 Directed by Sean Harris, the Playhouse’s artistic director, with a set designed by Chris Hoyt, lighting by Aaron Hochheiser and sound by Joel Abbott, the production, given the intimacy of the theater, compels attention from its opening moments. Written for eight actors, many of whom take on multiple parts unrestricted by gender, the play is not without its critics, some of whom have suggested that it is overwrought, overwritten and two long by half (three and a half hours with two intermissions) and that anyone who expresses these or other negative opinions is immediately labeled a homophobe, that only politically incorrect cads would carp or complain. It’s that kind of play – its value and impact are in the eyes of the beholders. 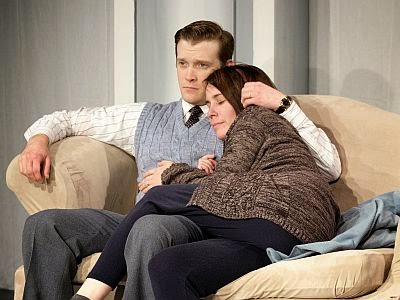 The loose, segmented plot focuses on two sets of characters. There’s Prior Walter (James Parenti), a young man with an ancient family history who has just contracted AIDS, and his significant other, Louis Ironson (Marty Scanlon), who is challenged by the prospect of having to care for his lover and  eventually abandons him. Then there are the Pitts: Joe (Tim Hackney), a devout Mormon and deeply closeted homosexual who is a clerk for the U.S. Court of Appeals and a close friend of Roy Cohn (Jim Shankman), the famous (or infamous) lawyer, and Joe’s wife, Harper (Kristen Harlow), a lady deep into Valium addiction who lives most of her days in drug-induced fantasies, often visited by Mr. Lies (Clark Beasley Jr.), a member of the International Order of Travel Agents who facilitates Harper’s flights of fancy. 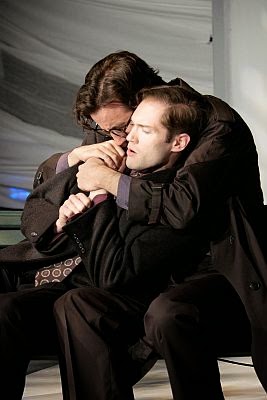 Intermixed and interacting with these main characters is a host of minor characters including Rabbi Isidor Chemelwitz, Henry, Cohn’s doctor, Hannah Porter Pitt, Joe’s mother, and Ethel Rosenberg, all played by Rae C. Wright, several long-deceased members of the Walter family, played by Shankman and Hackney, and Emily, a nurse, Ella Chapter, friend of Hannah, a derelict woman and, finally the Angel, all played by Olivia Hoffman. As one might imagine, the number of costume and character changes are demanding on the actors, as are the monologues that most of the characters are asked to deliver (special note must be taken of Scanlon’s extended diatribe to Belize [Beasley], delivered with a manic rapidity that is nothing short of awe-inspiring).

The Playhouse has, as it did for its last production of “Spelling Bee,” managed to gather together an impressive ensemble of actors. There’s really not a false note throughout the entire evening, and there are moments of such intensity you want to drop your eyes – but you can’t. Singling out specific performances is therefore difficult, but special credit has to be given to Parenti, who gives us a witty, frightened, bedeviled (or be-angeled) Prior Walter, a man confronting his own humanity, his past and his lover’s betrayal. It’s a simply marvelous, multi-faceted performance. 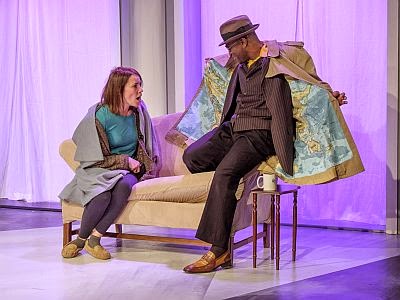 Then there’s as the Valium-popping wife who is capable of being distraught and delightfully self-aware at the same time – it’s a deft trick pulled off by an actress who knows what she is doing at every moment. Finally, there’s Shankman as Ray Cohn, who is able to create a wonderfully nuanced character who seeks to hide his fears and fragility with brash bravado and disdain for the rules and laws followed by mere mortals, a portrayal that is both chilling and compelling.

Director Harris shows a firm, understanding hand throughout, no more so than in the scene in which Prior challenges Louis about his betrayal as Harper confronts Joe about his homosexuality – it’s a visual piece of contrapuntal theater that, as blocked by Harris, makes the heart race and the senses tingle. It ends and you feel exuberantly exhausted.

“Angels in ” is not for everyone. On opening night several audience members departed during the first and second intermissions. Perhaps some were put off by the graphic representation of the suffering those afflicted by AIDS go through; perhaps others were disenchanted by the somewhat overt scenes of homosexual love (or lust – or despair – or self-effacement and self-denigration). This is a tough play that demands the audience enter into a world that is both gritty and real and phantasmagorical, but for those who stay the course, it is ultimately tremendously satisfying if not (at least in Part One) uplifting. And as for the acting? Well, those aspiring to eventually trod the boards should attend and make mental notes. All they have to do is focus on just one of these eight talented actors and watch…and learn…and be inspired.

And to think all of this is happening in a relatively tiny theater in . Will wonders (including the reveal of the angel in the play’s final moments) never cease?