The Painter and the Physicist 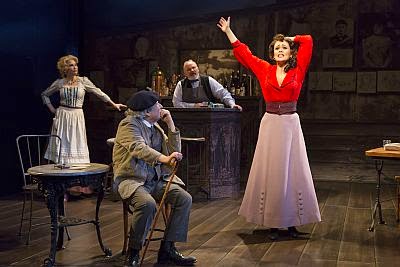 
So it’s 1904. We’re on the cusp of a new century, 100 years that stretch out like a road paved in silver, glistening, beckoning, and two young men stand staring down this road, wondering where it will lead them. Both men believe that greatness awaits, for they are full of themselves, of the achievements that tremble before them in their minds, the ideas that swirl. One is a painter, a hedonist, the other a physicist and, as the old joke goes, they walk into a bar one evening, the Lapin Agile, to be precise, a bistro. The punch line to this particular joke is bathed in dramatic irony, for the painter is Picasso, the physicist Einstein, and the audience watching Steve Martin’s “Picasso at the Lapin Agile,” which recently opened at Long Wharf Theatre, knows exactly where these two men are headed, what they will achieve, and what will happen once they begin walking down that road, the discoveries and creative insights that will change the world forever, and the darkness that will, at certain moments, threaten to lead to the abyss.

Yet, this is a comedy, but comedy and tragedy are familiar bedfellows, and both Martin and director Gordon Edelstein know this, so there are many laughs during the evening, but the humor is, at times, bittersweet, no more so than when the characters rise up to prophesy about what the future will bring and one of them suggests a bright future for the city of Hiroshima. Indeed, it will be bright, a death-delivering brightness created in no small part by the young Einstein.\ 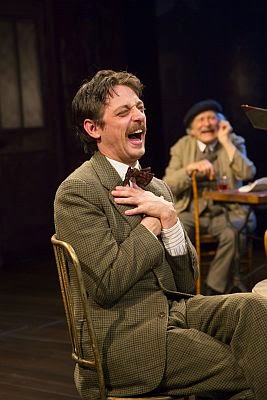 The evening opens with the bistro’s owner, Freddy (Tom Riis Farrell -- is there any self-respecting Frenchman named Freddy?), dusting off tables and setting up chairs. He is soon joined by his first patron, Gaston (David Marguilies) , arriving in an uncommonly happy mood. Gaston immediately establishes that he has problems with his waterworks (it will be a running joke), and then Albert Einstein appears – too early. It’s one of the in-jokes that will, over the evening, break the fourth wall, because the character of Einstein is listed fourth in the program (which doesn’t say: “In order of appearance,” but, whatever). Freddy points out the young physicist’s mistake (by grabbing a program from one of the audience members), Einstein dashes off and Germaine (Penny Balfour), Freddy’s wife, appears to help him set up for the evening. 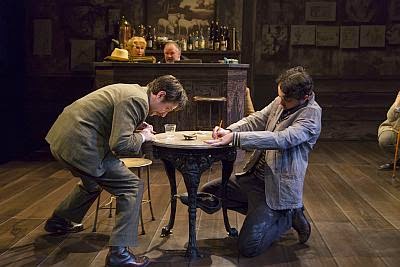 Grayson DeJesus (Picasso) and Robbie Tann (Einstein) in a draw-off

Soon Einstein is back (with one movement, Tann makes his character recognizable), immediately followed by Suzanne (Dina Shihabi), who makes a “stunning” appearance as she awaits the arrival of Picasso, whom she has slept with twice and hopes to repeat the performance.

Much of the early part of this one-act play is given over to Suzanne, who relates her initial meeting with Picasso and , in the process, outlines his character as well as establishes themes relating to creativity and time that will be touched upon again and again throughout the evening. The group will soon be joined by Sagot (Ronald Guttman), an art entrepreneur, Picasso himself (a brooding Grayson DeJesus), a sharp-talking huckster named Charles Dabernow Schmendiman (Jonathan Spivey), a haughty countess and a smitten schoolgirl (both played by Shihabi), and finally, a character listed in the program only as A Visitor (Jake Silbermann), a stranger instantly recognized by the audience. 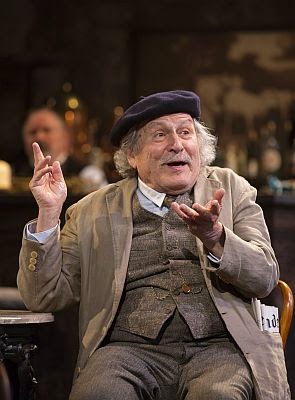 Once both Einstein and Picasso are on stage, an argument between art and science ensues, with many allusions to the artist’s (future) work and the physicist’s (future) discoveries. In essence, it is an argument about time and ideas, for Picasso believes that the moment of creation is a merging of thought and action – if they can become instantaneous than what follows will be a work of genius. For Einstein, of course, time is relative, is a matter of perspective. The two finally find common ground and end embracing each other as fellow seers who have both seen and will craft the future.

Oddly enough, though the play’s emphasis is on the two famous men, it is, sadly, Schmendiman and the Visitor who best capture what the future will be like, a mixture of hype and crass commercialism that will make the beautiful tawdry and the ingenious menacingly mundane. For all of the laughter, the play’s final message is captured when all the characters rise to toast the future – most offer glowing predictions, with the Visitor adding a touch of melancholy with his: “…and regret.” Martin’s final, witty mind-tickler is to have the Visitor, at the play’s closing, stare up into the heavens and ponder the wonder that a play fits neatly into the exact time frame between when the lights come up and the lights fade – which can, of course, apply to the span of a person’s life.

Edelstein directs this mélange of comedy and petite pathos with a sure hand, although there are certain scenes that could be best served by cutting some air out of the dialogue – often when there should be a tumble, a collision of words, there are pregnant pauses that retard a scene’s forward motion. For the most part, however, the actors create the mood and the comedic tension that the script demands, none more so than the cantankerous Marguilies, who serves as the comic antithesis to the theorizing of the two “geniuses,” the everyman who acknowledges that ideas are important but wishes to know which side his bread is buttered on. Kudos also to Spivey, who is the epitome of the infomercial salesman hawking his specious wares, and Shihabi (tasked with multiple costume and persona changes), who, as Suzanne, delightfully captures the nature of the sensuous female who, when confronted with reality, has an eye towards profit.

In “Picasso…,” Martin deals with serious ideas wrapped in a candy-coating of his own special brand of skewed, somewhat hyper-kinetic humor. It is to the credit of both the cast and the creative team that both are captured in this production. You come away with a smile and then as you drive home you start to think and the smile fades as you remember that the Picasso who painted “Les Demoiselles d’Avignon” is also the Picasso who painted “.”