"Boyz" Jazz it Up for Jesus 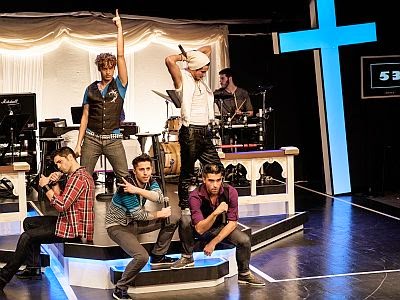 
Feel like being saved? Does your soul need a little dry cleaning? Do you want to feel the spirit move you? Well, if you’re craving to cavort with some Christians – Catholics, to be specific (except for one Jewish lad) – then get off your knees, praise the Lord and get thee up to Playhouse on Park in West Hartford, where “Altar Boyz,” with music and lyrics by Gary Adler and Michael Patrick Walker and a book by Kevin Del Aguila, is playing until Dec. 21.

This sprightly, tongue-in-cheek musical comedy doesn’t take religion, or much of anything else, too seriously. As directed by Kyle Brand, who also provides some groovin’, get-down-get-funky choreography, it’s 90 minutes of salvation on the sly as five altar boys entertain on the last night of their “Raise the Praise” tour.

When it first appeared in 2004, the show won the Outer Critics Circle Award for Best Off-Broadway Musical, and it’s easy to see why: it’s a tuneful and fast-paced send-up of boy bands that takes gentle pokes at organized religion -- “Church Rulez,” a snappy stand-up-sit-down-kneel number, captures the choreography imposed by the rite of the Catholic mass on the faithful, movement that used to be made to the sound of clickers in the hands of eagle-eyed nuns (ah, those were the days!). 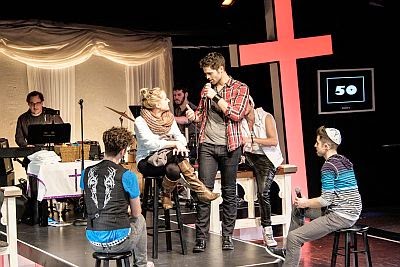 Mark G, Merritt sings "Something About You"
to a member of the audience

The five altar boys – Matthew (Mark G. Merritt), Mark (Brandon Beaver), Luke (Nick Bernardi), Juan (Greg Laucella) and Abraham (Adam Cassel), overseen and motivated by God (Brock Putnam) – work well together as they run through their numbers, interspersed with dialogue that sketches in their various characters. Matthew is the strong, silent type, much admired by Mark, who eventually comes out of the closet to finally admit that he is…Catholic (in “Epiphany,” one of the high points of the evening and a definite  crowd-pleaser). Luke, the bad-boy hophead of the quintet, has been in rehab for “exhaustion,” and Juan is a Mexican orphan searching for his parents. As for Abraham, well he just wandered into the church one day and, along with the others, was commanded by a deep baritone voice that spoke from a blinding light (compliments of lighting designer Christopher L. Jones) to go forth and spread the word, at least to a certain demographic that responds to rock, rap and funk.

There’s really not a dull moment for most of the evening – Juan’s despair at learning about his parents may drag on just a bit but is saved by the group’s rendition of “La Vida Eternal” (a take-off on Ricky Martin’s “Livin’ la Vida Loco’), and the grand revelation of perfidy amongst the five lads that leads into the finale (the somewhat saccharine “I Believe”) is a bit too-message driven – but for the most part things move along apace. There are audience sins revealed…and purged, a young lady from the audience is brought down to the stage by Matthew for the opening number of the second act (“Something About You”) and the devil is cast out (a la in the “The Exorcist”) in “Number 918.”\ 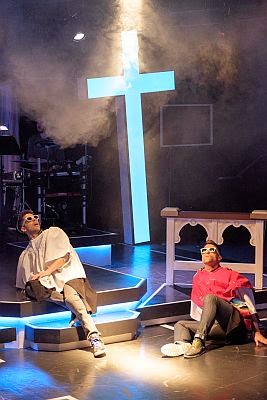 "Luke" and "Matthew" hear the word of God

Backed by a quartet of Robert James Tomasulo and Luke McGinnis on keyboard, Benjamin Tint on guitar and Eric Hallenbeck handling drums and percussion, the five altar boys cavort, writhe, sing and dance, all while bathed in the pulsing light of two large crosses set stage left and right by scenic designer Christopher Hoyt. The hour-and-a-half seems to fly by as the five talented actors praise the Lord and pass the innuendos.