[War] a Drama-Lite Exercise in ideas 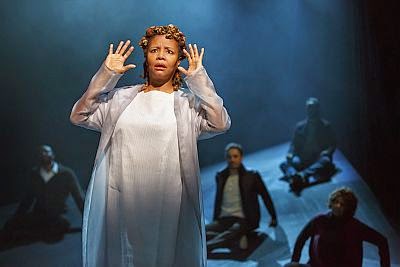 Tonya Pinkins (foreground) in War. All photos by Joan Marcus.

[WAR}, a new play by Branden Jacobs-Jenkins that is having its world premiere at the Yale Repertory Theatre, starts out as a surreal trip inside the mind of a woman who has recently suffered a stroke, a trip to the Planet of the Apes, if you will, and ends up with a jaunt down Main Street in Disneyland to the tune of “It’s a Small World After All.” As directed by Lileana Blain-Cruz, this “family” drama is an exercise in dabbling in themes without fully developing any one of them, dipping one’s toes in many streams but never getting baptized. As such, the classic arc of rising action, climax and falling action is here more a case of several seismic pulses interspersed with back story that leads to an extended Hallmark card exposition (in German, no less) about motherhood and family that brings many of the characters to tears but left at least one member of the audience dry-eyed and wondering where the nearest watering hole might be found.

The play opens on a spare stage: there are two white walls set at a radical angle and two chairs. The lights dim, then come up and the cast ambles out onto the stage and proceeds to start laughing. It gets louder, more raucous. What are they laughing about? What do they know that we, the audience, doesn’t? That tickets have been purchased? No that’s not it. It’s probably they understand we’ve been waiting for Godot for decades and he still hasn’t shown – and won’t show tonight.

The cast exits, still chuckling, and Roberta (Tonya Pinkins) appears. She is having an out-of-body experience guided by Alpha (Tyrone Mitchell Henderson), a simian of sorts, backed by a Greek chorus of apes (the rest of the cast, now no longer laughing but still making a hell of a noise). Roberta is having a difficult time remembering anything, but Alpha, communicating with her via guttural sounds and sign language, translated by projected dialogue, is being patient as Roberta stares out at the audience, wondering who all of these people are (turns out, I think, that we’re the dead). 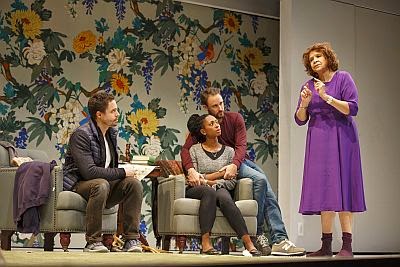 The lights come up, a bed is rolled in and we are now in an intensive care unit, where Roberta is in a coma. Her daughter, Joanne (Rachel Holmes) is by her side as her brother, Tate (Donte Bonner) enters with an attitude, eventually explained by the fact that he’s a Harvard grad.

Why is Roberta coma-communing with apes? Well, the symbolism here is pretty heavy, because we (including the audience) are all apes, all related, but there’s more, because Roberta’s father, a black man, was a G.I. in World War II and apparently when, once the war was won and American troops were stationed in German towns, the German citizens would make ape sounds when they saw black soldiers, but there’s more, because Roberta had her stroke when she was visiting a zoo with her half-sister, Elfriede (Trezana Beverley), the child her father sired while he was in Germany. Elfriede is a mischlingkinder, that is, a child born of a German woman and an African American soldier. 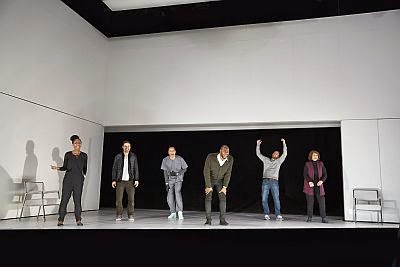 So Roberta is somewhere between life and death, having a conversation with Alpha, while her son and daughter snipe at each other at her bedside as they try to figure out who the hell Elfriede is (they, of course, did not know about the war-time liaison) and try to deal with Elfriede’s manic son, Tobias (Phillipe Bowgen), while the nurse (also Henderson – why do all male nurses in plays have to be ostentatiously gay?) tries to calm everyone down. Got it?

We’re into soap opera territory here, and it only gets worse, for in the second act, staged in Roberta’s apartment (she obviously has horrible taste in wallpaper, or perhaps scenic designer Mariana Sanchez Hernadez wanted to emphasize the “ape” metaphor by creating a jungle motif), Tate and Joanne’s husband, Malcolm (Greg Keller), who happens to be white, have an extended argument about the term “African-American,” to what dramatic purpose remains to be seen, but the playwright apparently needed to get this off his chest. Then Elfriede appears with Roberta’s clothes – she was apparently a nurse in a hospice back in – trying to find the right outfit for Roberta to be buried in – BUT – Roberta isn’t dead, or is she? Apparently Elfriede knows a goner when she sees one. 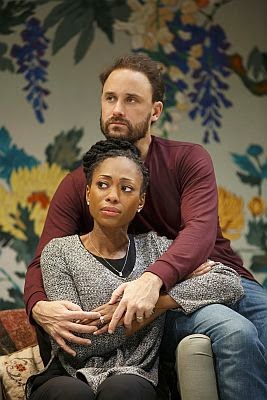 Tobias throws a hissy fit that apparently deals with a hereditary disease his mother is suffering from (it’s sins of the father stuff) but is calmed by his mother, who has written a letter (when, exactly, she had the time to write this extended letter is not explained) that she proceeds to read, in German, with her son translating. It’s a four-page letter! It goes on and on. If there was any dramatic tension in the play it is totally defused with the reading of this missive. Then we have familial reconciliation, we come back to it’s a small ape world after all with the extended family members staring out at the audience (we’re not dead anymore, we’re back to being apes), and then curtain, with a final grunt from Alpha.

A harsher critic might call the proceedings pretentious claptrap, but there’s a real play hiding amidst the dramatic flotsam and jetsam up there on the stage, a play in serious need of work-shopping and a stern editor who demands development, coherence and internal logic. As it stands, the play offers us characters who are, by and large, stereotypes, vehicles that allow Jacobs-Jenkins to say his piece, or pieces. The playwright has a lot of ideas, and many of them are intriguing, but the ideas have to be infused into the flesh of the characters rather than hung on them like sandwich boards.