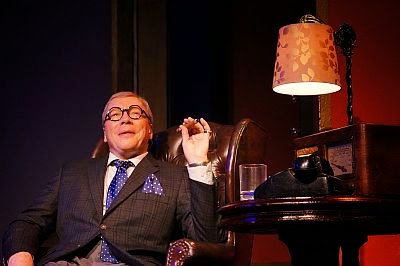 
As you sit watching “Say Goodnight, Gracie,” which recently opened at the Ivoryton Playhouse, a question slowly arises: must you be of a certain age to truly enjoy this one-character, one-act play? The answer is yes…and no, for “Gracie” is as much a love story as it is a trip down . It is also a quintessential American story that embodies the spirit of the Horatio Alger novels: a young lad of low beginnings, through luck and pluck, makes his way in the world and becomes a success.

Who is Gracie? Well, that’s part of the generational conundrum that is at the heart of embracing the play and appreciating R. Bruce Connelly’s performance, for Gracie is Gracie Allen, the ditzier part of the Burns and Allen comedy team that made it big in vaudeville, then on radio, in movies and finally on television, a career that spanned multiple decades.

And who is the man up there on the stage reminiscing? Well, it’s the other half of the team, George Burns. So, who’s George Burns? There’s the rub, because if you know who George and Gracie are then you’re into the play from the moment Connelly walks out onto the stage, cigar in hand, and has a conversation with God (whom he played in three movies – turns out God and George are big fans of each other). If you’re clueless, well, it will take some time for the play, written by Rupert Holmes and directed by Michael McDermott, to bring you up to speed…and you may never get to full open throttle. Hence, depending on when you arrived on this planet, you may well have a different experience watching “Gracie.”

Since I arrived six-plus decades ago, I had no problem relating to and appreciating Connelly’s take on the iconic comedian. Connelly has the mannerisms – the pensive, somewhat perplexed pauses, the open-mouthed smile – down pat, as well as the somewhat gravelly drawl with which he delivers his lines. He also does a great Jack Benny – ah, who’s Jack Benny and what’s the deal with the violin? Again, another Checkpoint Charlie that either lets you into the play or keeps you out – Ah, what’s Checkpoint Charlie? Stop it. You’re making me feel my age.

The frame for the play is that Burns has just passed and now finds himself before the Pearly Gates. However, before he can enter and be united with his beloved Gracie, he is asked by God to audition. Audition? Yes. How? By telling the story of his life…and we time-travel back to the tenements of turn-of-the-century .

What follows is oral autobiography, as Connelly weaves a tale of a young Jewish boy who sells papers and ice to help his family make tattered ends meet, a boy who begins singing with three other Jewish lads and soon comes to realize that there might be money to be made by entertaining people.

Then it’s on to vaudeville, with the young Jewish boy taking on many roles (and names, most of them Irish) and finding limited success until he happens on a wisp of an Irish lass named Gracie. He suggests that they form a team. She hesitantly agrees. They rehearse and then try out their act, with Gracie delivering the straight lines and George following with the zingers. Only problem is, Gracie’s straight lines get more laughs than George’s comedic rejoinders. George, a savvy veteran of the vaudeville circuit, realizes that a change needs to be made in the act if the team is going to survive: the audience loves Gracie, and she’s getting the laughs, so…he becomes the straight man and Gracie, well, Gracie blossoms in all of her character’s ditziness. It’s a formula that will take them to stardom and last for decades.

Oddly enough, the play’s pacing mirrors the graph of Burns’ career, for things start to drag a bit as Connelly relates, perhaps with greater detail than necessary, the ups (few) and downs (many) of Burns’ vaudevillian efforts, but Gracie saves the day, for although there is no actress playing her, there are stills of her projected onto a screen (later, clips from the films they made and then from their television show), and then there’s her voice, high-pitched, somewhat scratchy, with every line she delivers seeming to end with a question mark, as if she herself is unsure of what she is saying. From the moment Gracie “appears,” the show takes on a new life, and it’s to Connelly’s and Holmes’ credit that Gracie is given her due. There’s an especially lovely moment, soon after Burns realigns the act and makes himself the foil to Gracie’s zaniness, when Connelly sits in a chair as we hear Gracie prattle on, her illogical statements making a weird sort of sense. With each line that Gracie delivers, Connelly turns towards the audience and smiles – he doesn’t have to say it, but we know he’s thinking, “That’s my Gracie.”

I wish I had had one of my grandsons with me during opening night, not only for his company but to ask him on the drive home what his take was on the show. He would not have recognized the theme from George and Gracie’s television show, he probably wouldn’t know who Eddie Cantor, Jimmy Durante or Fanny Brice were, but that’s okay. What I would have wanted to know is if he had gotten what the play was about. Did he see that, beyond show business, beyond fame and fortune, what’s important is the magical intermingling of two lives, an intermingling that was played out for all of to see. Was he moved when George visits Gracie’s grave every week just to talk with her and keep her updated on what is happening in his life? Did the final moment of the play perhaps bring a tear to his eye, when Gracie tells George that he, himself, should say goodnight? I can only hope that he would have answered in the affirmative.