Law of the Jungle Surfaces in Suburbia 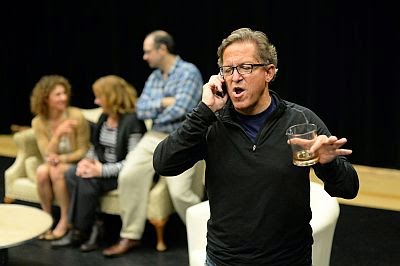 
Who trusted God was love indeed
And love Creation's final law
Tho' Nature, red in tooth and claw
With ravine, shriek'd against his creed

If Tennyson had had the opportunity to see Yasmina Reza’s award-winning “God of Carnage,” which recently opened at the Darien Arts Center Stage under the capable direction of Mark Graham, he might have considered revising his poem, for as Reza would have it, underneath all that love and civilization lurks the beast, the worshipper of the god of carnage, who needs little provocation to bare his, or her, fangs and claws.

Billed as “A Comedy of Manners…without the Manners,” “God of Carnage,” translated by Christopher Hampton, presents two oh so civilized couples whose children, two sons, have had a schoolyard fight. Benjamin, son of Annette and Alan Raleigh (Jessie Gilbert and Lawrence Reina), apparently took a stick to Henry, son of Michael and Veronica Novak (Gary Betsworth and Eileen Lawless), giving the lad a puffed lip and damaging two teeth. The Novaks have invited the over to discuss the matter as mature adults, because mature adults can work things out in a calm, logical, sophisticated manner…Not!

What begins as a politically correct discussion of the schoolyard altercation soon devolves into a visceral autopsy of the two couples’ lives, with recriminations and insults flying as fast and deadly as arrows at . Reza takes delight in scraping away at the two couples’ veneer of suburban sang froid, but she goes deeper as the play questions humanity’s true nature, suggesting that we really haven’t distanced ourselves from the club-wielding Neanderthals.

Much of the play’s humor is to be found in the peeling away of the four adults’ surface personas to reveal the feral, frightened children that huddle beneath, with the operative irony being that the catalyst for the adult confrontation is…kids getting into a fight.

The danger in choosing to board Reza’s play is that her four characters border on caricature. Thus it falls to the actors, and the director, to ensure that what the audience sees on the stage are flesh and blood humans rather than cardboard cutouts. This task the four actors in the DAC production accomplish, by and large, with skill. As in most relationships there will be an alpha and a beta – in the case of these two couples, the alphas are Alan, a lawyer for a pharmaceutical company, and Veronica, an author and champion of human rights. Reina nails the amoral lawyer, giving us a man surgically attached to his cell phone who, throughout the evening, continues to take calls dealing with a pending scandal about one of the company’s drugs. His advice embraces lying and across-the-board denial.

Given the nature of alphas, Alan and Veronica immediately antagonize each other, and Lawless plays well off Reina’s work-obsessed character, creating a woman who is just this side of self-righteous, who wraps her opinions and sense of self in the flag of suffering humanity.

The two betas are Michael and Annette. Betsworth sometimes takes his character’s submissive nature just a bit too far, but his eruption over the death of a hamster (don’t ask) is priceless. It is, however, Gilbert who gives us the most nuanced performance of the evening, transforming her character from a somewhat put upon adjunct to her husband’s life into a tigress defending her young while literally dousing her husband’s cell-phone ardor.

The single set by David Eger is functional but somewhat linear, which Graham initially seems to succumb to in the opening scenes as he aligns his characters stage right to left and then leaves them there, standing behind a table, delivering their lines. Perhaps the blocking here is meant to convey the couples’ initial awkwardness, but it’s just a bit too static. However, Graham soon has his actors using the full (limited) stage area, wisely rearranging the two couples as alliances form and dissolve and allegiances are challenged – it’s a visual enhancement of the ebb and flow of the couples’ changing relationships and the power shifts that occur during the one-act play.

Inevitably, the meeting over a schoolyard fight leads to violence, which provides a catharsis of sorts, and concludes with the four adults emotionally drained, left to contemplate the damage they have wrought, the truths that have been revealed, and to face the uncomfortable question uttered by Michael in the play’s final line: “What do we know?”

This tidy, often trenchant production has many humorous moments, but the laughter is tinged with a certain amount of discomfort for it doesn’t take long to realize that what we are laughing at are our own foibles, shibboleths, hypocrisies and neatly constructed “civilized” personas.