A Wise and Witty "Walk in the Woods" 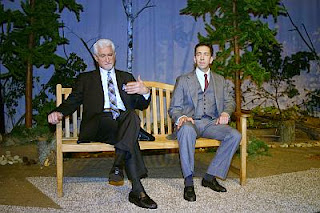 
In a theater on in , two men sit on a bench…and talk.

That might be the synopsis of Lee Blessings play, “A Walk in the Woods,” as written by a bored high school freshman born well after the demise of the Cold War. And he would be right -- it is a play about two men who sit on a bench in the woods and talk – but this freshman, a bit obtuse and eager to get back to playing “Call of Duty,” would perhaps miss the point of the conversations these two men are having, for inherent in what they touch upon, both directly and obliquely, is both the essence of recent history and, more important, the essence of man’s eternal search for a way to end conflict, an uneasy exercise, fraught with distrust, in finding a formula that might just lead to a tentative setting aside of shields and swords,

As capably directed by Square One Theatre Company’s artistic director Tom Holehan, “A Walk in the Woods,” which was nominated for a Tony award and a Pulitzer Prize when it first appeared in 1988, is invested not only with a sense of the recent historical past but also, in this production, with just a bit of nostalgia, for Pat Leo, who plays the Russian diplomat Andrey Botvinnik, has appeared in this play once before at Square One. He did so 25 years ago, for “A Walk in the Woods” was the first play Square One boarded, and Leo played the role of John Honeyman, the young American negotiator, played in this production by Damian Long, who is making his Square One debut.

The play is set in the woods outside of Geneva, the city where Soviet and American diplomats are trying to hammer out an arms limitation treaty that might just nudge the world several inches back from the abyss of Armageddon. The talks are not going well, for there is distrust and hidden agendas on both sides, but in the woods two of the negotiators meet on a regular basis to see if some common ground can be found. Botvinnik, the Russian, has a wry sense of humor, is sophisticated and a master at the give and take of diplomacy, but as ably portrayed by Leo, he is also jaded, cynical and holds out little hope for the success of the negotiations.

Botvinnik’s counterpart, Honeyman, is new to the negotiation game, and although the American is eager to bring the negotiations to a successful conclusion, he is naïve and just a bit stiff and pompous.

There are actually two sets of negotiations going on in this play: the stated one dealing with arms reduction, which the audience hears about but never sees, and the more inter-personal negotiations between two human beings learning how to talk to each other and, if possible, become friends. Thus, Leo and Long are charged with creating an atmosphere that, on the personal level, mirrors the hesitancy and distrust that exists at the negotiating table in . This they do quite admirably, for over the course of the two-act play each character slowly sheds his status as negotiator and simply becomes a person seeking to understand another person, which is obviously at the heart of playwright Blessing’s message, for if we cannot understand and reach accord as fellow members of the human race, then we will forever be ruled by nationalism and the false pride engendered by our proclaimed “differences.”

It may sound as if the play’s content is weighted down by socio-political theory, but that is not the case. Although the play deals with weighty subjects and touches on the disparate, perhaps intransigent, nature of the two political systems these men represent, the growing relationship between the men, separated as they are by culture and decades, is the play’s focus, and is presented with a great deal of humor, as established in the opening scene when Honeyman is eager to get down to brass tacks and, in response, Botvinnik suggests that they talk about…nothing…trivia…anything but the topics that are on the table back in Geneva. Over the course of the play, the two men, believably brought to full life by Leo and Long, find a tentative common ground where the cynicism of age and the idealism of youth can coexist, and, in the process, may just also find a way to “prevent the total destruction of every living thing on this planet.”