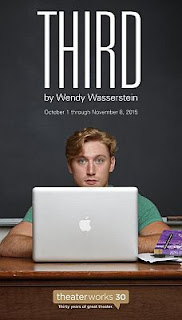 TheaterWorks has chosen to open its 30th season with a production of Wendy Wasserstein’s final play, Third, and it is a wise choice. As a matter of fact, theatrical wisdom is abundant in this production, from the acting to the directing, staging and lighting design. It’s smart, engaging theater and bodes well for the continued success of the venue.

Directed by Rob Ruggiero, TheaterWorks artistic director, Third is set in the hermetic environment of an elite liberal arts college, an institution that Professor Laurie Jameson (Kate Levy) has, over her two-plus decades of tenure, helped to transform from hide-bound and paternalistic to liberal and multi-culturally sensitive. Into this environment, and into Jameson’s class, comes Woodson Bull, III (Conor Hamill), the “Third” of the title. He is a graduate of Groton, but he is an athlete, a wrestler, and when he turns in a paper on King Lear that seems too good (read “too intelligent for a jock”) to be true, Jameson accuses him of plagiarism. The charge leads to the student’s academic suspension until he is found not guilty of the charges.

Jameson is a committed, determined woman – this is her strength and also her weakness, for although she has had a major impact on the institution where she teaches, she has become, over the years, as rigid and hide-bound in her own way as those she challenged, in the process alienating friends and family. She has allowed herself to be defined by the causes she has championed, but life, in the form of a colleague, Nancy (Andrea Gallo) battling cancer, her daughter, Emily (Olivia Hoffman), a Swarthmore student struggling to become her own person, and Jack (Edmond Genest), her father, who is slowly sliding into dementia, demands that she must eventually reevaluate who she is, what she believes and what she has allowed herself to become. The process provides the emotional arc of the play, and if it becomes somewhat forced, this doesn’t take away from the enjoyment of watching this fine cast bring to vivid life their characters.

Levy, the recipient of the Connecticut Critics Circle 2014 Outstanding Actress award, turns in another stellar performance. She gives us a woman made of brittle steel, confident in her beliefs yet blind to the emotional needs of others and her own frailty. The strength of her performance is best captured in a scene in which Jameson visits her psychiatrist (unseen). Reclining in “the chair,” she exhibits a broad range of emotions and reveals a woman in conflict with herself. It’s a riveting moment.

Hamill, a recent graduate who once interned at TheaterWorks, often seems somewhat stiff, as if he is standing at attention to deliver his lines. However, he also has his emotionally compelling moments, especially in a scene with Hoffman set in a bar where Third bartends. In a nice piece of dramatic irony, Third goes off on the “bitch professor who almost ruined his life, not knowing that he is speaking to the professor’s daughter. Hoffman, who is given many great one-liners to deliver, creates a believable portrait of a young woman in controlled rebellion who labors to emerge from her mother’s shadow. This effort is compellingly captured in a scene that immediately follows the bar scene, when Emily returns home to find her mother, wrapped in a blanket, watching a 60s musical retrospective. The generational clash is painfully realized by the two actors.

Rounding out the cast, Gallo, as , provides a necessary counterbalance to Jameson’s “take no prisoners” approach to life. Faced with the reality of her own mortality, she urges moderation in all things, including Jameson’s pursuit of Third. In a touching scene near the end of the play, Gallo offers us a woman who has been given a new lease on life and is determined to make the most of it. Her delight in finding that she has fallen in love (both with life and a man) is palpable.

Third and Emily are both emerging from the cocoons they have been swathed in and are eager to fly; Jameson and Nancy are, each in their own way, struggling with mid-life crises and are of unsure of which way to fly; Jack has fallen to the ground and flutters helplessly. Genest, in a truly touching performance, creates a man lost in his own mind. In the scenes he plays with Levy and Hoffman, Genest brings to life a man who is desperately clinging to shreds of reality, who is proud that he can count back from 100, even though he loses his way long before he can get to 80.

In scene after scene, you can see the cast members feeding off each other to create powerful vignettes that reveal their characters’ emotions and motivations. If there are any reservations about Third, it is in Jameson’s epiphany and “rebirth,” which comes rather too abruptly at the end of the play and seems, if not out of character, at least dramatically unearned. It almost feels as if a scene or two is missing, scenes that would justify Jameson’s visit to Third’s dorm room. In perhaps the play’s only false moment, Jameson “knights” Third before she departs – it’s simply not believable.

Closing scene aside, Third is good theater and can be appreciated on several levels, including the artful, turntable set designed by Michael Schweikhardt and the subtle lighting created by John Lasiter that evokes the changing seasons (although there is a moment early in the second act when you wonder if TheaterWorks is experiencing power problems as the lights dim and rise – it’s an attempt to suggest TV’s successive electronic moments, but it is visually disruptive and unnecessary).

Levy and company, under Ruggiero’s astute direction, deliver an enjoyable, often engrossing two hours of theater. If you are left with questions, they can be put aside. Third may ultimately devolve into mushy emotionalism, but until it does it is often taut, testy and dead-on.

Third runs through November 8. For tickets or more information call 860-527-7838 or go to www.theaterworkshartford.org
Posted by Geary Danihy at 6:25 AM