Tuesdays with Morrie -- Playhouse on Park -- Through Oct 18

Sometimes, less is more. Such is the case with Playhouse on Park’s Tuesdays with Morrie, a gentle, touching play that inexorably works its way into your heart. Sensitively directed by Sasha Bratt, this adaptation of the memoir by Mitch Albom eschews flash and spectacle to focus on a relationship between two men, a teacher and a former student, that deals with the issues of death and, more importantly, the issues of a life well lived.

Written by Albom and Jeffrey Hatcher, the play chronicles meetings between Mitch (Chris Richards) and Morrie (Gannon McHale), as Morrie slowly succumbs to Amyotrophic Lateral Sclerosis (Lou Gehrig’s Disease). The two first met at when Mitch took a sociology course taught by Morrie (the name, in Hebrew, relates to “my teacher’). Entranced and excited, Mitch eventually signed up for every course Morrie taught and, upon graduation, swore that he would keep in touch with “coach.”. He didn’t.

Sixteen years later, Mitch, who once dreamed of being a jazz pianist, is now a driven sports journalist who just happens to catch Morrie being interviewed by Ted Coppel on Nightline. Memories and guilt motivate Mitch to fly up to to visit Morrie. The first meeting is awkward, for Mitch has issues about dealing with those facing the ultimate journey, but Morrie, who understands, among other things, the healing power of touch (he dubs a kiss on the forehead “extra credit”), gets Mitch to commit to weekly visits on Tuesdays. 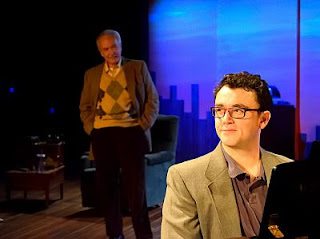 What follows is an exploration of friendship and shared humanity that, over the course of the one-act play, has the power to make you embrace all of the possibilities life has to offer, even as life comes to a close.

The set, designed by Christopher Hoyt, is simplicity itself: strips of parquet flooring angle out stage right, creating a saw-tooth design that is mirrored by the images on the back wall. The only furniture on-stage: two chairs and a book-laden table, plus a piano set extreme stage left. In the final moments of the play, a back wall opens and a bed slides forward: Morrie’s last resting place. The scene ends and the bed recedes into darkness bearing Morrie; it is a striking yet subtle evocation of the passage into the unknown, a stirring image, enhanced by Aaron Hochheiser’s lighting, that, opening night, evoked a palpable silence from the audience – you could feel those watching bidding Morrie adieu, perhaps with some tears.

This is an intimate play tailor-made for the venue, and Bratt has blocked scenes so that the emotions generated by the two actors can be felt by all, house left, right and center. And emotions there are aplenty. Richards gives a fine performance as a man conflicted, drawn to Morrie yet committed to the demands of a twenty-four-seven job. He has turned away from his heart’s desires and, in the process, lost part of his soul. This is best captured in a touching scene in which Mitch’s wife, a former singer, visits Morrie and sings for him (the wife is imagined). Morrie asks her to sing for him…and she does. At this moment, Mitch realizes that he has never really “heard” his wife, has never paused long enough in his hectic career to listen to the song of her life.

As impressive as Richards’ performance is, it is overshadowed, and rightly so, by McHale’s portrayal of Morrie. My play-going partner expressed it well when she commented: “What moved me most were not only the tears that the last scene brought
to my eyes, but also the impulse I had to get up out of my seat and help Morrie as
his struggle with the disease increased. I was physically drawn to comfort him
more than once.” Such is the power of McHale’s performance as he changes from a man eager to dance through life to one whose every movement creates pain. It’s a full, rich performance, made even more powerful by the theater’s physical intimacy.

Playhouse on Park is in its seventh year, and it continues to board productions that both move and, at times, astound. This is an organization that can tackle the boisterous, energy-filled demands of Hair and then stage an intimate, soul-searching production such as Tuesdays with Morrie. It’s a little theater with a big heart and a willingness to accept challenges. One can only wonder what surprises await when, at the end of this season, it stages. A Chorus Line. I can only hope that it will be a singular sensation.