Death Be Not Proud


“Holy Sonnet 14,” by the seventeenth century metaphysical poet John Donne, begins: “Batter my heart, three-personed God, for you / As yet but knock, breathe, shine, and seek to mend; / That I may rise, and stand, o’erthrow me, and bend / Your force to break, blow, burn, and make me new.” These lines could easily stand for the inspiration for Wit (often billed as W;t), the one-act, Pulitzer-winning play by Margaret Edson that recently opened at Playhouse on Park in West Hartford. An exercise in existential angst and physical agony, the drama takes the audience into the mind, and heart, of Professor Vivian Bearing (Elizabeth Lande), an expert on Donne’s poetry who, at the beginning of the play, has been diagnosed with cancer. Over the course of an hour and a half (which, at times, seems a bit longer), the imperious Bearing is overthrown, bent, burnt, almost broken and, in an epiphanic close, is made new. There’s both agony and ecstasy to experience in this exposition of the human journey towards the end of life.


In terms of plot, not much really happens, for after the diagnosis of ovarian cancer, Bearing, under the care of Dr. Harvey Kelekian (David Gautschy) and one of Bearing’s former students, Dr. Jason Posner (Tim Hackney), agrees to go through a series of experimental chemotherapeutic treatments involving a drug that is more a curse than a cure. As Bearing’s health deteriorates, there are a series of flashbacks that include her dawning fascination with words as a 5-year-old, her gestation as a Donne scholar under the demanding tutelage of Professor Ashford (Waltrudis Buck), and her somewhat stern and aloof handling of her own students.

Hovering over all of this is Donne’s poetry, oftentimes abstruse lines (some of which are projected onto side and center screens) that seem to hide the poet’s humanity behind a wall of metaphysical wit. As one of Bearing’s students (Sara Detrik) suggests, perhaps Donne made his poetry so difficult to mask the agony of his search for the ineffable. The poetry is also a metaphor for Bearing’s life – unmarried, childless, with no living relatives. She has built her life around her mind and is now forced to confront and deal with a body that is failing. In doing so, she reaches out for human contact and receives it from Susie Monahan (Chuja Seo), a nurse who provides the professor tender loving care in her last days. 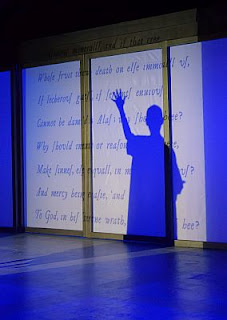 Under the direction of Stevie Zimmerman, Bearing’s odyssey is, at times, somewhat slow to unfold, perhaps due to the minimal scenic design by Emily Nichols that is dominated by an up-stage set of semi-transparent sliding doors that, on opening night, seemed to confuse the cast as to which way the doors should slide. The scene changes require that these doors be opened and closed numerous times, often unnecessarily dictating pacing.


The emotional impact of the play rides on the shoulders of the actor playing Professor Bearing, and Lande delivers a multi-level, subtle and, in the play’s final moments, heart-wrenching performance. Perhaps due to the theater’s acoustics, some of her lines, especially in the opening scenes, seem muted, but there is no problem hearing her as she paces about or lectures her “students.” One especially touching moment Lande creates is in the flashback to her 5-year-old self – the delight the “child” experiences as she grasps what “soporific” means is palpable.

The problem with Wit, if there is one, is not so much with Playhouse’s production, which is enhanced by Marcus Abbot’s evocative lighting, but with the play itself. Given the perspective of several decades (it premiered at South Coast Repertory in 1995), it is essentially a one-trick pony that rises and falls on the conceit that a woman who has embraced and donned Donne’s intellectuality must, in the end, accept that she is mortal and in need of physical human contact…and love. Hence the juxtaposition of Donne’s poetry with the “bunny” stories that the 5-year-old Vivian is entranced by and the “bunny” story Professor Ashford reads to Bearing as Vivian succumbs.
Wit may not be to everyone’s taste. Several of my colleagues have opted not to see the play given what they have experienced recently in their lives. That is understandable, but it speaks to the visceral nature of the play, for at its heart it is about the dissolution of human consciousness and the question of where all the knowledge and experiences we have accumulated over a lifetime go when we no longer “are.”


In his poetry, Donne posits an answer: “One short sleep past, we wake eternally / And death shall be no more; Death, thou shalt die.” The play’s final image suggests that when we leave our corporeal self we shall be raised to a higher plane. That, in and of itself, is sufficient to generate a lot of post-play conversations on the drive home. At the end of the journey, is there eternal darkness or a bright light that enfolds us and leads us to a higher, purer existence?


To quote the King James Bible, one thing is sure: “Naked came I out of my mother's womb, and naked shall I return thither.”