On The Road Again

The Road: My Life with John Denver -- Ivoryton Playhouse -- Thru April 24 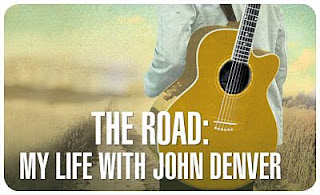 He recorded over 300 songs, with total sales of over $33 million. By 1974, he was ’s best-selling performer. He earned 12 gold and four platinum albums. He was named the poet laureate in 1974. Born Henry John Deutschendorf, Jr., he’s know to the world as John Denver, and his story is being told in The Road: My Life with John Denver, which recently opened out at the Ivoryton Playhouse. This two-hander written by Randal Myler and Dan Wheetman, and directed by Myler, tells Denver’s story through the eyes of a musician (Wheetman) who worked with the singer-songwriter over the years and, although there are some pacing and script problems, the magnetism, stage presence and musicianship of the show’s two stars keep you happily in your seat for the duration.


Less a juke-box musical, more a concert with anecdotes and asides, The Road offers the audience a ticket to travel down memory lane and the opportunity to listen to two tantalizing voices as they recreate an era – the 60s and 70s -- that, in hindsight, may seem a kinder, gentler time, though those of us who lived through it know the horror and heartbreak that was part of those years.


Although , in his songs, never really dealt with the horror, he did deal with heartbreak, and some of the most touching moments of the evening are when Danny (David M. Lutken) and, as listed in the program, the Singer (Katie Deal) offer some of the songs Denver wrote chronicling his love, his loss and his loneliness.


Lutken, as Danny, provides the framework, such as it is, for the evening, reminiscing about his own career and how it intersected and intertwined with ’s. Along the way, Lutken and Deal sing some of ’s most famous songs, including “Rocky Mountain High,” a rousing “Thank God I’m a Country Boy,” and “Sunshine on My Shoulder.” There are also some songs that may not be as familiar to the audience, and several, not written by but were integral to the era, including a rip-roarin’ “Johnny B. Goode,” originally recorded by Chuck Berry.


Throughout the evening, Lutken and Deal interact intimately, with Deal, at times, assuming the persona of ’s wife, Annie, and at other moments as Penny, Danny’s wife. The interaction is such that the evening’s final moments seem a bit unbalanced, for Deal leaves the stage, allowing Lutken to sing the final song to the blackout alone. It seems to be an emotional misstep. Not wishing to re-write the show, it might be more appropriate (and emotionally satisfying) to have Deal reappear and the two offer the tender “Perhaps Love” before the curtain rather than earlier in the second act, but what do I know?


Deal does reappear with Lutken for an encore: probably ’s most iconic song -- “Take Me Home, Country Roads.” The audience is urged to sing along (as they often are during the evening), and although it’s not a Mamma Mia dancing in the aisles response, voices are raised.


Although the script falls flat at various times, the evening is carried effortlessly by these two charismatic performers, who also worked together in , where the show premiered. Playing a range of acoustic instruments, and vocalizing and harmonizing as if they have been singing together since they were both in their cradles, Lutken, with his down-home manner wry smile, and Deal, a true “Geogia peach,” are a joy to just sit back, watch and listen to. And it would seem that the two just can’t get enough of what they are doing, for at the curtain call Lutken announced that after the Sunday matinee he would wander over to a local tavern for, of all things, a hootenanny (and drinks), and invited all to attend (bringing whatever instruments they so choose). Now, that’s a first.


The Road may not be perfect theater, but it is, in just about every other way, a perfect evening, especially for those who, at their weddings, chose a John Denver song to dance to as their first appearance as a couple.