"Bah-Humbug" With a Twist 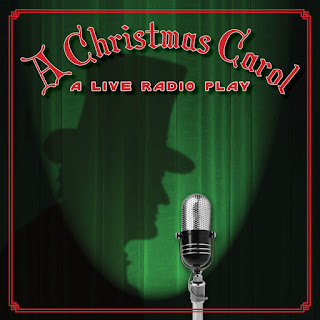 On the heels of “A Christmas Carol” opening at Hartford Stage comes “A Christmas Carol: A Live Radio Play” opening at MTC (Music Theatre of Connecticut) Mainstage in Norwalk. Yes, they’re both based on the same Dickens story, but the experience is totally different. Relying on the same spin he gave to “It’s a Wonderful Life,” playwright Joe Landry has given us a hybrid “Christmas Carol,” the conceit being that we are in a radio studio watching a live production of the play, so it’s sort of a play within a play within a production of Dickens’ tale. It may sound confusing, but it isn’t, and the result is a delightful evening that allows you to enjoy the Dickens’ story while, at the same time, enjoy watching actors do their thing, with scripts in hand, as they create characters who, well, create characters while generating their own sound effects using a wind machine, thunder sheet, chimes and various and sundry other noise makers.
The cast consists of five – Mike Boland, Elissa Demaria, Matt Grasso, Kaia Monroe and Jacob Sherburne – but, as you well know, there are a host of characters in Dickens’ story, so the five take on many guises as they rush from microphone to microphone and adjust their accents and delivery to conform to the characters of the moment. Again, it sounds confusing, but director Tim Howard keeps things easy to grasp.
Since it’s a radio show, there must be commercials, and Landry, with tongue in cheek, provides several, including one for a massive fruit cake (five- and ten-pound varieties available) that elicited chuckles from the audience.

There doesn’t need to be much explanation of the plot – just about everyone knows the tale of Scrooge’s miserliness and eventual epiphany, so the fun here is watching the actors shift, sometimes in mid-sentence, from one character to another. The basic set, created by Jordan Janota, is on multiple levels, which allows for Howard to move his actors around so there’s no visual ‘lock-down’ (i.e., actors in the same position throughout the show). In fact, given that the stage microphones (not live) are positioned on the different levels (something that wouldn’t actually occur in an actual broadcast), there’s almost constant movement.


The basic trick here is that the actors actually perform the play. By that, I mean that there are a lot of emotive gestures and character interactions that wouldn’t be necessary in an actual radio broadcast. So, the audience gets two plays for the price of one – the actors playing their roles as the radio personalities (with some rather humorous credits) as well as the characters in the Dickens’ story.


All in all, it’s a lighthearted, jolly evening of theater, and a good seminar on the art of acting. If you have any budding thespians in the house, bring them over to MTC so they can see, up close and personal, what the craft is all about – and how an actor can, in but a moment, go from a sophisticated gentleman to a young boy with a crutch who proclaims, “God bless us all.”


“A Christmas Carol – A Live Radio Play” runs through December 17. For tickets or more information call 203-454-3883 or go to www.musictheatreofct.com.
Posted by Geary Danihy at 5:18 PM